That’s a rhetorical question because if you’re a ski enthusiast who likes soft snow, the answer is probably yes. But what does it take to make those first tracks? Ever thoughtful, Dickie Fincher invited some long-time skier friends to explore the Innsbruck region and ‘forgot’ the lift passes…

The promises of secret powder, new areas, interesting kit and expert encouragement are, generally, enough to pique the interest of any group of experienced skiers. And so it turned out with this mini-expedition; everyone had their own reasons for trying touring and all had good reasons for not having done it before. Everyone was comfortable off-piste but generally didn’t do much because of concern about avalanches, getting lost, losing skis and all the usual reasons. The clincher to guarantee a decent experience was inviting along Martin – our backcountry editor and a mountain guide. Not the worst idea I’ve had. 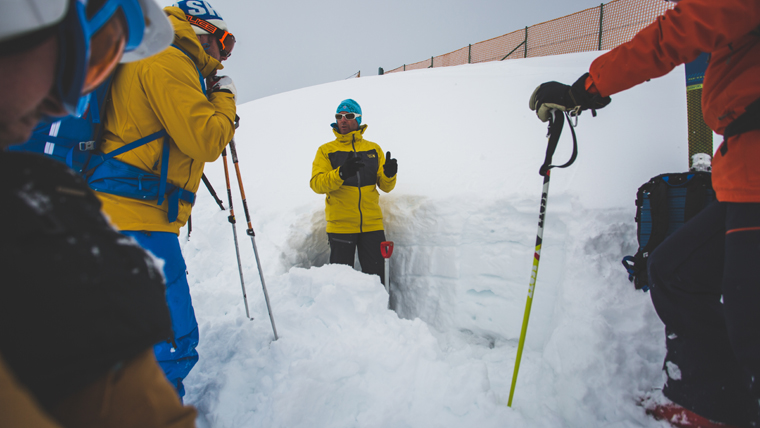 From a Fall-Line point of view, we had kit to assess which was pretty similar to anyone turning up and needing to hire gear, except that it was all next year’s demo kit… Scott Superguide boots and skis, K2 Coomback 114s, Black Diamond Carbon Converts, Marker Kingpins, Fritschi Vipecs and several other core pieces, plus Mammut and Haglöfs clothing and Ortovox transceivers were assessed over the three days. Never waste a day, that’s our motto… assuming we can be bothered to get out of bed….

To get the most out of a short trip to the mountains you want to be somewhere central like, say, a big resort. Or maybe Innsbruck? Again, it took a moment for the group to understand that basing our first night in the fine yet distinctly urbane Innsbruck Hotel was our key to unlimited touring and hidden powder stashes.

But… Innsbruck is the most resort surrounded city on the planet, with a galactic number of lifts within an hour’s drive which enjoy varying snow conditions depending on where the weather has come from. So, in a middling snow season it’s a pretty safe bet and one that both Martin and I were very keen to stake our trip on. The resorts themselves are more likely to trip up rather than off the tongue. Try saying “Glungezer” or “Gshnitz” in the same sentence without anyone responding “Bless you”. 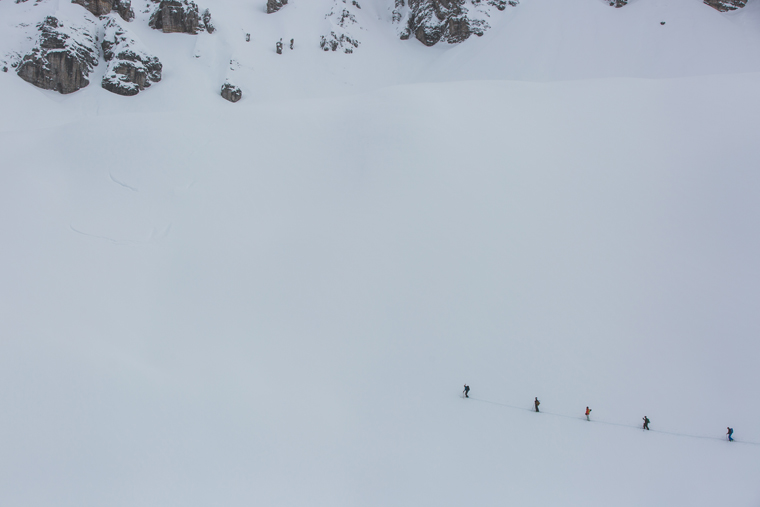 The snowpack and weather suggested we should try Axamer Lizum, Kühtai (on the socked-in day – mainly because we know our way around) and, ah, ah, ah… Glungezer!

Every touring day starts with a briefing, whether you’re with a guide or not. The route, any alternatives, snow conditions, technicalities and expected return time have to be agreed. On a trip like this we knew the routes wouldn’t carry us over any sketchy ground – the plan was to give everyone a taste of the mountains, not scare the bejeezus out of us – so there was no rope work. First steps on snow involved transceiver training; three of the group hadn’t used one before so we repeated it a day later when Martin also demonstrated snow layers using a snow pit. It was an accelerated masterclass in mountaincraft, which showed just how loosely attached some of the surrounding snow was.

All were agreed that skinning was a) a bit tricky to start with and b) let them access the sort of skiing they’d never normally do. Once in the groove – which took about a day – we plodded up a col to skier’s right of the Hoadl lift, under Widdersberg, Axamer Lizum’s 2327m peak. One good thing about this – it’s high enough to hold snow but low enough to avoid acclimatisation issues; try skinning up to 3000m after a day on snow and watch half the group breathe through their ears… 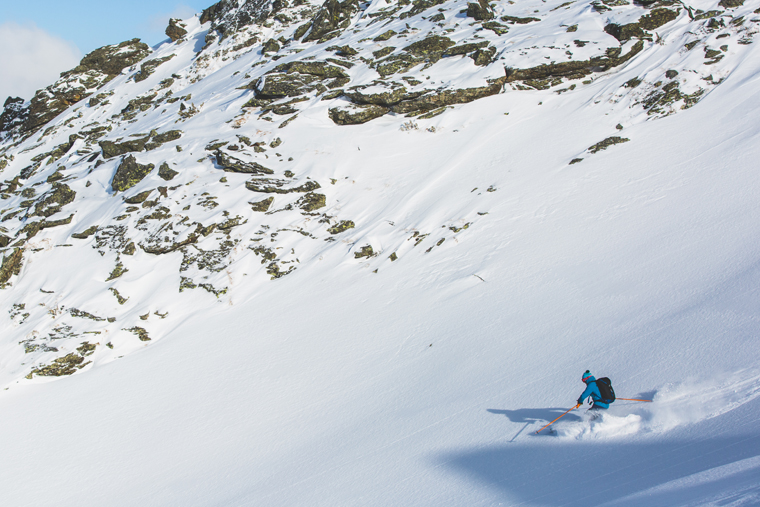 Anyhow, this also proved that on windblown snow the wider, shorter surface of a split board wasn’t as grippy as skis and our snowboarding chum Paul had a proper trudge to gain altitude. The ski back was straight into a wind-filled powder bowl, so all was forgiven once we’d whooped it down.

Kit wise, it didn’t matter what gear was being used at this level. From 114mm underfoot K2 Coombacks via 107mm Black Crows Navis Freebirds to 97mm Movement Apexes, all handled the ups and downs without comment. As with most Fall-Line trips we didn’t have anything sub-90mm, because the down matters too much…

Boot-wise, we had a selection of test boots including the Black Diamond Quadrant, Scott Cosmos 2, Dalbello Virus Tour and La Sportiva Spectre. All focussed around a good mix of up and down action, and all, again, didn’t cause any comment other than how light they were. Obviously there were fitting niggles because of squeezing into unfitted boots, but the days were designed to allow cooling off periods. Only tester Hugh had the short straw, having to pass over his demo boots to Guy and stick with his alpine versions – they clipped into the Fritschi Freeride bindings well enough, but with no flex and added weight are a right drag to skin in. 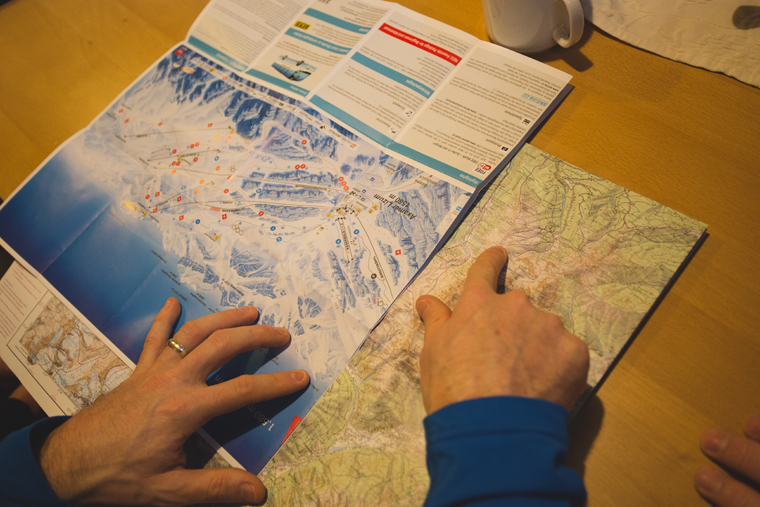 So, to sum up: first day was Glungezer – easily enough to explore and a very enjoyable resort feel, with a nice accessible wooded slope area opened up by the skins. Axamer Lizum was generally voted the favourite because of the routes taken into some proper mountain scenery, followed by some cheeky forest lines poached near the piste. Kühtai is a known quantity and has plenty to go at, but we had to play a careful game because the visibility was shocking. Martin and I would head back to Innsbruck without a qualm – it’s a superb base for day and longer tours.

Defining what should be in an ‘intro to touring and the backcountry’ trip is never straightforwards because the subject just keeps growing the deeper you get into it. Martin kept it all very accessible, with the right amount of guidance to give everyone an experience that felt different but wasn’t out of reach.

We’re thinking about opening this up to you, the readers. Anyone keen?

Innsbruck as a base

We stayed at Hotel Innsbruck, bang in the centre, and were on the slopes by 11am on the first day after getting geared up for touring, which is more complicated. So it works for a late-night arrival and can easily be used for a full stay. For the next three nights we headed into the wilds, all of 4.5km away, and stayed in Igls at the Bon Alpina –  it’s in the Crystal brochure as well as online. You’re up the valley and can look down on the city below – it’s all very surreal. For more info check out innsbruck.info.

More from the ‘How to’ series:

How to pick the perfect gear for a backcountry adventure

How to navigate in the backcountry