With the yen and snow falling at a magnificent rate, Fall-Line is off to the powder realm once more for a rapid tour of Tomamu, Rusutsu, Furano and, of course, Niseko

05.55 We’re going global. And for this little outing, our crew numbers Andrew, Simon and Mattie from sun-kissed Sydney; Travis from beautiful British Columbia (BC); and yours truly, from, er, glorious Macclesfield. This morning it’s fair to say I’m not popular. Not only has my godmother already set off my mobile’s klaxon-like ringtone at 3am Japanese time (for a vital chat about what I’m up to… bloody sleeping!), but now I’m trying to get ski dressed in the dark. With the loudest zip in the world. The Aussies, who I’m rooming with in our snug little pension, are being very good, but I’m sure by the 43rd opening of my bag they’re ready to throttle me.

07.31 Niseko is still sleeping. And no one is skiing the mountain, bar our tight group of five: me, a Swedish start-up couple now living in Silicon Valley and guides Matt and Pete. I know this as Hanazono, which alongside Hirafu, Niseko village and Annupuri makes up Niseko United, and is the only one of the four resorts here to offer a fresh-tracks early up.

Today it’s just us booked and we’re so ahead of lift opening time that we even have to squeeze in-between the stacked chairs (it’s so snowy here they have to bring them all in every night) to load up. Everyone has big smiles as – you guessed it, this is ‘Japow’ after all – snow is dumping down.

11.32 Best not tell the Aussies what they’ve missed or they’ll again think about throttling me. While Travis (currently living on Japan’s mainland, and our unofficial don’t-do-that-Jonny! cultural fixer) definitely will when he arrives tomorrow. As he’s been tracking the mega snow reports and buying the fattest equipment he can find on Honshu.

Previously, I’d always thought what a load of twaddle when people debated whether or not you can have too much snow. But I think they may be on to something. My first-day jet-lagged legs are shot. Already! But it’s a wonderfully happy, worn-out ache. This is why I’ve travelled 20 hours from the UK, and taken three separate flights to get to the land of 15m annual snowfall.

So far, we’ve twice lapped Strawberry Fields’ silver birch meadows and perfect mushroom drops, and now we’re onto Gate 5 (one of Niseko’s out of the ski area but controlled zones) and keeping ahead of the traffic. It’s been deep candyfloss so far, and I have to admit to popping into some of guide Matt’s lines – he’s leading – while pretending not to hear Pete’s tuts, who’s bring up the rear. All I can say is: thank god for rocker! Must get sugar for energy boost…

15.21 Team Australia are very kind. The Ashes have only been mentioned once, and Andrew kindly showed me how to put my iPhone on silent. They are instead punishing me by showing me their ‘special’ route. This involves arcing into the Hanazono side’s lower trees, well away from the usual lines, where they have made their own track. With a little hike to finish.

As we do it for the second time, it’s clear they are having far too much fun, as to get through the shin-deep snow, then almost packed trail, you have to take the not-much-wider-than-your-waist trees at full chat; with just one set of ski marks to stay in. I’m knackered! Bring on the onsen.

08.32 It’s all aboard the Rusutsu express to check out the other side of Mt Yotei, the Fuji-clone that dominates this part of the world. Or it would be if the bus had turned up. Andrew is confident. He’s hopped on this plenty of times for the one-hour 1000 yen (£6) ride to the nearby – as the crow flies – resort. I maintain Hokkaido is cracking up. This is Japan, after all, and we are running more than 60 seconds late. Outrageous!

13.31 The bus has arrived, bowing has been done, pictures of carousels taken (what could be more natural than a fairground carousel in the ski ticket office?) and now I’m ripping down East Vivaldi.

Things to report? Definitely more of your standard Japanese resort than Niseko. In essence, huge hotel and slopes without much else at the base. Bar a… rollercoaster! Sadly it’s not operational in winter. But the new sidecountry park is not far off. It’s like the nature-inspired Burton stash in Avoriaz and the features are massive. The biggest, a sort of branched rainbow rail/north shore, must have a 15ft drop off the side if you mess it up.

15.55 Like much of Japan, Rusutsu has a slightly opaque stance on tree skiing/sidecountry. In short, it’s forbidden. But no one seems to mind as long as you don’t totally take the p*** (such as enter at the top of a lift). Cutting skier’s left off the mountain’s biggest hill (just 994m, but it feels a lot more), I mow down through the nicely-spaced trees, across first Isola A, then Isola B, onto Isola C, and finally Isola D. Oh yes, they like order here, and glades. It’s all rather… Steamboat. A thought that’s not so much stumbled upon, as manually inserted into the grey matter with two runs and the main mountain restaurant called, er, Steamboat. (The resort once owned the Colorado resort too, plus Tahoe’s Heavenly. Which explains the trails named Heavenly Spirit, Heavenly Canyon, Heavenly Ridge, Heavenly View – you get the message.) 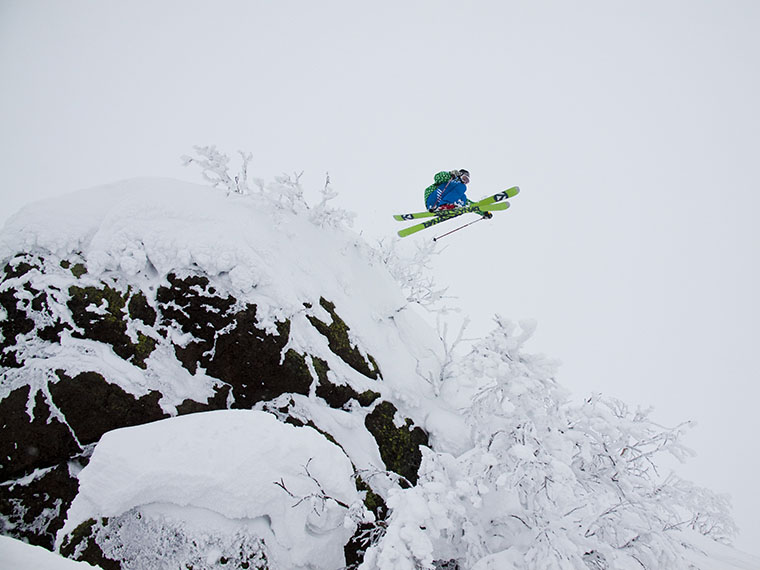 09.54 Travis and I have teleported to deepest Furano sidecountry and are on a rather famous trail called the Dam run. I say trail, but what I actually mean is tight, big trees and knee-deep powder. In places it’s waist deep, so it’s fair to say there’s not been
a huge amount of action in here. And the place is wonderfully quiet in comparison to Niseko, and even Rusutsu.

In fact, it’s a bit too wonderfully quiet as a dodgy traverse has taken us far from the ski area. Signs of ski life have disappeared and
I guess we are rather too close to a river for my liking by the gurgling sounds below us. Time for a 30-minute hike to safer ground, and a spot of light swearing…

11.54 Less ambitious, we do the Dam run right this time, by staying one rather than two gullies over from the left-hand flank of the ski area.

Giant pines, clearings to charge, a quick sidestep past the large concrete dam wall,
a mad and flattish charge through the narrowest trees and we’re back in the ski area. Phew!

14.32 Buoyed by still being in possession of our lift passes, we traverse under the ropes (rapidly, and politely of course) beside the brilliantly named Downhill Romance No.3, and have a little hike. It’s fantastic and untouched.

08.30 Another day, another resort. Today we are in amazing Tomamu. We arrived late last night and the place was like something out of Blade Runner. Two brightly-lit towers soaring out of the mountains. Looking out of our room on the 13th, or 33rd floor, I can’t quite remember which, were another two skyscrapers just up the hill. Incredible.

I’d been told this was the high-water mark for Japanese bubble excess, but I think it’s rather fantastic. Especially as most of the guests, according to Satoshi who’s showing us round, are keener on trying the hotel’s enormous wave pool than the slopes. As we walk through I spy a mighty five cars in the main car park. Crikey, this might be rather good.

12.40 With Momo, our guide, leading, we’ve charged the entire left of the piste map. Here, rather excitingly, tree skiing is allowed. So we go for it big time. Apart from the warm-up groomer, it’s wood and bamboo all the way. We often start on one of their recommended off-piste trails, then dive off.

The rep is for less snow here than most of Hokkaido. But there’s plenty for us. Especially in the designated powder (sidecountry-type) area, which you have to sign up for and wear a helmet in.

It’s shin rather than thigh-deep, but I’m having, maybe, my best day of the winter so far. We charge, charge, charge, through the light powder, then go some more. And all the time there’s pretty much no one around.

14.01 “Must get fitter for next season,” I mumble as we hike the Tower mountain for the second time. It’s just 20 minutes from the top chair, but with no bootpack established it’s hard work.

I’m amazed no one has been up here yet, as we can see from the untouched snow. In most, even modest, resorts this would have been gobbled long ago.

We rip down, making outrageously wide, surfy turns. It feels awesome. So light, so effortless. It’s not steep or long like Europe, but who cares. It’s going to keep me smiling for some months. FL