Drive from the Engadine in Switzerland to head over the Reschen Pass to Italy and you find yourself briefly in an easy-to-overlook corner of Austria. You could zoom past the pretty town of Nauders and, depending on the weather, not even notice the ski slopes above. That would be an error. 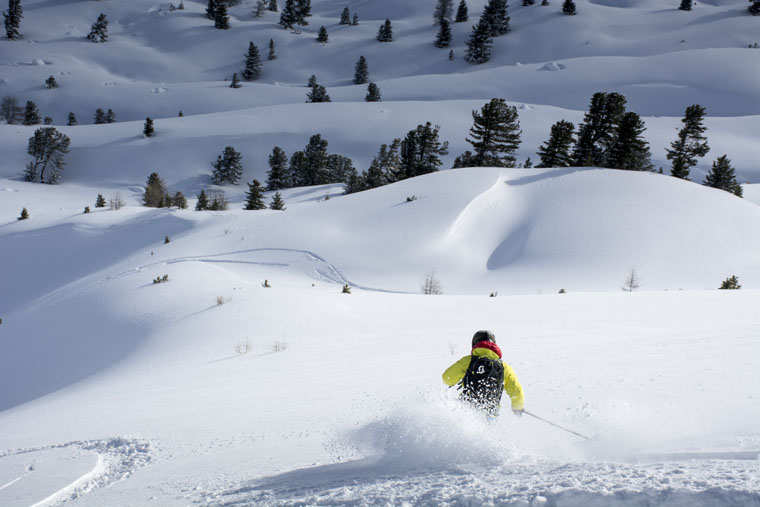 It’s definitely time to apply the ‘just because you haven’t heard of it…’ rule. Nauders, less than 90 minutes’ drive from Innsbruck, is one of those epic spots, benefitting from interesting geography – some great mountains to ski, with around 1300 vertical metres from top lift to base station – and a location which collects snow from various directions. You can also enjoy the novelty of skiing three countries in one day – the resort is linked with Haider Alm/St Valentino (Italy) and Schöneben/ Belpiano (Switzerland).

There are of course classic freeride routes to explore and classic freeriders to guide you. One of them, Basti, of the Nauders Interski ski school, is apparently also a part-time pirate to judge by his beard. Just don’t be fooled by the nautical look: he skis like a maniac.

We hit the resort in the teeth of the season’s most epic windstorm. Much of Europe was shut – not just planes, but trains and roads too, while just to the north of us in big resorts such as Ischgl, you were at risk of dissolving and being washed down the plug-hole after several days of enforced spas; skiing was not on the menu. But in Nauders, the late-season green fields surrounding the pretty farming town (it’s a real place, not just a resort) turned white again overnight and the ski domain above caught a serious amount of snow in a very short time. 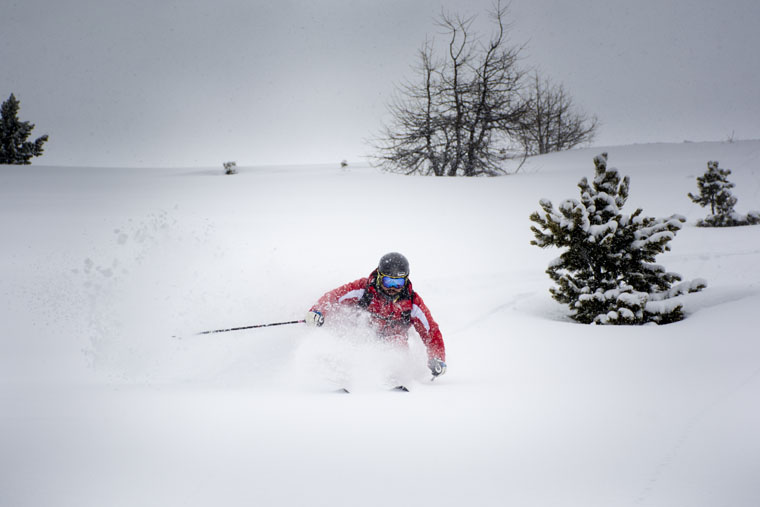 By some quirk of nature, the wind wasn’t too bad even if you couldn’t say the same for the visibility. But that’s an overrated requirement, especially with Basti’s red jacket to follow; what should have been an exploration of the outer reaches of the domain and to the peaks beyond turned into a two-day powder fest, never more than a few hundred metres from a lift.

There are several itineraries marked on the piste map. The two from Gueser Kopf will have to wait for next time as the Tscheyeck lift couldn’t run in so much wind and snow; likewise the Gaislochbahn, which serves another short itinerary ‘Down Under’, below the lift line. The remaining two from the top of the Almlift drag were just a starting point for Basti, who knows lots of good routes down into the treeline (about 2200m here).

It’s the kind of forest to convert non-tree skiers – wide open and easy angled to start, for high speed sweeping turns, then intensifying in density and pitch but with some perfect open gullies allowing you to remain fluent (and of course knee-deep powder helped to make everything seem alright). Finally you’re into the thick of things, by which time you’re properly stuck in and have at least half a chance of doing yourself justice. 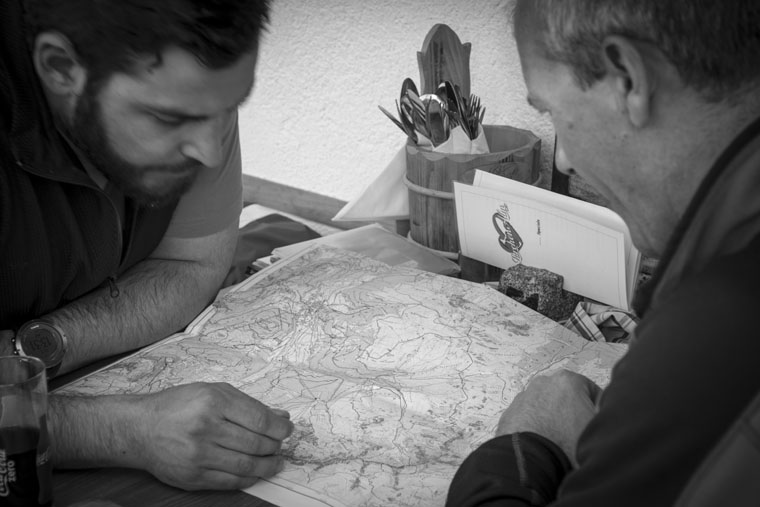 And with Basti navigating, we always seemed to arrive effortlessly at the Lärchenalm restaurant, which knocks out the kind of food you want to be eating when halfway up an Austrian alp; it’s rightly popular, but Basti’s piratical glare (or maybe he’s just sleeping with the right people) earned us a table every time.

Though it snowed almost continuously for 48 hours, the sun burst through from nowhere for just long enough to snap some pictures and check out the view. Even with a bit of visibility, the stuff we had come for – the summits and beyond – would be out of the question for as long as it took for the snow to stabilise. But a glimpse – of the view, and on Basti’s map – was enough to ensure we’ll return to hunt for hidden treasure, and of course to check on the progress of Basti’s whiskers.

A bit of a climb beyond the lifts are some of Basti’s favourite routes:

Ski the north face into Ganderbild, then head up to Goldseen and on to Pedrossschartel; from here, follow the ridge over the Mataunkopf to Saletzjoch from where you descend the Saletztal back to the bottom of the Tscheyegg chair.

Along the ridge north to Schafkarkopf and down past a weather station for wonderful ‘firnschnee’ in spring; or continue from Schafkarkopf to Schartlkopf before heading roughly west on a ridge to (a) ski the Valdafour south face down to the lift base or (b) head north-west, down to Novellesboden, and onto the hamlets of Novelles and Stables above the village of Nauders.

Taken from our Explore Europe issue, out now.