Cheap eats and drinks, guaranteed snow and a flourishing freeride scene make this remote, high-altitude Italian resort worth the transfer

Here’s a resort that’s so high, so remote, so tucked away that it’s exempt from VAT. Yes, back in the day (1840, to be exact), the powers that be deemed Livigno, situated high on the Italian-Swiss border, such an undesirable place that the only way they could get anyone to live there was to give it a special tax status… More fool them! One-hundred and seventy-six years later and it’s a well established ski resort offering guaranteed snow, varied mountains and cheap beers. 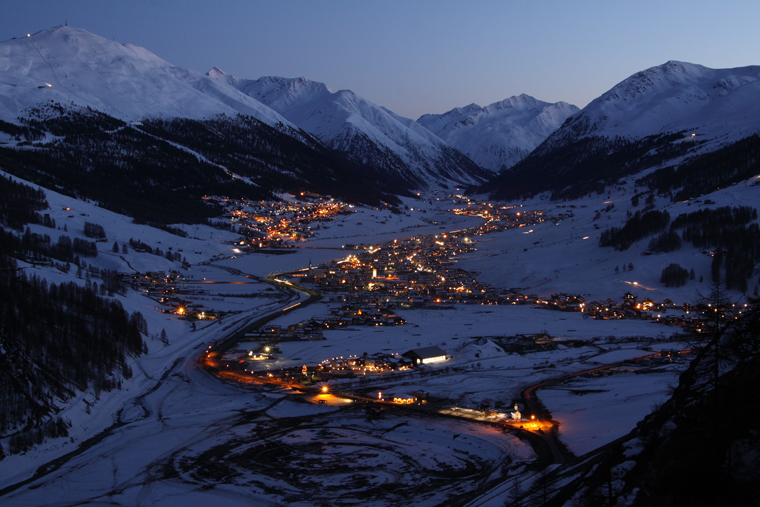 Better still, after a blanket ban on off-piste skiing (crazy, we know), Livigno is now home to a blossoming freeride scene, with extensive high-alpine routes circling the resort and even a bargain heliskiing outfit (€275 for two drops). We’d highly recommend a guide though. The name Livigno comes from the German for ‘avalanche’ (‘Lawine’) thanks to its steep valley sides and big snowfalls. Meanwhile, the pistes are the perfect mix of beginner-friendly blues, intermediate cruising reds and challenging blacks.

With skiing between 1800 and 3000m, the season lasts from November to May, and, thanks to a cold valley floor, snowmaking can kick off early even in the most disappointing of seasons. Its high altitude position also makes for some dreamy backdrops… well, on blue sky days anyway. If you end up here in a snowstorm, we recommend hitting the bar and drowning your ski sorrows in that bottle of duty-free vodka…

Adam Evans has lived in Livigno for 15 years and runs Livignoskiholidays.com, which organises package and tailor-made holidays to the resort.

Skydancer is a wide, gentle red which gets the sun before anywhere else. Head there first thing for perfectly groomed corduroy that will ease you into the day.

Livigno has made a name for itself as a freeride destination so there’s plenty to pick from, but my favourite spot for fresh tracks? Off the back of Mottolino, where there’s long, open terrain down to the village of Trepalle (and a chairlift to bring you back into the ski area again.) If you’re willing to hike for your turns, there’s a stunning backcountry route from Monte della Neve down to Vallaccia that takes you far away from the lifts. There is a daily avalanche bulletin at the bottom of the lifts as well as freeride checkpoints, but if you want to get the best out of your time, hire a guide. And remember that in Italy you are legally required to carry a transceiver, shovel and probe when heading off-piste.

The best thing about living in Livigno is…

It is one of the most picturesque villages in the Alps and has a fantastic variety of slopes to suit all levels, along with one of the top parks in Europe (it plays host to the Nine Knights freeski competition every year). Its unique duty-free position means you can choose from hundreds of good value shops and restaurants, plus there’s unreal après, superb nightlife and skiing from November to May.

The biggest misconception about Livigno is…

The transfer time! Yes, it’s longer than a lot of other places but it’s still only two hours in a taxi from Innsbruck or just over three from Milan. I always say to people, “What would you prefer, an hour and a half transfer to somewhere with unpredictable snow or three hours to somewhere with guaranteed snow?”

It’s a cyclist’s paradise. Even in winter there are fat bike tours but the summer is huge for mountain biking, fat bikes and racing teams.

On the Mottolino I would head to Camanel at lunchtime, with music blasting on the terrace, fantastic views and all the typical mountain food you would expect. On the Carosello side, try Tea Borch as it’s one of the only mountain restaurants with freshly cooked food. The only way down is a black run, but if you’ve eaten too much pizzoccheri – a local buckwheat pasta, cabbage and potato dish – then there’s a free Skidoo back to the village.

For cheap eats in town…

For excellent pizza, Bait dal Ghet is one of the cheapest (don’t expect to pay more than €9). They don’t take reservations so there’s often a queue, but the owner has been known to bring out complimentary crisps and shots while you wait…

One of the best places to eat out in Livigno is at the Hotel Bivio. It has two separate restaurants, the atmospheric Bistro or the Cantina, which is the place to go for that special occasion. The food is cooked right in front of you and there’s a choice of more than 350 wines.

The Alegra never fails to deliver with the best atmosphere, the best après and a lot of free shots. Once you step inside it’s very hard to leave! If you’re up for a late one, Miky’s Pub is the place to go. You head down a slide to get in (yes, really) and if it gets busy they slide the walls into the roof and the place suddenly doubles in size.