It’s official. The Jump and Eddie the Eagle’s new biopic have propelled ski jumping back into the mainstream. Here’s how to do it (properly)

Channel 4’s The Jump has put an alarming amount of ‘jeopardy’ into the reality TV genre.  Celebs are properly hurting themselves and confirming to extreme-sofa athletes nationwide that ski jumping is quite rightly off-limits to punters and best left to Eddie the Eagle.

Talking of whom, Eddie the Eagle, the movie, is now out and, allowing for artistic licence and a fair amount of schmaltz, it’s an entertaining film. But, like The Jump, it does nothing to convince anyone that ski-jumping is a sensible thing to try.

Back in 2012, Fall-Line sent me to a small village called Marbach, in the Swiss canton of Lucerne, to meet a guy called Stefan Wittwer who would apparently have me launching off a ‘K60’ ski jump within an hour or two.

‘K60’ refers to the maximum distance the ski jump is designed to let you land safely. Leap beyond 60 metres and you smack onto flat ground and it’s good night Vienna. So said Stefan cheerily, as we met at the chairlift to gaze up at the ski jump; looking, as it did, like a huge execution scaffold. 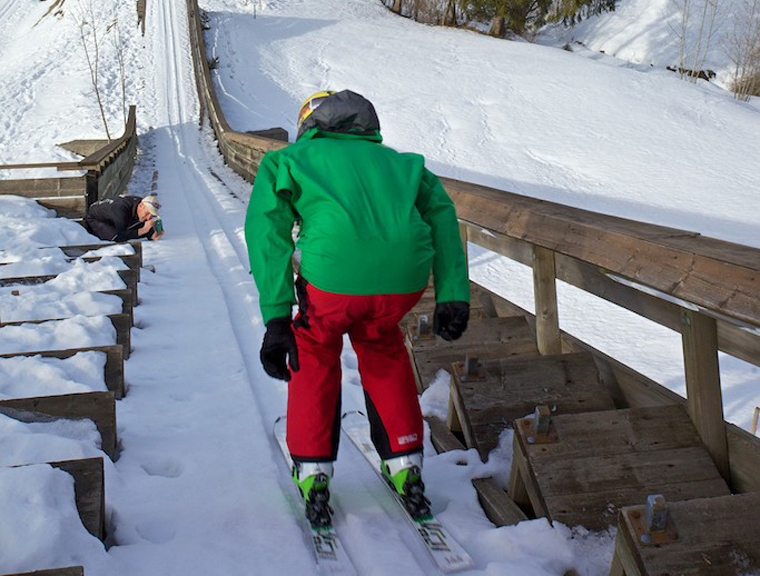 I eyed this wooden edifice warily, calculating the mass x acceleration likelihood of my ‘out-jumping’ the landing slope. Best not to think about it. Instead, Stefan, who used to coach the Swiss Nordic Combined B team (Nordic skiing and ski jumping), ushered me into a short pair of regular alpine skis and bindings. Not for me the huge skis with lifting heels.

Standing below the takeoff platform of the ski jump, Stefan explained the basics of launching yourself off the side of a hill. Beginners start with a short ‘in-run’ down a slope parallel to the proper jump, landing on the same area but at a lower speed to keep airtime to a minimum.

The idea is to crouch in a downhill racing position, but with your arms straight back clutching your backside. Keeping your weight pressing on the front of your boots, you extend your body straight up as you hit the edge of the take off ‘table’.

As you start to descend you put your arms straight out to the side for balance and then land with your skis parallel and one slightly forward of the other. The slope levels out then goes uphill to help slow you down.

Timing is the key and Stefan was quick to spot any lack of commitment to the take off. To be fair, I was never going to give it max on the first jump. But it’s pretty straightforward. And when I realised I wasn’t going to die, I started to try to get the timing on the jump for more distance.

After a few more confidence-builders, Stefan said he was pleased with my progress.  We moved up the hill for ‘phase two’. We were still not on the K60 jump but this one meant the in-run and airtime would be a little longer.

From the moment you push off, you have to commit. The landing slope is so steep that you can’t see it, just the edge of the take-off table – the place where the twin tracks disappear over the edge of the abyss.

The upright position in the air is pretty stable and as you’re looking up and forwards, you’re not feeling as though you need to spot the landing. The angle of the slope matches your trajectory so the moment of impact is pretty gentle – but fast. I scream up the opposite side of the slope pulling some major stop turns; arms still out to the sides.

The moment of truth arrived soon enough. Stefan, in the quiet way of mountain men the world over, nodded his head up towards the ‘K60’: “you want to try it?”

Stefan has never seen a Brit ski jump – apart from Eddie the Eagle of course, he says with a chuckle. National pride was at stake.

Climbing the stairs to the top of the K60 ski jump I heard a slow, steady, funereal drumbeat in my head. I eased out onto the ‘seat’ – a metal bar across the slope – and slid my skis into the narrow twin tracks that in no way deviated from plunging straight down.

Atop this relatively modest K60 hill, I feel qualified to say that while Eddie may be a figure of fun to some, in my eyes, at that moment, he is as brave as a lion and a true legend.

Stefan did his best to be encouraging: “Will, when you go there is no escape to the side if you want to stop. So you must stay in the track and keep that pressure on the front of the boots, OK?”

Right then. It looked steeper than the lower in-runs. It is. Pushing off I have to get down and press my weight forward sharpish. As I rocketed down the slope all I could think about was not getting in the “back seat”. Spectacular though the pictures would be, taking off with skis out in front, followed by my flailing mass, didn’t bear thinking about.

I sprung up as I hit the end of the jump and felt a fleeting sensation of flying, rather than falling, tracking the trajectory of the slope to a relatively smooth and stable landing. It was exhilarating and I was back up and looking to improve my distance, maxing out, after a few more attempts, at 32 metres. No matter that alpine racers travel twice as far in a world cup downhill, Stefan told me it wasn’t too bad for a first timer, after an hour or so of instruction.

Eddie Edwards was the real deal, using the proper equipment and training. To give you an idea, he recently jumped a K60 hill in France, over 20 years since he last tried it, and flew 53 metres.

Stefan’s course is simplified and accessible but it isn’t for everyone. You need a certain confidence on skis and the rest is down to listening to the instructions, gravity and a bit of bottle. Stefan will teach groups (minimum five people) for about £230 for two hours, which is good value for a lifetime of bragging rights.

Marbach isn’t far from the powder paradise of Engelberg, so learning to ski jump could be an alternative day out if skiing conditions are poor. It might even work as a winter stag weekend, but I’d recommend total secrecy and not doing it just before the wedding – in case the future mother-in-law gets wind of the plan.