The honey badger is one bad-ass little critter. Cruising round Africa fighting lions and swarms of bees, according to the Guinness Book of World Records they’re officially the ‘World’s Most Fearless Creature’ and have even been to known to shrug off cobra bites in their insatiable quest for another midnight snack.

Line’s Honey Badger more than lives up to its namesake’s reputation: it’s one nasty, fierce little bruiser, pugnaciously rolling from park to urban set ups and stomping everything in its path. 20 foot booter or rusty rail to brutal flat landing, Honey Badger just don’t care. Honestly it’s a surprise they don’t come with a leather jacket and face tats.

However despite the über-tough construction the Honey Badger is actually a pleasure to ride. One of Line’s softer skis, its poppy bamboo core and symmetrical flex just beg to be thrown around forwards, backwards and sideways; while the early rise tip and tail lure you into unreasonably smooth and deep butters. 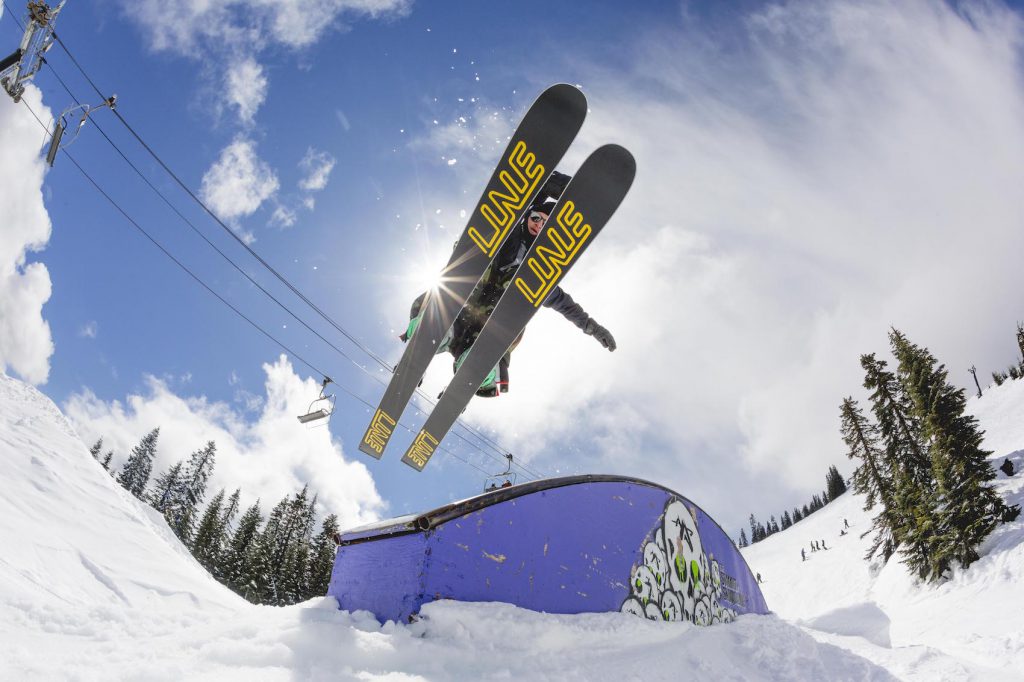 Fibre glass woven in four directions plus FIVE different turn radii shaped into the sidecut bring bomber stability to truck into icy take-offs and haul-ass out of rutted landings, without sacrificing manoeuvrability when jibbing around tighter terrain.

The thinned down tips remove mass from the skis extremities for a lower swing weight and easy spins, while a stretched carbon ollie band running down the length of the ski boosts pop for when you need a little more impetus to clear the knuckle.

The Honey Badgers are built with Line’s 1.7mm ‘fatty bases’ and burly 2.2×2.5 edges which ensures they can take all the beatings their fearless nature leads them into, shrugging off the sort of rail and wall slide abuse that would leave lesser skis crying in the slush. They’ll keep lapping up the slams all season long without complaints – so the only thing holding you back from finally landing that new trick is your own willingness to get back up and try again.

They’re great value too, packing all this attitude for just £375 – like their brethren from the animal kingdom their pound-for-pound performance knocks the competition out of the park.