It’s only taken the best part of a decade, but finally Fall-Line’s editor-at-large learns to ski tour

My touring, or lack of it, has long been a Fall-Line joke. And I can vividly remember being ribbed mercilessly in the office about it by our big boss and publisher (who, for a man of excellent girth has a strange love of all things uphill) in… 2010.

Why the wait? God knows. Especially with the whole industry going touring and backcountry crazy in recent years. But let’s just say my skinning stars have never really aligned – until now.

And in the Arctic Circle with Haglöfs, wind whipping in at well over 100km/h (closing all lifts at Riksgränsen, Europe’s most northerly ski resort), with a load of touring kit to try, and various sponsored skiers all booked to act as guides, there really is, finally, no excuse. 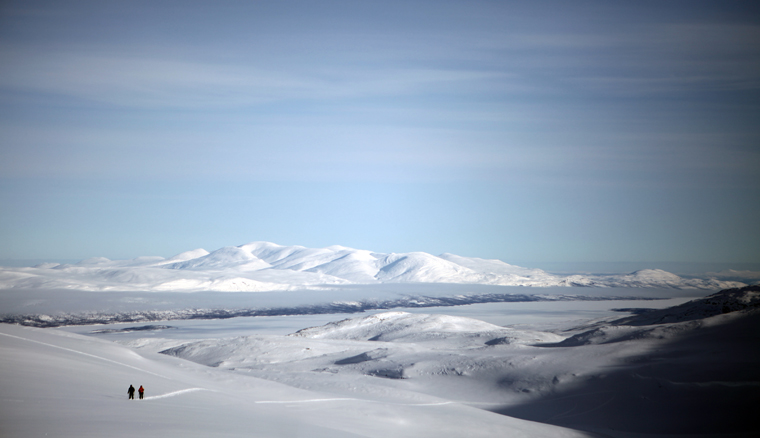 The lifts are closed but the touring must go on

The previous night I’d signed up (all events at the Haglöfs Arctic Weekend are free, you simply join what you fancy) to Beginners’ Touring with a bear of a man called Krassimir.

Noticing me reluctantly approaching the board for our class, pen in hand, desperate to spear off and join the advanced freeskiing group instead, he muttered in his best Borat (being from Bulgaria via Stockholm) “Me too please”. Before adding a sentence I couldn’t have put better myself: “I like downhill best, always downhill, but I suppose we must, everyone is doing it.”

Happily it’s not quite ‘everyone’ at 9am next morning, with skiing’s version of Gru from Despicable Me and I joined by just three others: Emily, Leopold and our leader/guide Klas. And after a quick probe/shovel/beacon check we’re off, down the hill, out of Sweden and over the road into… Norway!

Or we would be if the Bansko bullet were with us. And after much pushing and puzzlement, it turns out Krassimir’s been a little too keen getting his hire-shop skins on. Not ideal when you’re starting the day with a gentle half-mile downhill slide. It’s a good 20 minutes (we really are talking glacial speeds of progress) before our group is re-united on the far side of Riksgränsen’s only supermarket.

Despite the slow speed, everyone is rather perky. Even poor old Krassimir. The weather is not as wild as expected, Bjornfall, the 761m peak we’re climbing, looks easy enough, skins have split just fine, and better still mine have not wrapped round me like some sort of DIY mummification kit… 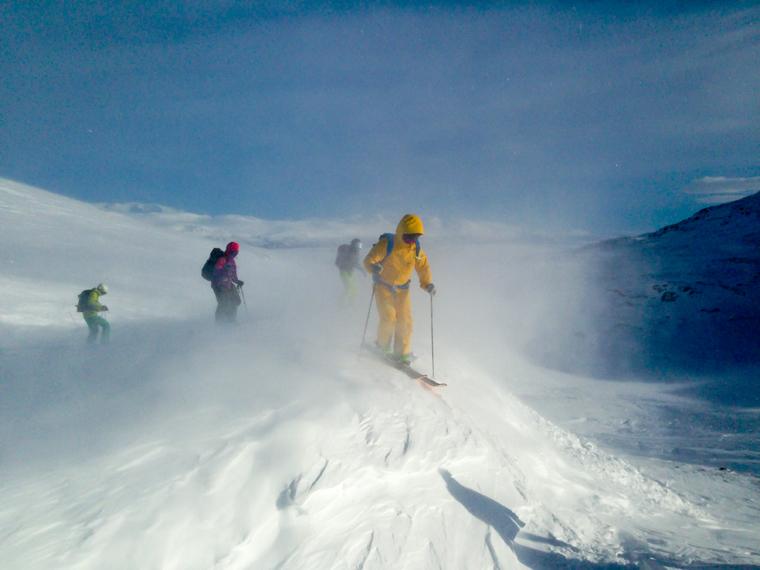 ‘Touring? Pah, piece of piss!’ I think. A feeling that lasts, oh, at least two milliseconds, as Klas (head to toe in Haglöfs yellow, like some sort of magnificent mother hen) points into the distance, gesturing towards a small group.

Same mountain – sorry, hill – as us, but they’re beasting straight up a not-quite couloir, instead of taking our sensible follow-the-contours, don’t-fight-the-geography line (Klas’ tip two for the day, after ‘don’t put your bloody skins on until the guide tells you to’) .

“I’m not sure that’s the best idea,” says our Swedish maestro, as right on cue the skier at the rear takes a nasty mid-turn tumble.

Looking round to gauge our lot’s reaction to the slip, I’m surprised to see everyone manically practising kick turns, clearly desperate not to fall like the figure a few-hundred feet in front.

Emily, a former racer, and Leopold are not too bad, but Krassimir and I… It’s like a very poorly prepared Winter Olympics opening ceremony when the display team have been on the sherry. And let’s just say we’re entertaining on the flat, never mind an icy 25° slope with the wind howling.

Still there’s no time to worry, as ski sensei is off, happily chewing tobacco and striding/sliding ahead like some sort of touring John Wayne. He shouts over his shoulder, “I hope none of you have got your boots tight (tip three). And just as importantly, “Don’t forget to engage walk mode (tip four), as that can make something very beautiful, very terrible!”

As various sets of eyes quickly check ankles and boot settings, he also diplomatically points out how it’s possibly not a good idea to skin under cornices (tip five) and generally keep your head up (tip six) paying as much attention to slides going up as you would down. Fair enough.

As to the actual skinning, get a slide right and it’s… strangely addictive. I like making good ground for little effort, gleefully closing-in on the skier in front. When you get it wrong and take a step, you’re wobbling out of the track and things aren’t nearly as pretty.

As for the dreaded kick turns, we thankfully only need to do a couple in the end (legs not too far apart, both poles planted – tip seven) and the three-hour up to the summit’s radio mast passes in a reasonably contented, not too sweaty, never too sketchy blur.

Yes, the down is over far too quickly, but for once, I’m quite proud that I, rather than some clunking great lift, made it all possible. Ok, it’s not quite the Haute Route, but it’s a start. At last…