The lift that locals simply call Pizza Box is a single-person, fixed-grip relic from the last century that opens up some of the best powder skiing on earth

It seems a stretch, even at the best of times, to travel 8000km (and 20-odd hours by plane) for a lift with the dimensions of a Domino’s box, that soars – quite slowly – for just 526m…

And these most definitely are not the best of times, with Japan currently closed to all foreign visitors (and at the time of writing no date for when that might change). But for the past 18 months, since Covid single-handedly locked down much of the world’s best skiing, this is the lift, and the spot, I’ve been dreaming of.

Why? Well, it’s partly down to the structure. And in the era of ‘got to be high speed, high capacity, always bigger, shinier, faster’ I love the fact King no.4 is an old school 2m/second clunker. A touchstone to Japan’s skiing past, the sort of steel-meets-wood warrior you see doing the hard graft in so many small resorts here on Hokkaido, the north island.

I imagine some days the King – birth date unknown, mother simply listed as Nippon Cable Co. – looks down over all the billions of yen being spent (with three vast new hotel complexes and half a dozen infrastructure/lift projects completed since I first started visiting just short of a decade ago) and sometimes smiles, sometimes shakes his head.

I feel exactly the same. But somehow, as long as King no.4 remains, Niseko just about stays Niseko, and keeps its soul amidst the rush to become the Whistler of the East.

All this would mean very little if the terrain were less bountiful, and the snow less consistent. But in my 150-plus days of skiing here, split across eight or nine winters, I can only remember a handful of occasions when I’ve wanted to be anywhere else. With most confined to December 2019, and the season plenty of locals call the worst in their lifetime, when the conditions were, rather like Europe so often is, fine on piste and patchy everywhere else.

In contrast, when I was in town in January 2016, it rarely stopped snowing. And a quick check of my notes tells me fresh powder every morning for 15 days straight. My margin scrawl says it all: “5m already – bloody hell!”

During these ever so snowy days I’d often take a break high up the mountain, thighs having happily had it, and sit with my back to the safety netting surrounding Hanazono’stop quad, watching King no.4 solidly clunk-clunk-clunking in the distance.

No loading faff, no lanes, just a short snake of skiers waiting for their four-minute ride to the ski area summit. I wonder where they’re off to, I’d think, as they slivered into position, carefully placing a bum onto the small square seat before grabbing the giant metal post as it rattled past?

Japanese pensioner in faded blue Descente onesie. Bound to be sliding precisely across to gate four for a shin-high bonanza of snow and silver birch via gully one, before cutting in-bounds to avoid the hike back to Hanazono– far right as you look at the piste map of Niseko’s four interconnected resorts.

Tall, long blonde hair, head-to-toe Peak Performance hero (or is that heroine? Hard to tell from this distance). Must be straight up the 20-minute boot-pack to Niseko’s highest point, the 1308m peak, before dropping in skier’s left for the south-facing back bowl and finish beyond the meadows at distant Annupuri, far left as you size up the resort map.

Telemark soul-skier, with skins peeking out from a battered, fixed-up-with-duct-tape pack. Up and beyond the hut that marks the top of Mt. Annupuri for views across the Sea ofJapan and 10km wide volcanic caldera Lake Toya, before zen turns on the way to a volcanic recharge in the waters of Goshiki Onsen – with a 30-minute mellow tour/ski back to civilisation afterwards.

The memories of all these missions (plus thousands of near-perfect powder runs down the mountain’s 70-odd marked pistes that are all possible from this wonderful lift) make me smile. You must come… when we are allowed… and bow to the King. He may be old but he’s definitely still gold. And with luck, here for decades yet, as the way the wind catches this part of the mountain means only a gloriously, ever so banged-up fixed-grip single will do.

ONE LIFT FOR THE REST OF YOUR LIFE – KRONPLATZ 1, ITALY 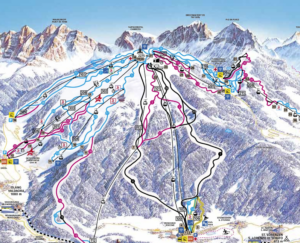 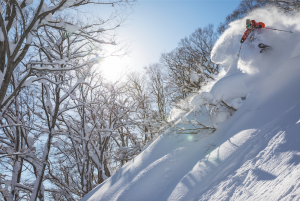 No queues, Pacific views and exceptional sidecountry make this one of Japan’s best ski lifts 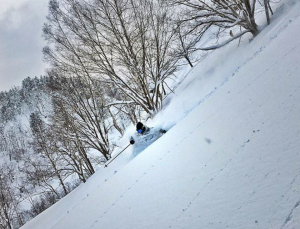