If you’d told me this time last year that little Tomamu on Japan’s north island would be my season’s best and most memorable day’s skiing, I would have laughed my arse off. “Hilarious,” I would no doubt have sniggered, suggesting planned trips to Verbier, Colorado, plus Hokkiado’s powder capital Niseko were a hell of a lot more likely to deliver the goods than this diddy 25-run resort…

But, sure enough it was my favourite 2014 experience. It really is, rather… amazing!

I know, I know, you’ve heard it all before. And I’m not suggesting you travel halfway round the globe just to ski an area so small they don’t even publish the acreage. Instead, be smart, base yourself in pow-fest and now-quite-cheap Niseko, then get the bus here for a couple of days as we did (under £30 one-way).

Arriving early evening the place was incredible. More like the set of Blade Runner than your average resort, with four skyscrapers shooting out of the hillside like giant light sabres. Rumour has it, this was one of the last crazy ski projects (there are plenty in Japan) to be green lit before the Asian bubble burst in the 90s, and I can well believe it.

God knows if my pal Travis and I stayed on the 13th or 30th floor. I couldn’t remember when we were then, never mind now. They have two identical linked towers to further add to the “where the hell did I leave my room?” jeopardy. You get the idea. It’s big. And thanks to all this accommodation stock, wonderfully cheap, with tower rooms including breakfast and one-day lift pass starting at a quite frankly ridiculous 9,000 yen (or £60). And most guests don’t even ski, preferring the huge indoor swimming pool with wave machines and lots of other Rhyl-suncentre-on-steroids goodies.

Before you get too excited, the snow stats are about half of Niseko’s 600-plus inches per annum. So, still respectable North America levels, but not quite Japowamazeballs (as my Taiwanese ski buddy calls the best Hokkiado powder).

When we arrived in town there was lots of further bowing and apologising as they’d not had much snow for a fortnight. Very unusual on the North Island in January. And as a result the cat operation (yes they have one of those too!) was grounded.

Walking across the car park to the lifts the following day though, things did not look half bad. There was only one car there at 9am, (so about 0.1% of what’s lining up in Niseko most days) and lots of white, well-covered pistes ahead. Satoshi, who was looking after us, had also arranged for a guide, Momo, to show us all the resort’s two distinct areas: Tomamu mountain (which tops out at the 1239m) and Tower Mountain (970m).

Now, hopefully Momo will not be reading this (and certainly not Mr Momo) as it really was impossible not to follow her and think, “Must marry Momo!” Five foot nothing, and never not grinning, she ripped it, with the most brilliant disregard for vegetation I’ve ever seen.

If you’ve not skied in Japan, the idea of skirting around and sometimes through bamboo and bushes will be alien to you. But Momo, desperate to eat up as many fresh lines as possible, took this to new heights, simply mullering through anything between us and potential powder. At times it was like shredding a mini rainforest, clearing a path with skis rather than machetes. All rather novel, and brilliant.

Dear Momo, once we’d filled in a quick form to enable us to ride the deserted expert powder area (yes, there was some – about 10cm), also had the right attitude to ropes. Normally, when you work for a resort, are in uniform, and have the head of PR with you, plus an idiot Fall-Line journalist, it’s really not the done thing to duck. And she didn’t, instead just flowing under in a perfect body-almost-horizontal, surfy, action. And that’s the resort all over. Unconventional, but somehow pure and right.

If you’re shaking your head thinking what a load of tosh at this point, I don’t blame you. I do sort of fall in lust with these crazy little hills, and possibly get carried away. But nothing illustrates Tomamu’s charm better than the hike above Tower Express. Looking directly down onto the two banks of skyscrapers, this 20-minute boot-pack opens up an abandoned lift line, wide-open pow field and some of the best trees you’ve ever seen. Yet when we descended one by one no one had obviously been here for weeks. With 20cm of powder down! In January! Madness, and definitely my kind of resort. FL 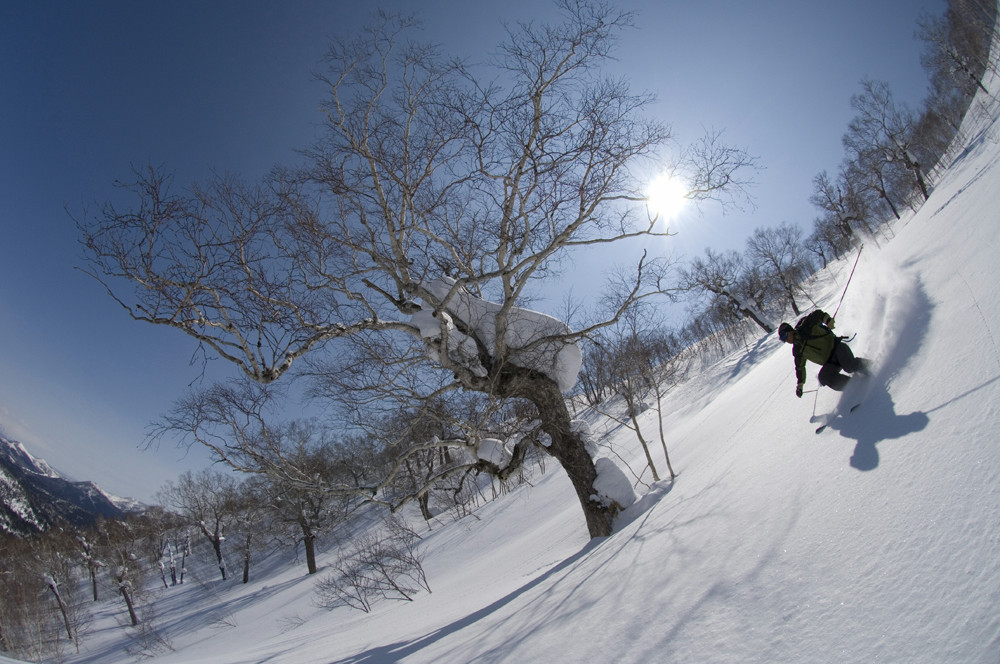