Matt Clark and colleagues skived off work to take advantage of Austria’s first big snowfall of the season, and were rewarded with swathes of terrain, all to themselves

Autumn is one of my favourite seasons in Austria. It’s a quiet and peaceful pause between the summer tourism season and the madness of the winter season, yet equally a time of change of excitement; you can feel and smell the approach of winter, and the very air seems pregnant with the potential of a fresh new season.

The first significant snow of winter 14/15 fell across Austria on 24th October. The build up to the storm was fraught with anxiety, at least in the LUEX Snow Travel office: the various snow forecasting websites continually switched expected amounts and locations up and down, east and west… Would we score, or not? On Tuesday things got serious, and the Austrian police issued a severe weather warning…

On Wednesday morning the first flakes began to fall, as clouds shrouded the mountains and winds howled around the peaks. We all went to bed early on Thursday night.Upon waking on Friday morning, the first thing I did was stick my out of the window: the storm had blown out, leaving perfect calm weather, stars still visible in the cloudless sky. The mountains were white. Game on.

The drive to Stuben | Matt Clark

Rounding up my colleagues Tom and Chris, we swiftly loaded the car and drove round to Stuben am Arlberg, arriving just in time to see the sun’s first rays playing across the peaks at Alpe Rauz. Gorgeous. And snowy.

After a quick laugh at the expense of the snowboarders stuck back in the office (HA!), we struggled into cold ski boots, attached skins to skis, and set off on the long skin up to Schindlerspitz. 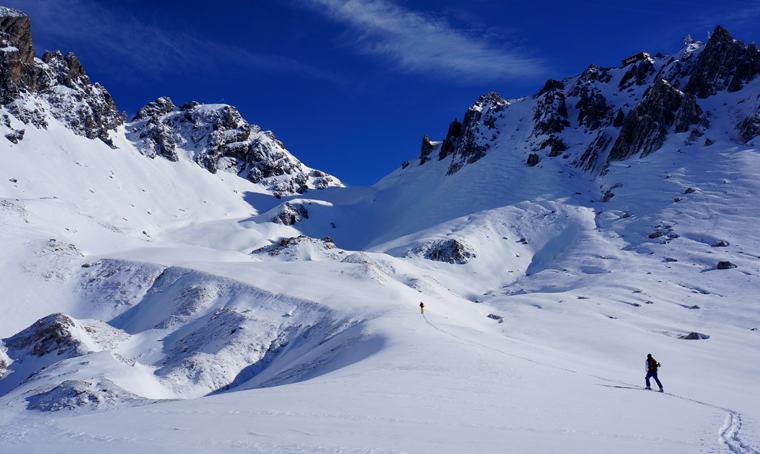 I hadn’t expected the first tour of the season to be easy, but equally I hadn’t appreciated just how much fitness I’d lost over the summer; too much tequila, I guess. Pausing to shovel some more chocolate chip cookies – breakfast of champions – in my mouth, I continued breaking trail upwards.

With perfect timing, we reached the top a few hours later, just as the sun started to bend around into the steep couloirs running down from the ridge. To our delight, they looked filled in enough to ski – it must have been a mega storm! After a wee dram of Glenfiddich’s finest to celebrate the new season, we each picked our own couloir and assessed snow conditions: perfect, wind-buffed stable powder. Excellent. Just watch out for the rocks… 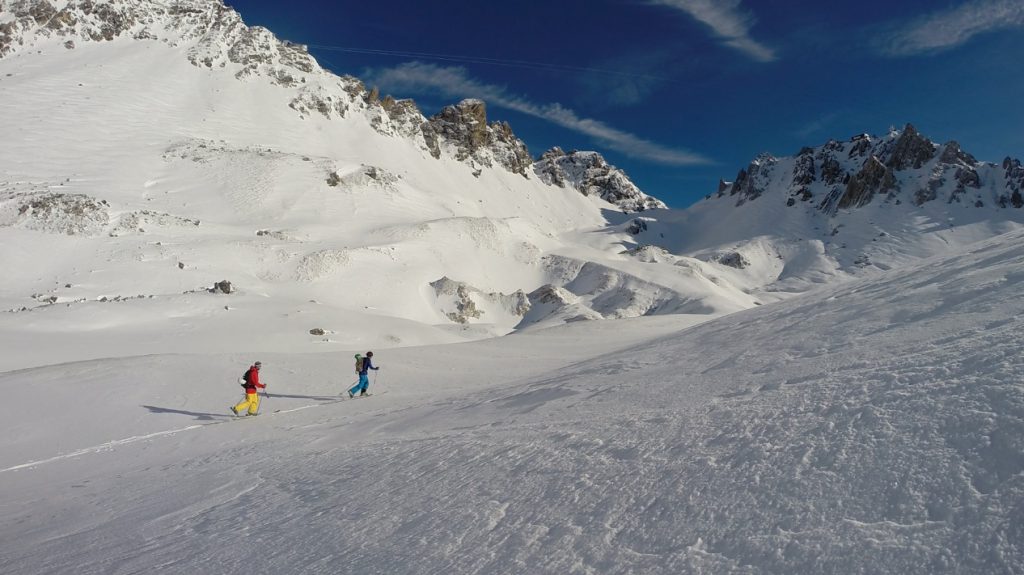 I approached the top of my line, and peered over the edge. It looked quite a bit gnarlier than I’d expected, with a few rocks scattered about in the first pitch. Good to go, but requiring attention and careful skiing: too risky to flash this early in the season. I waited for Chris to ski his couloir then set up the camera, and dropped.

GGAARRRRGGGGHHHHH!!! Rocks, rocks, rocks. There’s nothing worse than the sound of ski on rock; a brutal scrape more hellish than anything your high school teacher produced with chalk on blackboard. S***balls, the snow on the couloir was only 10-15cms deep. Glad that I hadn’t flashed the line (one speed check with this many rocks around would have sent me headfirst into the couloir walls), I gingerly picked my way down, opening up the throttle a little as I pulled out onto the open face below. 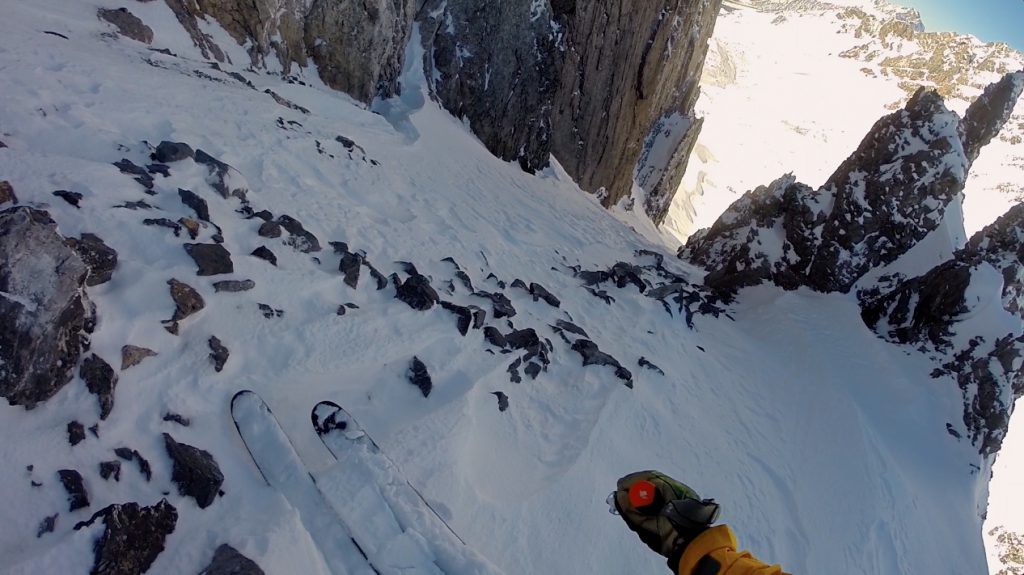 I reached the bottom fully stoked – it’s not often you get to ski terrain like that in October! Laughing like children, Chris and I turned to watch Tom. Dropping at high speed, he slashed a few hard turns… Then the snow sharks bit again: a big fall, and a nasty coreshot ripped out of his ski base, ouch.

Having received their p-tax and pride tax, the mountains seemed to relent a little; Tom picked himself and proceeded to absolutely charge the remainder of his line, presented with perfect snow on the lower flanks of the face. He certainly scored the best line of the day! 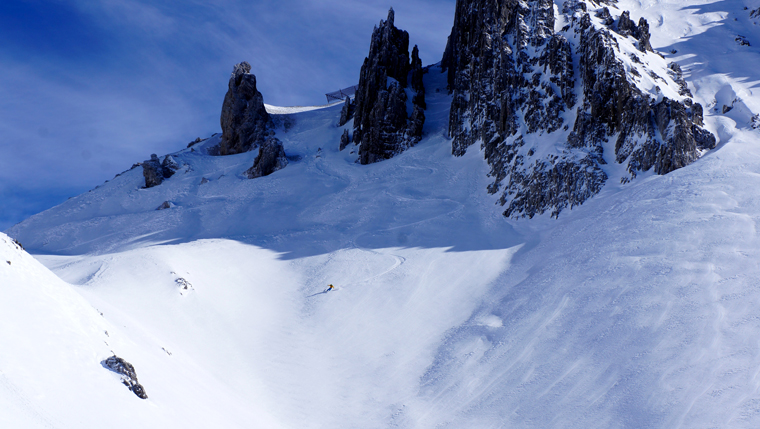 All together again, with stoke still running high despite the damaged skis, we exchanged group high fives. What a day! We’d all been playing in the Alps for a long time, but none of us had scored such great terrain so early in the season. Pointing our skis downhill once more, we enjoyed the mellow descent back to the car, playing with the little rollovers and windlips as much as aching legs allowed.

On the drive back to the office we reflected on the morning’s work. Great snow, incredible terrain, fresh tracks, and no-one else around… It doesn’t get much better than that! Roll on winter! 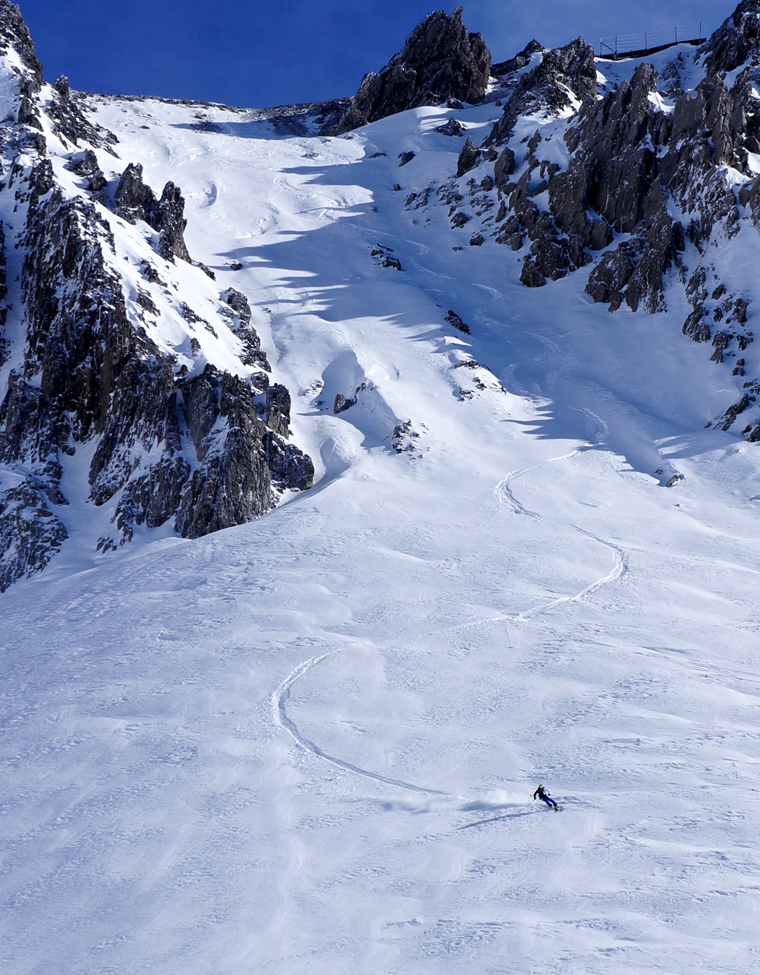