Trundling to the shoulder of the north face of the Eiger and the highest station in Europe, this railway offers up steep off-piste, the world’s longest Downhill and even some sledging.

OK, it’s not a lift; it’s a train. But the journey from Wengen to the shoulder of the north face of the Eiger opens up many riding opportunities, including a 4.48km run down the World Cup’s longest Downhill course: the Lauberhorn.

We board the train in Wengen at 1274m. It is basic but immaculate and clings to the mountainside on a sturdy cogwheel system. Tourists take the train all the way to the Jungfraujoch (3454m), changing at Kleine Scheidegg, and some tourers stay onboard too, to drop onto the Aletschgletscher towards Lötschental in the south west.

Riders hop off at the Eigergletscher stop at 2320m, just before the train goes into the tunnel. You’re on a massive rock buttress that’s an extension of the Eiger’s north face, looking down at Kleine Scheidegg. Below and to the right, take the steep off-piste face that drops towards the bottom of the Salzegg lift. It’s a good knee-burner after your jolly train ride.

Another option is to go out the back of the Eigergletscher station and down the black run to the right of the Fallboden lift. It brings you traversing round and down to meet the Lauberhorn track below Kleine Scheidegg.

Back on the Salzegg side of the tracks, swing left after that first long steep pitch towards Kleine Scheidegg. If you’d carried straight on you’d reach Grindelwald, 1300 vertical metres below. But caution: from Kleine Scheidegg to Grindelwald there are large nature zones, where skiing is verboten.

Taking the turn into Kleine Scheidegg, watch out for non-skiers crossing your path while gawping at the Eiger. A random option here, if you’re hankering for a new kind of adrenaline surge, is to drop the skis and head back to Wengen by sledge. Wyss Sport, opposite the station, hires out sledges for 15 CHF. But take care. I parted company with my sledge as I took a wrong turn onto the Lauberhorn course. Thanks to Ulrike and Monica who kindly told me where my sledge had entered the trees at Mach 6.

Back on skis, drop down behind Kleine Scheidegg and head for the Lauberhorn starter’s hut. It’s open to the public, so ski in and get your mates to snap your impressive launch from the start gate – or not, as the photo may reveal. The first pitch is wide and forgiving, so semi-tuck it and imagine the cowbells going ballistic. How long you hold that tuck depends on many things, but if you’re still hammering it as you approach the infamous Hundschopf jump into oblivion – well done, but stop. Now. Before it’s too late.

On the steep pitches, the bumps develop in a testy way, but if you’ve got visibility hold the tuck along the Alpweg trail, through the Kernen-S and into the compression under the Wasserstation bridge. 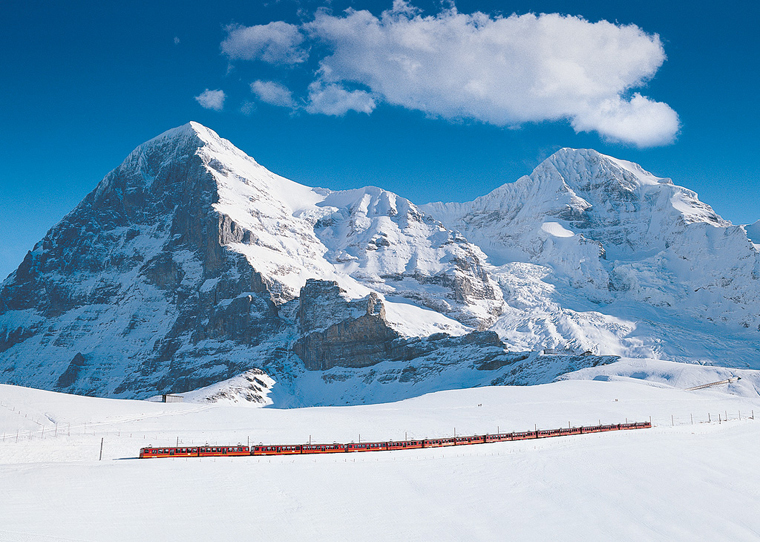 If you don’t take the Lauberhorn route, the eastern side of the Tschuggen and Männlichen peaks offer most of the skiing. The pisted runs are not that challenging but there are plenty of sidecountry dips and ridges offering some exploring opportunities.

The route down to Wengen from the west side of the ridge is pretty much all about the Lauberhorn course, you can even get your speed clocked on a short, steep speed gun section. It gives you an on-screen digital reading at the finish, but there are a few detours with powder sidecountry options out to the left of the race track.

At the bottom of the Lauberhorn, take the short Innerwengen chair to the top of the World Cup slalom course and ignore it – enough racing for one day. The run back to Wengen is a long traverse with some rat runs through the houses and a few underpasses.

You’ve earned a beer at the Tanne Bar, a stone’s throw from where you boarded the Jungfrau Railway train that morning to the top of Europe. Not bad. FL

Crystal offers a range of packages to Wengen, visit crystal.co.uk