Most mass-produced skis today are made in the Far East. Not a pair of Dynastars, finds Chrigl Luthy on a visit to the French brand’s factory near Mont Blanc, where there’s no shortage of pro riders to test each new design

“Welcome to the only remaining ski factory in France,” our guide Christine Marchand – head of quality control and head of the moulding department – declares, handing out white coats and protective goggles.

The Dynastar factory, situated in Sallanches, in the shadow of the Mont Blanc Massif, is a blend of wood-walled trophy rooms, modern offices, high-tech display rooms and warehouses filled with stacks and rolls of raw materials and machinery.

We start in the trophy room, where the heritage of a hugely successful ski manufacturer on the race circuit is on display. Skis decades-old line the walls, many signed by names as big as Marielle Goitschel, Guy Périllat and Marc Girardelli. Then there are the stars of the freeride scene past and present: Candide Thovex, Aurélien Ducroz and Reine Barkered.

Looking at the evolution of the ski design and at the names, Christine describes the current talent and what corresponding skis are on the horizon. A local team rider and contemporary Chamonix legend called Vivian Bruchez is working with them to develop a new super-light but high performance alpinism ski.

What is most striking in this room is the corollary between the skis and the skiers. The feats that have been achieved are a result of a partnership between engineering skill and skiing skill. You can’t have one without the other.

Anyone who has skied a pair of Dynastars can attest to the quality feel they have. Smooth and fast would be the adjectives I’d reach for first. My thoughts flash to the Dynastars I’ve skied over the years: S9s; 4X4s; Speed 63s; Candides; Legend XXLs; Chams. All sandwich construction. None of which suffered blown-out edges or chipped top-sheets despite years of use. 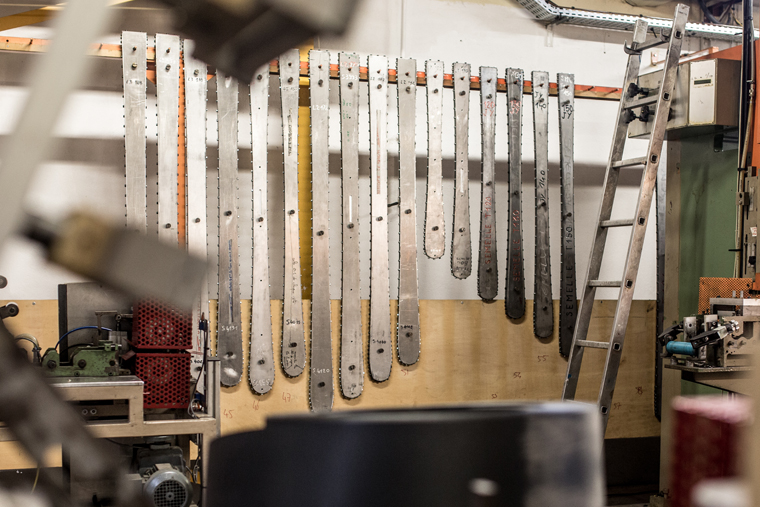 We learn that Dynastar does indeed produce a few more commercially slanted models here – the fun and accessible foam-injected variety – but that, above all else, the factory is dedicated to producing top-class skis.

Christine describes how important competition is for ski development, providing the pressure to improve constantly, and how the tech developed filters down to the more mass-produced models, raising the standard all round. Their racers and freeriders are testing the limits and we’re the beneficiaries.

Getting back to Christine’s opening statement, I know that perhaps the enduring legacy of a French factory bears little relevance to the British reader. But here it is, the reality that, at the heart of the Alps, there are still a couple of hundred dedicated people producing something they undoubtedly like to use on their days off.

Indeed, as the tour progresses around the vast humming compound, we are introduced to technicians who are working here off-season to supplement their income as ESF instructors during the winter.

It provides a contrast to the fact that nowadays the majority of skis are produced in the Far East, where the sport of skiing is only rarer than snow itself. Christine describes how, to them, the loss of skills and savoir-faire from outsourcing abroad would be too great a penalty to pay.

Time to watch how the skis are made. We see a rack of stencils for the bases: a woman is hand-cutting each Dynastar logo and inserting it carefully in the tips. 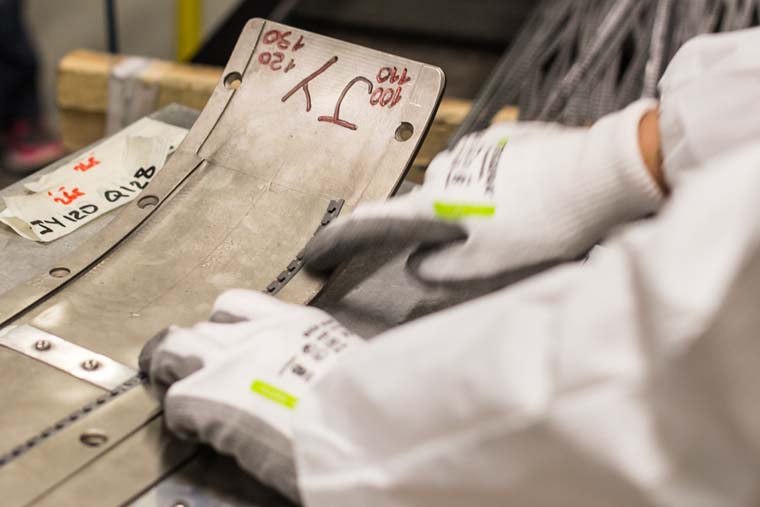 Around the corner we see another stage: the inking of the top-sheets, done in the same way as a screen print but with a super-precise machine. As we watch the woman peel away a layer and slot it neatly away for drying, Christine tells us that they make 300,000 pairs of skis a year here.

In order to see all elements of the 22 separate stages of the sandwich construction, we move fast. We see stacks of uncut wood being measured to size with jigs and stencils, and planed to thickness and width. I keep hearing mention of the wood type: paulownia. It seems to be the wood of the moment, with the highest strength-to-weight ratios of any kind.

We have a peek at the foam-injected skis. One of Dynastar’s long-standing employees (he’s been here for 20 years and shares a joke with another who has been at the factory for even longer) fills a cup with liquid foam and it immediately starts to expand and give off heat, until it’s as big as a loaf of bread, and solid. Space-age stuff, but I’ll stick with a slice of tree, please.

We enter a small room. Quality control. A lone machine stands in the centre housing a host of lasers for measuring accuracy of the skis, taking a few at random from every batch. We make our way to the showroom upstairs.

Next year’s models are on display. Plucking one of next season’s Cham models (which look super slick, by the way) from the rack, Christine describes how they will be altering the construction in parts for a snappier feel.

One of the key reasons of having a factory here, explains Christine, is the proximity to the mountains; it provides Dynastar with a testing ground for its prototypes. There is also a vast network of professional skiers and product developers, which allow the brand to refine new designs more quickly. 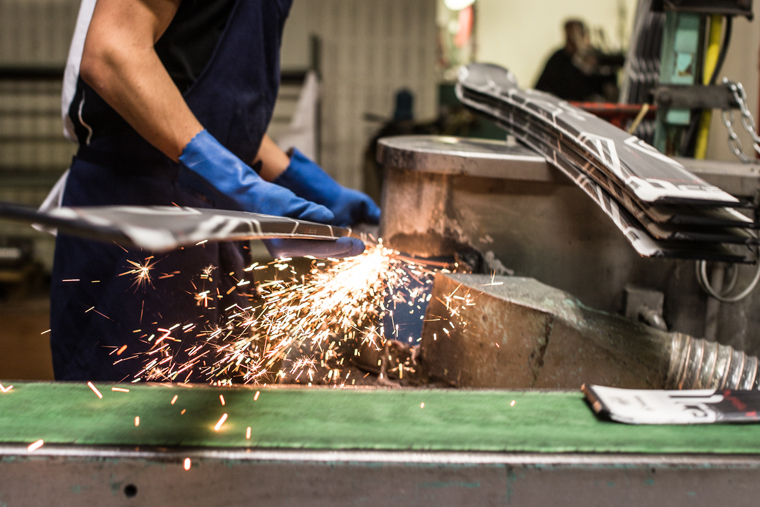 Tour over, it leaves me wondering if I know where most of the skis I’ve tried were made. It’s something I’ll think about in the future. All I know is whatever their origin, how a ski skis is what most people care about, and with Dynastar their skis speak for themselves. FL