Paddles and powder in the Finnmark Alps on Norways northernmost shores

We slipped across a dead-calm fjord like a tiny fleet of benign torpedos streaking across a mirror. The silence was punctured only by our paddles and the occasional chuckle as we reflected on the surreal serenity of our adopted mode of transport – surely the most unlikely any of us had ever deployed en route to skiing. We were in kayaks barely wider than our bums, wearing an extra layer of Gore-Tex over our ski clothes: dry suits in case we capsized with excitement. As far as the eye could see in every direction, steep mountains streaked with couloirs pierced the sky, their upside-down twins reflected on the water like a dreamy ski kaleidoscope.

We were in the Finnmark Alps on Norway’s northernmost shores. Well inside the Arctic Circle but, thanks to the tail of the Gulf Stream, in mid-May the temperatures were akin to the Alps in March. Just to the south-west lie the Lyngen Alps whose popularity as a ski touring destination has skyrocketed in the past decade, with over 50 ‘sail and ski’ boats operating out of Tromso and luxury lodges proliferating on land.

But Finnmark – a little harder to get to but no less spectacular – remains almost entirely undiscovered by outsiders. Almost. We were here and we were discovering, thanks to Fred Buttard the founder of Upguides, a collective of French and Scandinavian mountain guides working together on various projects here in Norway and across the globe, with whom I’d had great skiing in France’s little-known Maurienne Valley some years prior.

Fred’s approach to ski adventures can best be described as immersive. And so in 2008, while the boat charters and luxury lodges went left, jostling for space in Lyngen, he instead went right – to Finnmark – and set about crafting authentic ski adventures in partnership with the local community. We would see the value of this approach almost immediately. An airline strike had left our guide marooned elsewhere in Norway and so we arrived at 3am at the tiny airport of Alta with no guide and no means of getting the six of us and our gear to Langfjordbotn – 90 minutes by car to the west. Not a problem, a friend of Fred’s had left us his people-carrier, with trailer in tow, in the car park – with the keys in the ignition. Car theft clearly is not a concern in Finnmark!

Guideless, we wondered how we would go about exploring Finnmark’s terrain which – even at 3am (come May at 71° North the days never end) – we could already see was mouth-watering as we wiggled along a series of Fjords to our home for the week in the village of Langfjordbotn. We needn’t have wondered. The next day there was a knock on the door of our cabin and there was Trond, an exceedingly jovial osteopath and – we soon learned – ripping telemark skier. He would be delighted to ski with us and share his knowledge of the area. Although we had already spotted a lifetime of skiable terrain in the immediate vicinity of Langfjordbotn, Trond wagered that Oksfjord, half an hour’s drive to the north would have better snow. Trond was right. Donning skins on the side of the road we could see little of immediate interest, but after 10 minutes skinning up a valley perpendicular to the fjord, a majestic amphitheatre of awesomeness revealed itself to us.

We were tiny ants surrounded on three sides by a veritable smorgasbord of epic skiing. The rocky sentinels on either side that had obscured our view from the road were in fact hewn with couloirs. Ahead of us was the Augusta National of mini-golf terrain and tucked around the corner was a relatively mellow, wide-open face. It was all caked with 30cm of ultra high-grade powder. “Mid-May!”, “Winter powder!” – we marvelled. Rich Jones, a ski instructor from Val d’Isère, and Dave White, a Patagonia and Armada-sponsored skier immediately scrambled in the direction of the couloirs while the rest of us went for the lower-hanging fruit.

I was intrigued to test the theory that touring from sea level was easier than doing so at altitude, and quickly discovered the difference to be night and day. We flew up skin tracks which, at altitude, would’ve had me gasping. Here, as in most of Finnmark, the summits were in the 500-800m range, which sounds tiny but was, we found, just about ideal in terms of balancing the up with the down. We managed four laps, our hoots and hollers as we pillaged the powder reciprocated by other members of the team elsewhere in the valley like a peculiar Viking call and response ritual. Rich snagged the line of the day, threading a narrow couloir, emerging from the two metre-wide choke in a puff of cold smoke.

Aside from the obvious appeal of gorging ourselves on uncontested Arctic powder weeks after the lifts had stopped spinning in the Alps, what had lured us to Finnmark was that which went alongside the skiing. And so while the staggering scenery and phenomenal skiing were the main event, the getting to it was an adventure in and of itself.

Describing the coastline of Finnmark as ‘fragmented’ does it a considerable disservice. And so while we would often begin our journey to the chosen zone for the day by car, we also relied on a variety of aquatic vessels (kayak, speed boat, car ferry) to reach objectives on the opposite side of a fjord inaccessible by road.

Our objective one afternoon was a meandering bobsleigh run of a couloir that wiggled this way and that before plunging straight down to the fjord’s edge. Having stashed our kayaks on a rocky beach above the high-water mark, we skinned around behind and scrambled up a steepening shoulder before arriving at the top. We dropped one-by-one into the helter-skelter chute, negotiating some tricky snow at the top and were rewarded with hero turns in smooth powder down the apron and back to our trusty vessels.

As epic as the skiing was turning out to be, Finnmark is better-known for and more frequented by tourists coming for dog sledding. We were too late in the season to travel to access our lines by dog-sled but that option exists until early April. We consoled ourselves by playing with some of the many hundreds of huskies that inhabit the village of Langfjordbotn – where canines outnumber human beings ten to one!.

Comprising an area almost three times that of Wales but only fractionally more inhabitants than Merthyr Tydfil, population density in Finnmark is… low. Road traffic is therefore non-existent, although our path was blocked on more than one occasion by herds of reindeer that seemed in no hurry to get anywhere in particular or out of our way.

On a bad-weather afternoon, we tried our hand at fishing in Jøkelfjord – reputedly Norway’s most cod-rich inlet. The pier from which we embarked on our mission featured recent pictures of local heroes clutching monsters almost as big as themselves, which suggested that our eventual empty-handed return was down to user incompetence rather than a scarcity of fish. Dinners were hearty affairs enjoyed at Langfjordbotn’s only cafe, whose walls were plastered with topo maps, washed down by excellent local craft beers. Reindeer stew proved more popular than braised whale meat.

Fred joined us midway through our trip, having returned from leading students enrolled on what must be the world’s best educational programme on a winter-camping ski traverse of a nearby outer-island. Along with avalanche researcher Bjørn Michaelson, Fred runs a six-month programme at the Alta ‘folk school’ where students from diverse backgrounds come from all over Norway (and further afield) to study backcountry skiing and travel, avalanche safety and ski mountaineering. I doubt they find many students skipping class.

Bjørn too joined us for our final day. A deep thinker with a wry sense of humour, he has also probably logged more time climbing and skiing in Finnmark than anyone on the planet. But even he admits that he’s only skied a fraction of the lines on offer, and – unlike elsewhere in the world where it excites no end of social-media chest beating  – he told us that first descents are so commonplace in Finnmark that nobody even deems it worth thinking – let alone talking – about. With Bjørn we explored an idyllic bay exposed to the open ocean nicknamed by those in the know as ‘Little Chamonix’ in reference – presumably – to the dramatic nature of the peaks that encircle it rather than the number of people skiing them. As was the case throughout the trip, we had the impression that we were the only skiers for miles around.

After our most challenging approach, zig-zagging in knee-deep powder 800m up a gradually steeping face we donned crampons to scramble up a final 45° chute. The view from the top – after three tough hours of climbing – was one I’ll never forget. Were it not overlooked by snow-plastered peaks, the white sand beach and turquoise water from which we’d just climbed wouldn’t have looked out of place in Hawaii. Behind us the real estate from our lofty perch to the horizon was an endless Breton shirt patchwork of white mountain and ultramarine fjord. The best was yet to come – a full-throttle, top-to-bottom thigh-screamer of slarving GS turns in hero-powder. We wrapped the trip with a pot of strong coffee brewed by Bjørn over a bonfire on the beach. Finnmark, you beauty!

SKI & STAY
Upguides (upguides.com) offers six days’ skiing with a UIAGM mountain guide and seven nights accommodation, including dinners and all transport in Finnmark, for €1995 per person.

IN SEARCH OF POWDER IN ARCTIC LAPLAND WITH FREERIDE ROYALTY 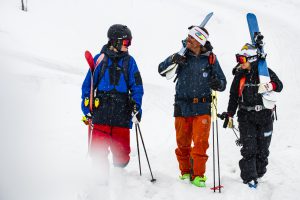 The best way to ski tour Norway is by train 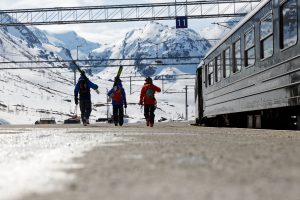