Faction’s zero compromise approach to the Prime 4.0 has lead to a seriously special ski that likes to ski big mountain powder, fast

The Faction Prime 4.0 is a seriously unique ski, and there was a fair bit of debate amongst our team as to whether to give them an award or not (luckily stubbornness prevailed, or maybe it was the threat of creating a whole new Digital Editor’s Award otherwise?). The facts are that the Primes make no compromises and probably won’t sell in great numbers – but that’s exactly what makes them so special, and why they merit our ‘Freeride: Best for Big Mountain Rampaging’ award. 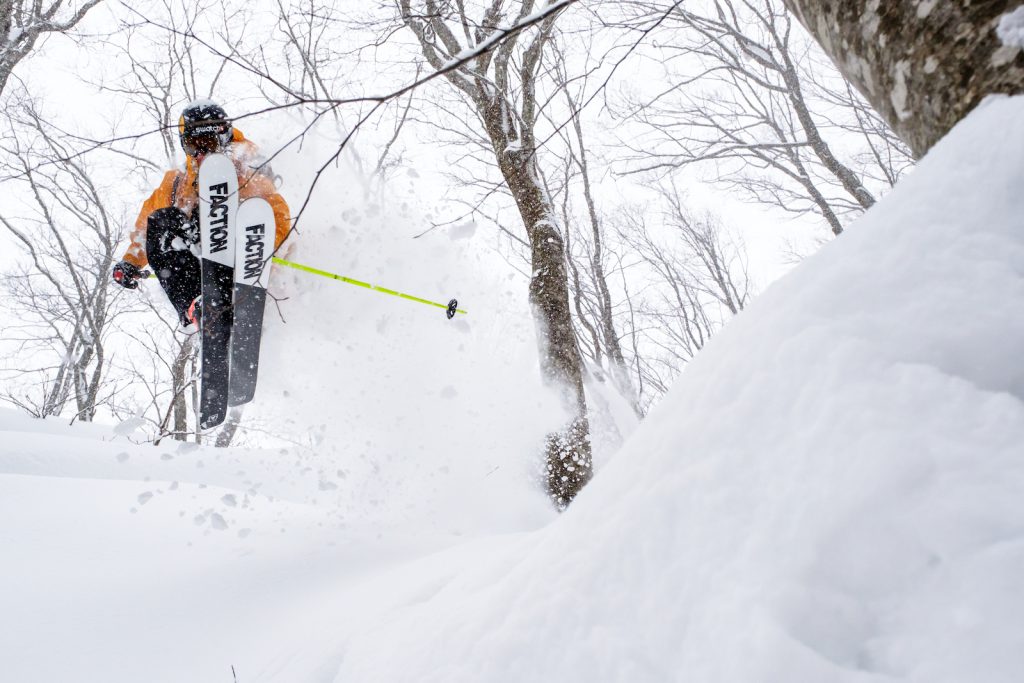 The Prime series are Faction team rider Sam Anthamatten’s pro model, and they are designed specifically to cater to his needs on the Freeride World Tour and climbing/skiing terrifying mountains all around the world at breakneck speed. At a time when many brands are on a mission to make their skis more accessible and versatile for more people in a greater range of conditions, Faction have gone out on a limb and built a ski designed to ski steep untracked powder and land cliffs as well as possible, and everything else be damned. And damn they’ve done a good job!

The 4.0 is the biggest in the series, sporting a 118mm waist, precious little sidecut, and a sublime long and low rocker profile. They’re very reminiscent of the old 4FRNT EHPs (Eric Hjorleifson’s pro model from yesteryear), but brought up to date with modern shaping refinements and a lightweight-but-damp and very stiff carbon/flax construction. 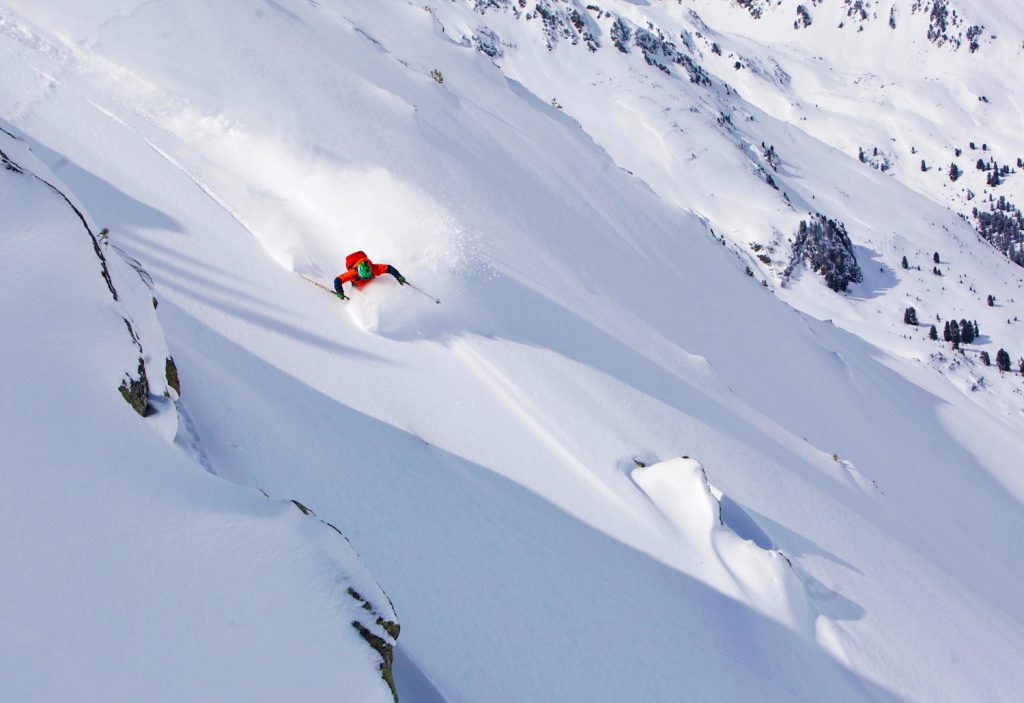 Matt tests the Faction Prime 4.0 in the Kühtai backcountry at our annual ski test

In untracked powder they are phenomenal. Like the EHPs, they’re not particularly floaty – the relatively narrow tips often track beneath the surface – but they have the most unique and addictive frictionless feel. Forget a hot knife through butter, we’re talking nuclear-powered-samurai-sword through butter.

The straight shape, both in terms of sidecut and rocker profile, means there is no wide point or hinge to cause drag. That also means they feel very neutral: point them straight down the fall line and they’ll happily sit there. Feather them across and they’ll drift forever McConkey-style for 20 second faceshots. Add some edge and you can arc huge GS turns, work them laterally and you can porpoise in and out of short turns with all the carbon-pop you want, or slash the tail out at will for yet more gratuitous faceshots. The point is, the choice is yours: they won’t help you turn, but neither will they hook you into a prescribed turn radius. And isn’t freedom what powder skiing is all about?

The shape does have some downsides. While the Primes are actually very composed on hard snow and easy to pivot in short turns, carving is not their forte and is frankly pretty uninspiring. Pistes are very much a way to get to the next stash rather than something to be enjoyed. The stiff flex can feel like a runaway train too, if you’re legs are tired or your balance is off. 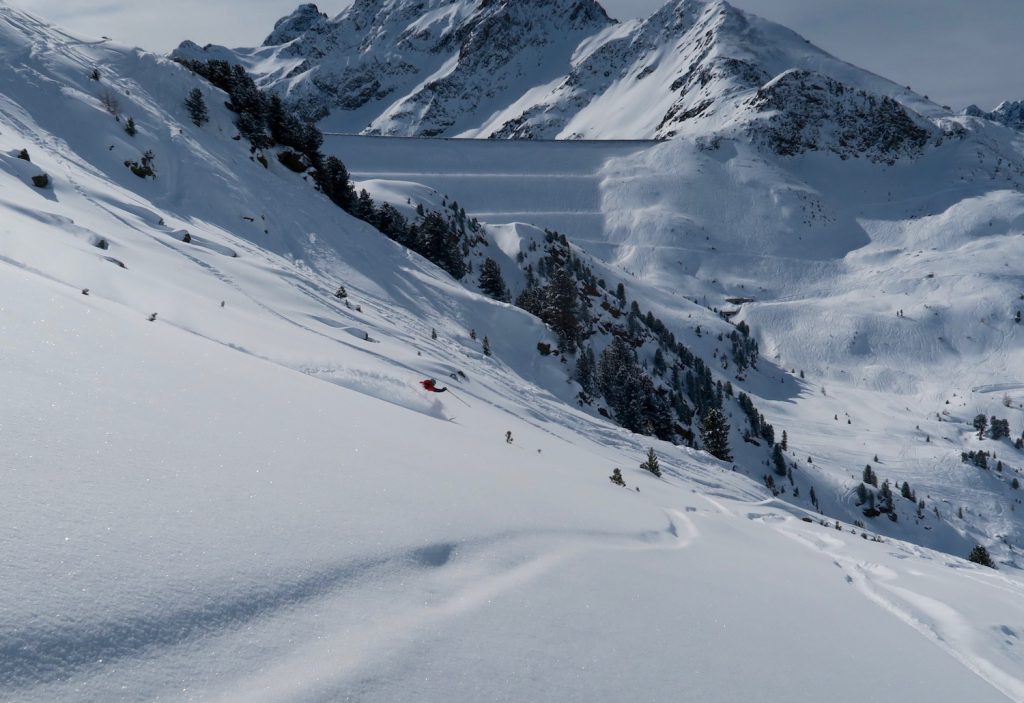 Matt liked the Prime 4.0s so much he refused to give them back and promptly disappeared for a few more powder runs!

The Primes do not try to be a one ski quiver then. They do not flatter intermediates or pander to versatility and compromise. But if you like to ski untracked snow at speed, and especially if you often find yourself working and hiking to enable that particular habit, nothing else comes close performance wise.

Absolutely brilliant. The long low rocker and flat camber plus straight shape lead to a unique and addictive frictionless in any sort of fresh snow. The flip side is that they don’t carve well at all compared to other similar size skis, but frankly, who cares?! If that’s the price, I’d pay it any day wth 10+cm fresh snow. The flax in the construction keeps the much damper than many skis if this weight, but the carbon provides sooo much life and pop. Ok on piste if you enjoy shorter old school turns, lots of fun popping around in chop and bumps, next level in untracked powder – and category defining when you get to let them run in fresh snow. 10/10

Hardly a ski touring ski, but great free ride fun. If you want a ski to gun over a col and rip up an epic descent (at speed) then this is a good bet!