You need big balls and skills with a nutcracker to get on the one lift that accesses the world’s largest off-piste playground – Craigieburn, New Zealand

I dream of returning to Craigieburn. When I lived in New Zealand (2006-7), I wintered in small-town Methven, hub of commercial ski hill, Mount Hutt. As a chalet maid and head waitress, I whirled from bed-making to fire-lighting, skiing to the bistro; repeat. So busy I was snow-blind. I didn’t discover the secret goldmine up the road until after the year’s last snowfall.

When the season wound down, I did too. One day I chanced upon an article in a café about New Zealand’s Club Ski Fields. They were relics from before skiing sold out, I read. In the ’30s, winter sports enthusiasts had gathered into tribes, pooled their skills as builders, plumbers and farmers, and hiked up mountains carrying tractor generators, timber and rope to claim ski basins and build basic ski lodges and tows.

Skiing in Scotland and elsewhere began in a similar fashion. But in New Zealand, decades later little has changed. Club Fields remain non-profit organisations, run by club members. Most are un-groomed, making it essentially lift-accessed backcountry. In the evenings you share tales of adventure with a handful of like-minded skiers in basic wooden lodges. Because they aren’t publicised, the fields aren’t widely known.

There are around 15 of these Club Ski Fields in New Zealand, and six of the best ones, known as the Selwyn Six, are in the Southern Alps, not too far from Methven. Craigieburn is the most famous, so I went, somewhat nervously: freeskier Glen Plake adored Craigieburn back in the day. When the snow is on, I’d read, it’s deep and steep, and routes range from more difficult to suicidal. That day it was end-of-season icy. 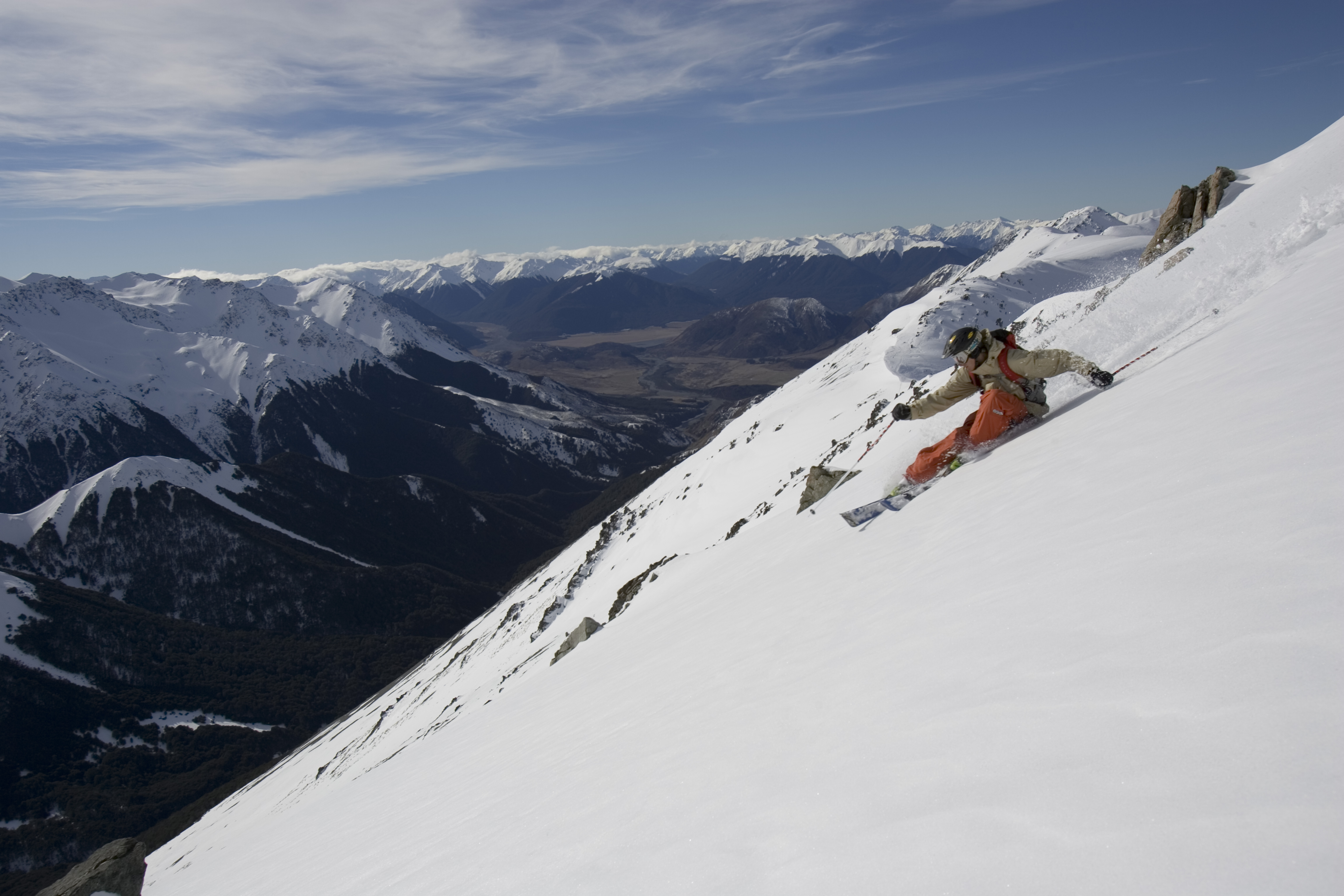 I’d hired a guide, who drove me up the rocky access road and introduced me to the nutcracker (it resembles a household one). You wear a mountaineering harness with this hardware attached by cord. I finally got the hang of flicking it over the tow rope and clinging the handles together. Then I was at the top! Of the Bottom Tow. Only two more to go, named with classic Kiwi simplicity, Middle Tow and Top Tow. My arms burnt as I juddered up.

From the top, the world lies, somewhat scarily, below you. I gazed around at the Southern Alps, and in the distance I could see the Grey Range and Mount Cook (3,754m). The easiest option from the top is to sweep in big turns right or left, down Siberia Basin or Middle Basin. The latter is the ski field’s showpiece – a wide bowl, steep enough to be fun but not scary.

Schussing further right or further left from the top accesses Craigieburn’s infamous range of steep, rocky chutes. I watched a couple of skiers drop into a suicidal gully, looking like pinballs in a machine, desperately turning before they crunched Greywacke rock, then an echo whooped up.
The Top Tow also accesses one of New Zealand’s only tree runs. You ski down to the Whakamaru Day Lodge, perched on Kea Ridge, then hike the ridge and ski down a wide avalanche path through trees.

A hike right over a ridge, or up to the summit of Hamilton’s Peak, meanwhile, grants access to the neighbouring Club Field, Broken River. Together these fields make up the world’s largest lift-serviced off-piste playground. While Craigieburn is predominantly steep and suited to advanced skiers, Broken River is more mellow.

At Broken River I chatted to some founding members, skiing with their grandchildren. They told me this used to be the women’s ski field. “Craigieburn was men only back in the day,” Margaret said. “They told us, ‘gels, get yourselves over that hill, there’s a perfectly good little basin over there you can have!”

In my dreams I head back to Craigieburn from Broken River for a last run. It’s August, mid-winter, and a south-facing gully, so there is little sun. I emerge, arms burning, at the top. Then I swoosh down Middle Basin. From here you can lean right, looking out for a small goat’s track through the beech woods, which pops you out behind the Koroheke Lodge; then it’s a short hike back to the bottom tow for another go. Here, I click off my skis and head into the cabin for a beer, nutcracker swinging.

How to go backcountry skiing on a budget