Every powder day is a good day, but the new Blizzard Spur is the sort of ski that makes the good days even better

We were fans of the old Blizzard Spur in the past, but it was always a rather ferocious animal. Big and punishingly stiff, they were a blast when conditions were perfect but felt like an aircraft carrier the rest of the time. For 17/18 the Spur comes back in an entirely new guise, and is far more versatile – yes, we’re calling a 192cm long and 124mm-waisted surfboard versatile – and a whole lot more FUN!

The new Spur hasn’t just been toned down and softened up; everything about it is new, other than the colour and the name. The most striking features are the asymmetric side cut and the radically shaped tip and tail. The rocker profile is different too: flat in the middle with generous splay at tip and tail. Liberal use of carbon means they’re a lot lighter than they look, with a soft and very poppy flex that firms up nicely underfoot due to Blizzard’s ‘dynamic release technology,’ a titanal component that runs full width underfoot but tapers off sharply towards tip and tail.

Testing the 2018 Blizzard Spur ski (in not quite enough powder)

What all this means is that despite the size, the new Spur is very user friendly and incredibly easy to throw around. Even on hard snow, it’s effortless to bend into short carve-style turns and it pivots faster than thought. Navigating pistes between stashes is a breeze, and as long as the surface is soft enough to dig an edge in it’s surprisingly fun to lay them up on edge and see how deeply you can flex them!

Clearly though, this ski is designed for powder, and that’s where it really comes alive. The asymmetry – one edge has a 26m radius and the other a 30m radius – really does make a difference: the Spurs are so loose that you can initiate turns with just a twitch of the toe in the trees, or slarve out ‘Alaska turns’ without hooking up when you get a chance on a bigger face. The flex is sublime, deep and forgiving, it lets you porpoise up above the snow before diving back down into it again, with no hint of tip dive. A side effect of that is just how well the Spur hoovers up chop too: as long as it’s still soft they roll on through everything, tips spearing through lumps without deflection. Looking down there’s definitely plenty of flapping, but none of this is transmitted to the feet. 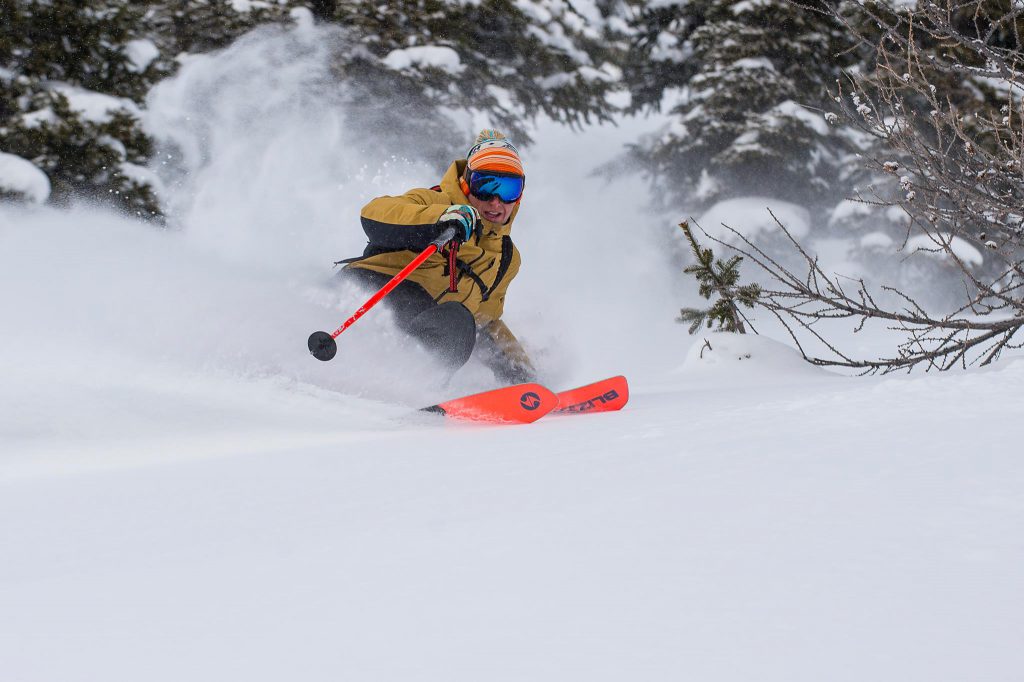 While they clearly are big skis the performance envelope is surprisingly wide. There’s no need to be scared of the length and width (or the imposing black topsheet) either, even for midgets and lightweights. In fact they’re a lot like a Labrador – non-judgemental, fun, easy-going and generally just happy to be bouncing around outside with you. In short, a ski to make the best days better.

“A bit of a departure for Blizzard – rather than being another über stable freight train the new Spur is just downright FUN! Obviously great in powder where it feels very light and nimble, but surprisingly good when it gets tracked out and choppy too. They might look serious, but they’re big softies really!”
Matt Clark