The Arctic is brutal, but beautiful. Justine Gosling reminisces about crossing Spitzbergen in Svalbard by skis, and camping overnight on the ice

It started off in a cold, dark, damp smelling garage littered with kit, chocolate bars and packets of freeze dried food. Here we were, packing for a guided 5 day coast to coast arctic ski crossing of the largest island in the Svalbard archipelago, Spitsbergen, on the 79th parallel.

From the garage we loaded up the pulks carrying all our food and gear onto the sledges. These were then towed out with us on a 4 hour journey via snow mobiles to our start position on the west coast ice edge.

On our first day we skied for 3 hours into the wind to get off the coastal ice and up onto the safer glacier. Because we were camped so closed to ice edge our chances of an encounter with a Polar bear were high, so we took turns throughout the night to keep Polar bear watch, in between sleeping snugly in our 3 inch thick sleeping bags. 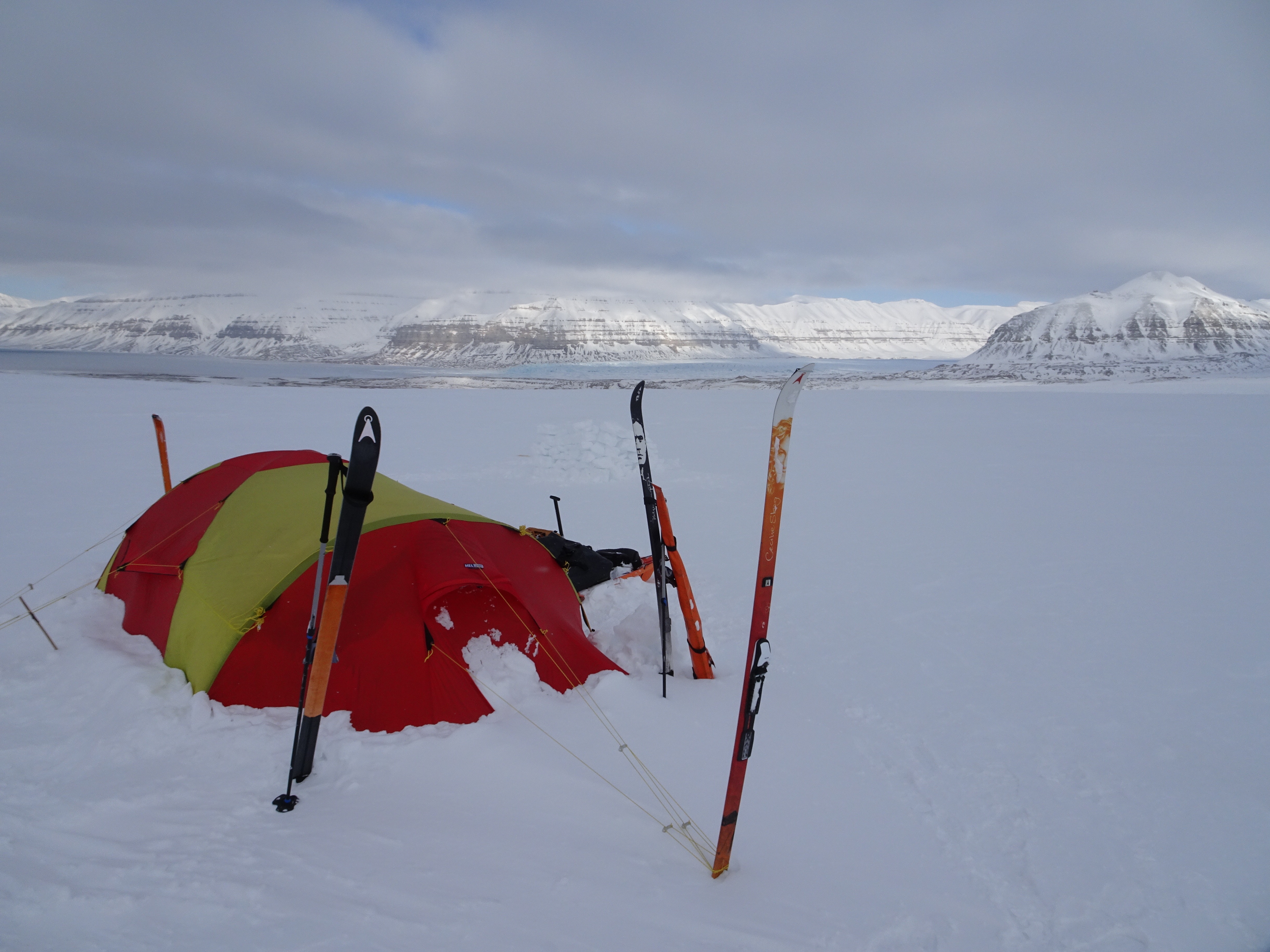 The 24 hour daylight was an aid to us: we weren’t limited by daylight, and the sun raised the air temperature. It played havoc with my sleep however. Daylight is energising, and even though I was exhausted from skiing and the journey out, I could not get to sleep – even with an eye mask on. It also affected my dreams. I had one crazy dream of spoon feeding my rehydrated chicken curry meal to a friendly polar bear. That doesn’t even happen in cartoons!

The next morning I woke up to a whole new world. The steep, pointed mountains on either side channelled our route. We could finally see the baby blue craggy glacier to our left, which had been hidden by clouds yesterday. The sun shone and made the snow on the ground glisten like a sea of diamonds. Now we felt the vastness of our snow covered surroundings and were humbled by our smallness in such an almighty scene of white beauty. As I stepped outside the tent, what first struck me was the silence. It amplified our sense of being so alone, so far away from civilisation, so out of our usual comfort zones and in such a unique place that we were privileged to have all to ourselves.

It took about an hour each day to de-camp, and a couple of hours upon waking to boil enough snow to fulfil our water needs for the day. We’d then set off, covering 20-25km per day, stopping for lunch and setting up a new camp again at the end of the day and boiling more snow for our meals and drinks. We ate rehydrated meals. Whether they were meant to be curry or pasta, they were all the same colour orange and tasted much the same, but were at least filling and warm.

Going to the toilet was something us girls dreaded but couldn’t avoid. It was a very brief process that I generally put off for a couple of hours until I was desperate. The “procedure” was so much worse in the wind and the direction was of huge importance to prevent “accidents”. It was better in camp: we’d dig a hole shielded by a wall made of snow blocks to protect us from the wind, and give us a little privacy. The loo always had a magnificent view.

We skied mostly in silence. Silence, due to the face burning winds that paralysed facial muscles, but also because I was totally consumed by the awesome beauty of my surroundings – beauty that I couldn’t articulate in words. We travelled at a slow place. The legendary Norwegian polar explorer Roald Amundsen famously stated “At the poles, if you sweat you die.” Sweating is a really bad idea as the dampness causes your body to cool down very quickly. Therefore we took it slow and steady, stopping for a 10 minute break every couple of hours to hydrate and refuel with a snack. The route took us up and down 2 glaciers. The downhill sections were the most fun – the easiest way to go down was to simply straddle our pulks and ride them like a child would a sledge, all the way to the bottom! 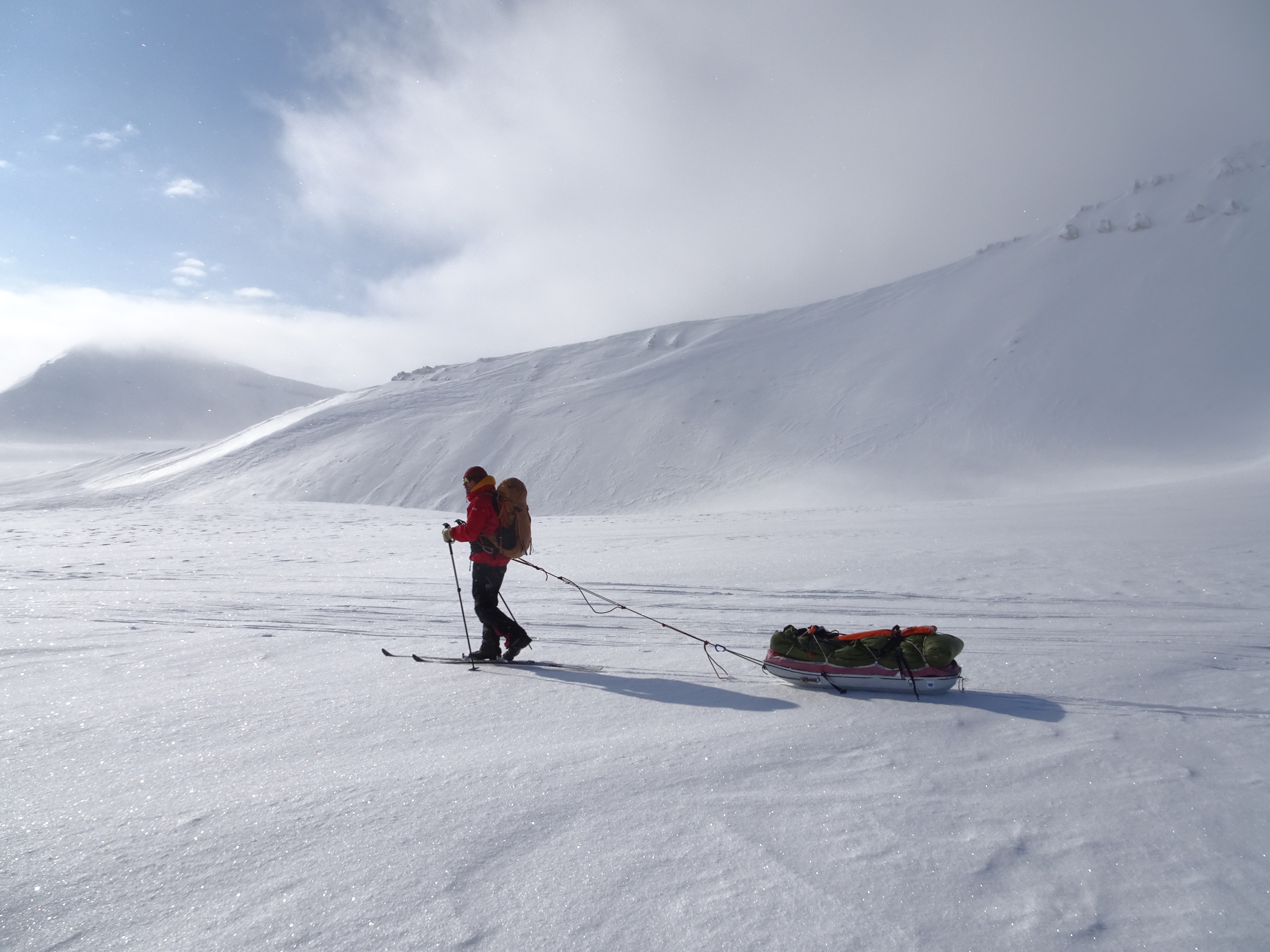 Towing the puck can be hard work | Photo: Justine Gosling

At home in the UK we’d never dream of eating outside in temperatures less than 25 degrees under a perfect blue sky. On Spitzbergen, we’d dig a communal table out of the snow each evening and enjoy a sociable dinner of freeze dried meals and mugs of hot chocolate in temperatures of munis 15!

Despite being surrounded by snow and ice in the arctic, the air is very dry and it is classed as a desert. When it snows, the snowflakes are huge, and dance as they fall out of the sky, lighter than feathers. When they land they are perfect crystals with multiple defined jagged lines bolting out from the centre, shaped like crazed stars. So thin and fragile they melt instantly – blink and you miss the magic. I was mesmerised watching the delicate flakes land on my arm and disappear just as quickly.

On last day of our crossing we planned to descend two joined glaciers down to the sea ice and our snow mobile pick up. However, the two glaciers – which were still joined as little as two years ago – were now separated by a massive steep crevasse, stopping us in our tracks. We had to remove our skis and trek for a couple of hours until we could find a safe crossing point to continue our journey. Overcoming this serious navigational and safety issue felt like a real adventure!

The view from camp over the sea ice on our last night was particularly spectacular. The wind was gone, the blue of the glacier cut the through the white of the frozen flat sea, and the sharp tipped snow covered mountains above. At 2am on my shift of polar bear watch I had this wondrous view all to my self. I felt like no one had ever been here before, that I was the first to see this humbling view. In this huge expanse of space I felt the greatest sense of freedom that I’ve ever known. 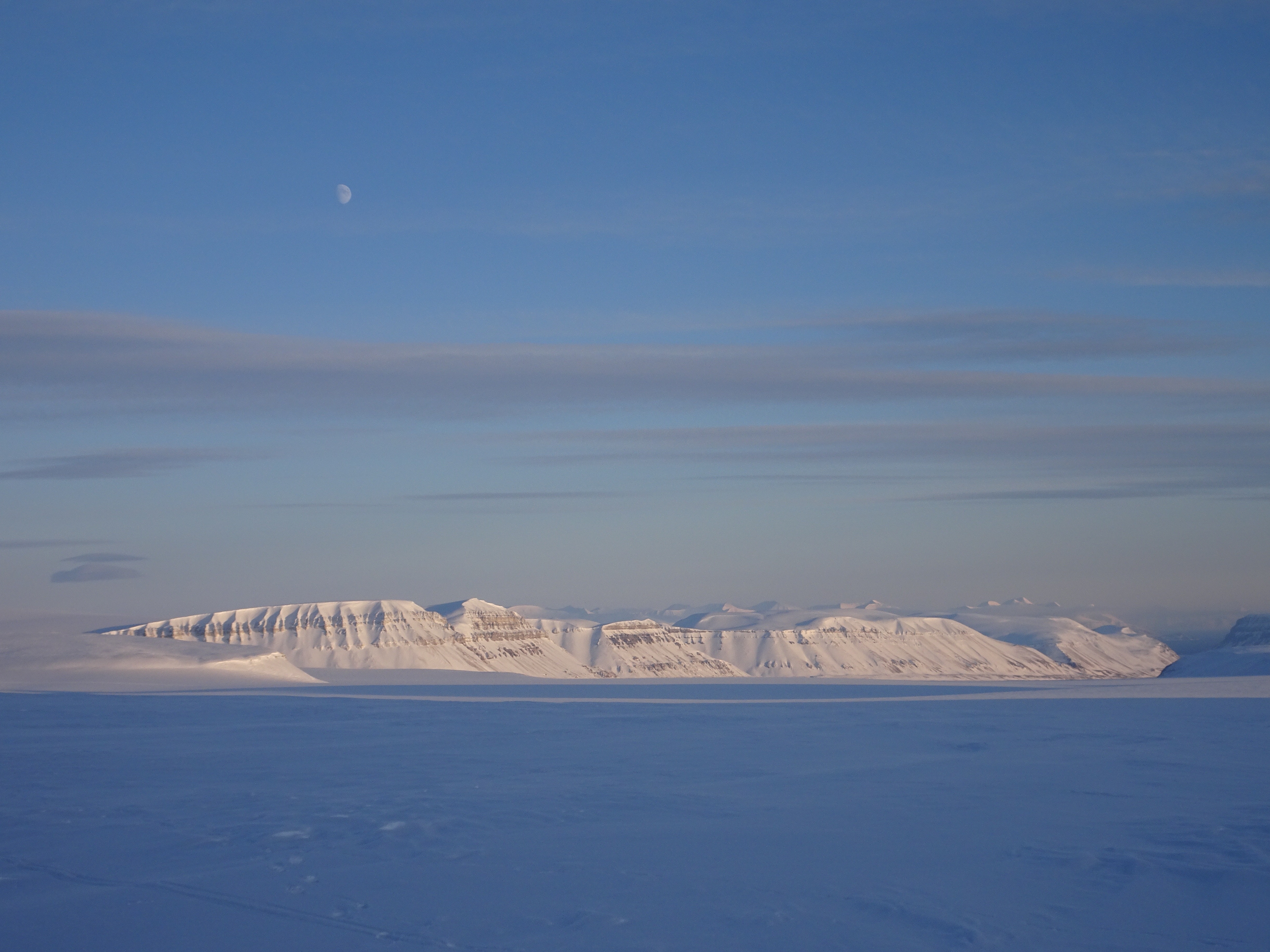 Mind-blowing views over the sea of ice | Photo: Justine Gosling

5 days wasn’t enough. On our return to civilisation I stood under the hot shower for over half an hour. Before I did I took a long look in the mirror. I’d not seen my face for 5 days. My cheeks were wind burnt tomato red, my lips were cracked, and skin was already starting to peel off. But I was smiling back at myself and had a sparkle in my eyes. Adventure isn’t always glamorous or  pretty, but I felt a huge sense of satisfaction at not only having survived out in the snowy wilderness in temperatures of -20°C, but having thrived, laughed a lot, and felt a deep sense of contentment. Living so basically had stripped away the complications of life and really freed space in my mind.

It’s such a heathy process to go through, and for just a weekend, it felt as though I’d been in a completely different world. And in a way, I had been – the magical frozen kingdom of the polar bear. What a privilege.

Words and photos by Justine Gosling, with thanks to Hurtigruten Svalbard. See more from Justine on Instagram.