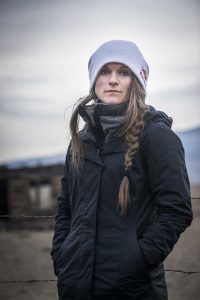 Buckle up, as one of the few females to go toe-to-toe with the guys in huge ski movies, and possibly the fastest talker on earth, tells Jonny Richards about gruesome knee rehabs, parking snowmobiles in crevasses and locating your Alaskan Zen

Jonny Richards: Great to catch up. Days of My Youth is your what, 10th ski movie, something like that?

JR: Skiing is normally such a low-key activity. Is it weird to have premieres, people screaming your name, Michelle Parker autograph sessions…?

MP: Yeah, that actually took a while. But I’ve been a pro skier for 11 years now and I slowly got comfortable with it. We’re all the same and human, right? It’s such an opposite to what we do in the winter with so little contact. But now if we have a signing session, I’m energised and it’s… ON!

JR: Who were, or are, the skiers that inspired you?

MP: Eric Pollard has been the person in my mind from day one. His style, his art, his attitude is special. Chris Benchetler is in the same category. I just love the way he skis. Shane [McConkey] was always number one, watching him in Squaw when I was growing up there, racing round after him. Ingrid [Backstrom] showed it was possible to do it in films with MSP [Matchstick] and be a girl too. So she was key in my development.

JR: There are suddenly a lot of all-female ski movies. Is it necessary? You’ve managed fine in the usual male-dominated set-up.

MP: Yes. People are stoked to see women rip. And obviously it gives more female skiers a chance to be seen and get sponsored. Lynsey Dyer’s Pretty Faces sold out in Boulder and was the first ski movie to do that this year, I’m told.

JR: Your account of anterior cruciate ligament (ACL) rehab is disturbing. Physio’s assistant holding you down as they moved the knee through 90°, you in tears, yelling… Did you ever think you’d not come back?

MP: When I first did my ACL at 18 that was fine. I came back stronger. Realised I had to work super hard afterwards rather than just rely on being young and bendy. So it sort of helped me get professional.

Second time in 2009 was a big one. At Retallack, I landed on a rock (coming off a cliff), kneecap rolled on the backside of my leg, severe cartilage damage, meniscus tear, waiting hours for the heli as the weather was bad, two surgeries. That was a mental battle as no one had really done all that and come back super strong.

I think my doctor at the time was thinking I’d not be the same skier again. They had to break the scar tissue manually, and I had a lot! It was so bad I had no control over what I was saying, I was spasming, they had to hold me down. I was out for over a year, lost all my sponsors and really did think: do I quit?

I was so happy when I won best female at iF3 (in 2012), and got Red Bull supporting me. I suppose I’m the poster child for losing it all and coming back stronger. You just have to stay positive.

JR: Even when you park a snowmobile down a backcountry crevasse?

MP: (Long laugh.) That was not actually too bad. We were charging down the blind face of a glacier at Whistler, and were suddenly in it. It was an easy exit, as the crevasse was bridged, but it was a big reality check. We got my sled lashed and out but that could have been a big problem.

JR: It’s been a tough time for skiing with JP [Auclair] and Andreas [Fransson] dying. Does it affect you when a fellow top-level skier is killed? Or do you not think about the risks?

MP: If you did not think about the risks you’d be numb. I was close to JP and these things are all too common. You try and manage it and be smart. But people do die. He was so smart and calculated. He was all about safe. He’s the one that got me to sign up for Guide School in Haines. Where they teach you the risks, get your medical knowledge right. And he was there for the second time when I went…

I’ll never stop skiing, I’m too passionate about it, but all the time you can get injured or there can be life-threatening consequences. The best way is to maintain your confidence, be as safe as possible, and always be learning. Be aware in the mountains, have humility not arrogance.

JR: When you are in these high-risk situations, like standing above a huge Alaskan spine, what goes through your mind at that moment?

MP: I take a lot of deep breaths, my heart is racing probably right up to the moment I drop after giving the count. The second I go, I’m 100% focused. I’m in the moment. No outside thoughts. To be totally there.

I see it as active meditation. I seek out that feeling and try and practise it whether I’m biking, running or doing yoga. It’s empowering and everyone will have felt it when you’re 100% in control. I’m on it, I’m confident and I don’t let the fear get to me.

Don’t hesitate, speed is usually your friend, and stick to the game plan.

JR: What is the plan? Do you take things season by season? Or just think, I’ve got another four years or whatever, this is what I want to achieve before my knees give out?

MP: I don’t put a cap on it. I want to exit on my own terms. I don’t want to have to go out because of injury. I’m still inspired and I have the passion to keep delivering.

JR: Over all the years what has been you favourite trip?

MP: Probably because it’s so recent, Svalbard, north of the Arctic Circle above Norway. We were filming Faces Of Dav [Chris Davenport’s latest Red Bull project] with Ingrid [Backstrom] and James Heim.

We took a sailboat 14 hours to location. Absolutely no one there. Hiking all the lines. We were so far away from civilisation that the average person would be scared just to be there, never mind the skiing and couloirs.

It was light 24 hours a day. And sunny most of the time. We were skiing sometimes between midnight and 3am, laughing that we really could ski all day… that was unique.

JR: I’m worried that you really could ski all day. I’ve never known anyone talk so fast and be so enthusiastic about the sport. Do you ever stop?!

MP: This time of year is full-on. I’ve had two months’ coaching and guiding in South America, then a three-week trip – but I can’t disclose where! That was for a Red Bull project you can’t know about yet. Then we were out with Days of My Youth going, going, going! But I love to be doing. I don’t like to be bored. There’s never a moment as a pro skier when you have nothing to do.

Taken from issue 129 of Fall-Line