What an extraordinary day it’s been for Team GB: not only did Izzy Atkin win our first ever Winter Olympics skiing medal but, together with Lizzy Yarnold and Laura Deas, their combined three-medal haul is the largest ever claimed in one day by a British Winter Olympic team. Add that to Dom Parsons’ bronze medal from yesterday’s Men’s Skeleton Final and Team GB is on track to supersede the four-medal haul that no British Winter Olympics squad has been able to improve on since the 1924 Games.

Izzy Atkin started the day in style, becoming the first British freestyle skier to take an Olympic podium. In a true nail-biter, and in a field of seriously experienced competitors, the 19-year-old was placed 20th after the first qualifying run; rose into fourth on her second run to finish inside the top 12; moved into fourth on the first (of three) final run and then into third on the second run. However, X-Games winner Maggie Voisin (USA) leapfrogged her on the final run, meaning Izzy had to seriously up the ante to keep a medal. With fantastic calm, she knuckled down and delivered the goods, delivering a storming run that put her back into bronze medal position. Her teammate Katie Summerhayes also performed well, finishing seventh in the final. 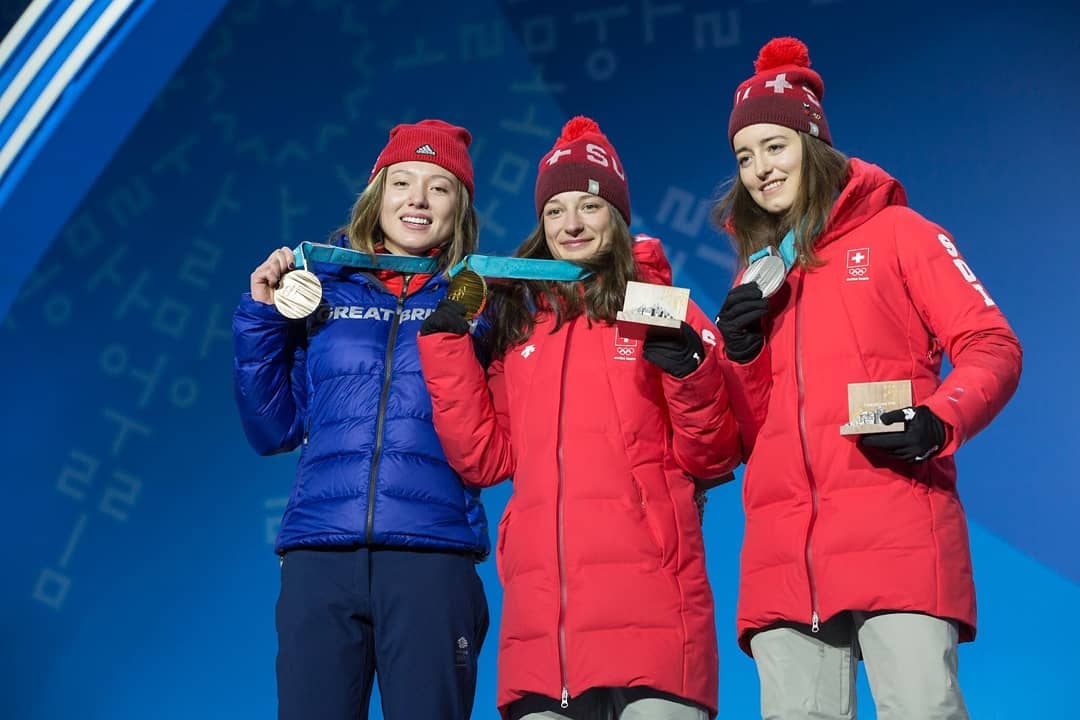 Here’s to hoping that the men’s freestyle skiers, James “Woodsy” Woods and Tyler Harding, will take inspiration from the women’s performances when they step onto the snow for tomorrow morning’s Slopestyle final.

The Women’s Skeleton Final was no less thrilling to watch, with Lizzy Yarnold and Laura Deas finishing the third heat in second and fourth respectively before both putting in fantastic final runs to finish with gold and bronze.

Heartbreakingly, we saw Elise Christie’s Olympic Short-Track Speed Skating hopes thwarted yet again. After crashing out or being disqualified from three speed-skating disciplines at Sochi, the plucky 27-year-old was hoping for better at these Games. However, after sailing through the qualifying rounds for the 500m event on Tuesday, she crashed out there and, this morning, the same happened to the triple world champion in the 1,500m semi-finals. Clattering into the crash boards at serious pace, she was taken to hospital after the crash – thankfully no bones broken.

I’m heartbroken with the result, but I also know what happened wasn’t in my control! I worked so hard for the 500, but this time round it wasn’t meant to be, 4 years to prepare to be a 500 Olympic champion, but for now onwards and upwards to the next event. Congrats to @aryfonta90 long time coming 🙌🏻🙌🏻 and my good friend @yaravkerkhof! And the come back queen @kim.boutin. Thanks for all the support and love 💜 @cpgilmartin my sister 😁 @shaolinliu the rock #pyeongchang2018 #teamgb #winterolympics #shorttrack #gbshorttrack #olympics #pyeongchang

Having made a remarkable recovery from a severe head injury last August, Lloyd Wallace put on a strong Olympic debut at the Men’s Aerials qualifiers but didn’t make it through. Aged just 22, we’re sure he’ll be back for a bigger bite of the action at the next Games.

After such an epic day today, we’re hoping that Woodsy and Tyler will keep up the pace and deliver some more medals. The heats kick off at 01.15 GMT and the final at 04.15 GMT, which could lead to some remote control arguments, as the first run of the Men’s Giant Slalom also kicks off at 01.15 GMT as well (with the final starting at 04.45 GMT). We’re hoping it might as exciting to watch as this morning’s Women’s Super-G, when the 22-year-old snowboarding world champion Ester Ledecka of the Czech Republic incredibly stole the gold medal away from Anna Veith (who had already given her celebratory press interviews), racing on skis she’d borrowed from  Mikaela Shiffrin. The first athlete to compete in both skiing and snowboarding at the Winter Olympics, she’s the hot favourite to win the Women’s Snowboard Parallel Giant Slalom on Thursday. We’ll most definitely be watching that one!