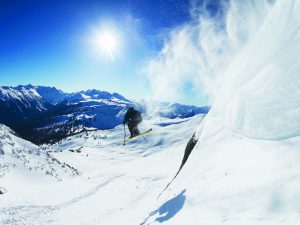 That’s right folks. We’ve teamed up with the delightful (and we’re not just saying that because they gave us a competition) people at Crystal to send two of you lot on a week’s holiday to Canada’s best-known resort.

Possibly our best prize yet. Why? Um, because it’s Whistler Blackcomb. The biggest, boldest ski resort in North America. In its boundaries there’s just shy of 8000 skiable acres and 1600m of vertical descent.

And it’s good skiing too. Seriously good. Tantalising double black diamonds abound, including the no-fall zones of West Cirque and the jump-turn-only chutes off Spanky’s Ladder. That’s why pros flock here: there are hike-free lines everywhere you look.

But for us mere mortals who need a warm-up first, a large chunk of the resort is cruising paradise with a healthy mix of gladed blues and open bowls. The six parks – including Blackcomb’s oft-filmed Nintendo Terrain Park – make Whistler Blackcomb as well-rounded as it is big.
Yes, it’s safe to say there’s enough here to keep you going season after season, but if you find yourself with extra energy to burn after a day’s skiing, the off-snow action is good too with a bobsleigh run, Canada’s longest zip line and spas aplenty. In addition, Vancouver, with its mishmash of urban skylines, mountains and sea, is only a two-hour drive away.

There will not be much scope for lie-ins – Whistler Blackcomb averages 39ft of snow a season – but we’ve still scored you a top-notch hotel: the 4.5-star Fairmont Chateau. It’s in a ski-in/out location right at the bottom of Blackcomb mountain and is a five-minute walk from the town centre. Stock up on breakfast (we hear the omelettes are unbeatable) before you sneak the first tracks of the day.

The prize also includes two return economy flights from London to Vancouver with Air Canada – and transfers to the resort.

This competition is now closed