To have flexibility, agility, coordination, power, endurance and strength seems a big ask. But that is exactly what skiers need, even on an outing to the local snowdome…

I was at the UK Snowports Coaching Conference at the Chill Factore testing some skis when I came across a snowboarder who’d obviously eaten too many pies. He was slumped against the wall, bright red and sweating profusely. Worried that he might be having a heart attack I asked him if he was OK. He assured me he was, if not a bit tired. Here was a guy that was obviously not prepared for snowboarding, especially if he was worn out from riding a 180m-long blue run.

It was ironic that early that morning the Alpine Director of the Norwegian Ski Association, Claus Ryste, had presented on some of the reasons Norwegian skiing was so successful for such a small country. Top of the list was fitness, and indeed, many Norwegian skiers are beasts; but it turns out it’s not only Norwegian skiers who have superhuman-level endurance. Claus flashed up a chart showing the winners of the global television show Superstars and many of them were alpine skiers, including Britain’s own Alain Baxter. These were supreme sportsmen who were fantastic all-rounders: ‘Jack of all trades, master of none’ as Claus described them.

But why is that and how does it affect me, you might ask? Well, flicking through the holiday ski magazines there are plenty of suggestions to get ski fit, but when building a fitness regime you have to look at the science behind the activities that the athlete will perform. To be an elite alpine skier, analysis indicates you have to have flexibility, agility, coordination, anaerobic power, anaerobic endurance, aerobic endurance and muscular strength – see, Jack of all trades. 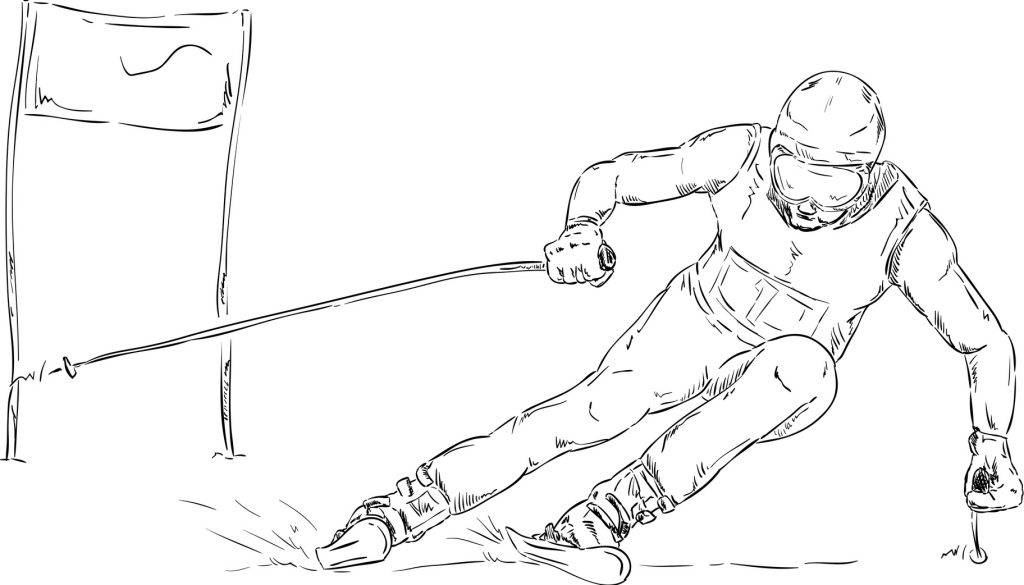 Unsurprisingly, elite skiers have extremely strong legs, “like hams” to paraphrase a female friend of mine as she lusted after some Italian racers. They have strength, especially when holding a fixed position (such as in a tuck or long traverse) and also in isokinetic work involving knee extension (such as when turning).

Nothing surprising there, but it’s nice the science backs it up. Agility makes sense; so does coordination – got to time that pole plant properly and make sure you miss that tree. Flexibility? This is neglected by a lot of skiers, but you need to be able to separate upper and lower body, rotate the leg from the hip joint and create dynamic angulation – or breaking at the hip as some people call it. I’m wary of stating that last one, as I know there is a potential for a billion letters to arrive at Fall-Line Towers discussing angulation from anyone who has read a book on skiing…

I’m currently training a guy called Vince, who has no flexibility on his right side; we’ve spent months working on his technique with no effect until, light-bulb moment – duh, it’s not his technique that’s the problem, he just can’t bend. Solution? Increase his flexibility with yoga (which Vince’s wife is very excited about, as it’s a recreational activity that doesn’t necessarily involve a near-death experience, which is what Vince likes).

Peak lactate levels for an elite alpine racer are typical for an athlete exercising all-out for 60 seconds or so, pushing deep into anaerobic exercise. Other studies have shown that novice skiers tend to work even more anaerobically than elite skiers, using measurements of another indicator, glycogen. This is most likely down to skill.

So, turning yourself into a better skier helps you ski more efficiently. Of course, as a more skilled skier you tend to go faster and harder and hence you are dealing with a lot more forces, so the exercise goes back up!

An elite alpine skier’s fitness requirements will be a little different from a backcountry skier who might spend the majority of their time slowly skinning up a mountain for one or two lines; I suspect the backcountry skier will have a higher aerobic element. Take the skinning element out and use the lifts, then you’ll be able to ski a lot more lines in any one day and hence the anaerobic element will become more important, as every line becomes a high speed slash and burn with rest-time on the lifts in-between.

After all that you are probably expecting me to recommend an exercise programme covering flexibility, agility, coordination, anaerobic power, anaerobic endurance, aerobic endurance and muscular strength. Sorry, I can’t; I’m not a fitness coach. But if you do ask an expert, or simply whip up a programme yourself, set up a routine of exercises, whether on or off the hill, that will look at all of these different elements to better prepare you for those big – or little – ski days. FL