Is the new Alpha SK the simplest ski touring pack ever? Arc’s latest introduction to its ski range has been adapted from a popular climbing pack

Words by Will Robson

For 2018/19 Arc’teryx has answered those customers using Alpha FL climbing packs for touring, by coming up with one purpose-built to carry skis. This no-frills 32-litre pack, weighing 990g, is aimed at hard-core tourers and freeriders.

Made of light but tough N400r-AC² rip-stop material, it has minimalist shoulder and hip belt straps. There’s an outer safety gear compartment secured by two ‘C’-shaped metal buckled straps; a main compartment with cinched top and side-zip entrance; a small zipped stash pocket on top; and five polyurethane straps to slide through anchor loops embedded in the pack for when you need to carry skis in an A-frame or diagonally.

With no compression or permanent ski-carry straps, the pack is unlike any touring pack we’ve seen. The simplicity of design keeps weight down and gives an understated look that offers versatility of use too. The removable strap system works well and although they, and the anchor point loops, look made to Arc’teryx’s exacting standards, only long-term testing will prove robustness.

The waterproof side zip is an excellent way to access the main compartment, especially as the safety gear outer pocket straps on the top need to be pulled down tight to minimise snow ingress and to keep the whole pack as close to the back as possible. Arc’teryx has used clever design and materials to re-boot the ‘simple is best’ touring packs of old. 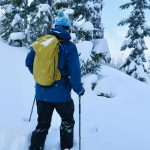 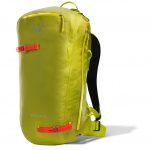 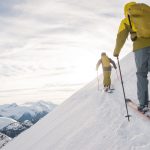