“Two-and-a-half hours up, eight minutes down!” The climbing-to-descent ratio a friend mentioned to me for a line he skied recently. Do they sounds like good odds to you? On the face of it, that appears to be a whole lot of work for little reward.

But a plain ‘minutes up’ versus ‘minutes down’ judgement of those numbers would be to miss something else: the value of those minutes. Sure, a chairlift gives you about a 1:1 up:down ratio, but is that a better day’s skiing? I know what any backcountry skier will tell you. These are people who spend more time skinning up than they do skiing down because of the joy it brings them.

Here, skiing, once again, plays the role of a metaphor-for-life. Life is richer with challenge. It just is. Things can be too easy. This doesn’t mean that, having taken a lift up, you can’t challenge yourself on the descent – of course you can!

Keeping up with a faster friend, ripping a mogul line better than last year… you name it. But there is something about hiking up a mountain for your turns – the mental and physical persistence required, the sense of satisfaction (relief) at reaching the top – that you just don’t get riding a lift. 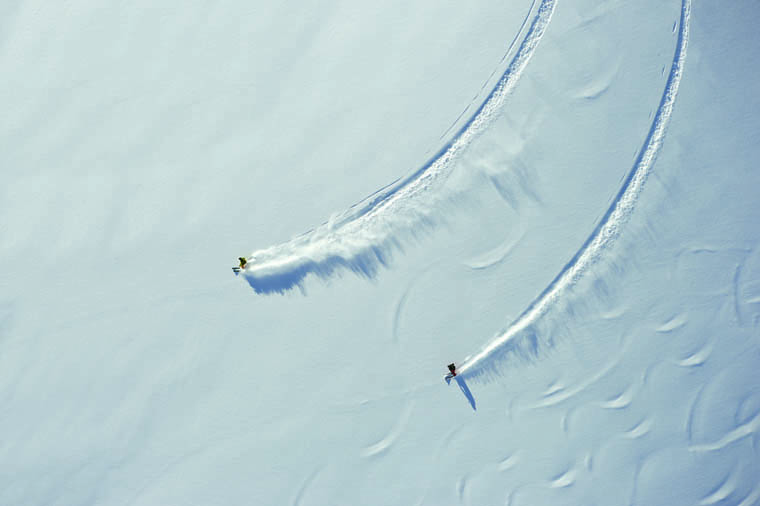 Here’s is one backcountry challenge to intimidate or inspire you, depending on your aspirations… For British Mountain Guide Tania Noakes, what began as an idea, a fantasy, years ago, ended up being a very real 82-day journey across the Alps which she completed earlier this year. Tania skied 1075km over 470 hours, climbed and skinned a colossal 74,970m – read about her journey on p66.

74,970m is barmy, there’s no denying it – but there are plenty of other more bite-sized backcountry challenges in this issue which I hope get your proverbial juices flowing (including taking your first step into the touring realm). Just bear in mind that not all backcountry runs are worth hiking for though…

There is a quick tour out here in Avoriaz which I am not in a rush to do again. It is a 45-minute hike for an eight-minute descent. But it’s not the numbers that put me off. It’s the fact that those particular eight minutes are not my favourite.

Perhaps some great company, or epic snow, or seeing a frolicking chamois or a rip-snorting sunset could brighten up this particular run but, for the moment, I’m searching for others. Maybe I just need a longer ascent to make it worth it!

Taken from issue 139 of Fall-Line, our backcountry issue, out now