Callum Jelley travels to the north of Iceland for a weekend of ski touring and slopestyle. Well, if the weather will let him, that is…

London lies on the 51st parallel, Akureyri, Iceland’s second largest city is on the 65th.  And getting there is no easy feat.

After an eight hour delay in England due to a monster of a storm rolling quickly over southern Iceland that kept planes firmly on the ground, we are finally flying. The casually sing-song accent of the pilot informs us we will be landing in Reyjakvik with only 40 knot cross winds. 40 knots!  That’s almost 50 mile per hour cross winds — easily enough to make your garden variety easyJet pilot pull the shoot,  but Iceland Air pilots are cut from a different cloth. 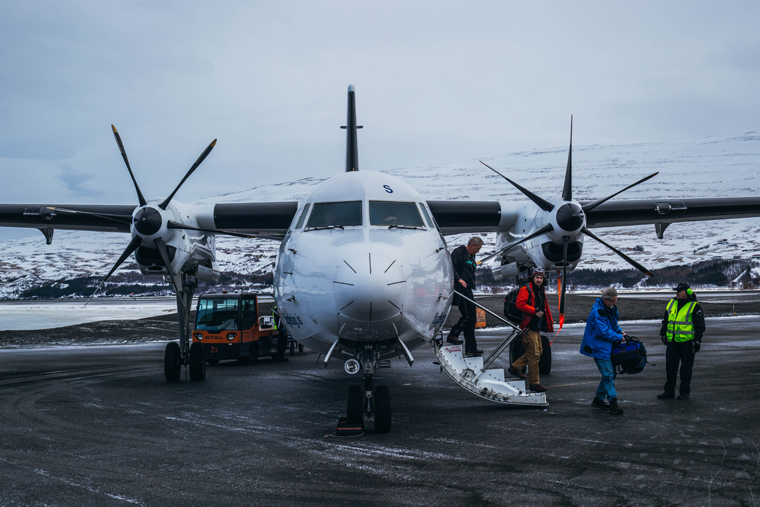 Touching down in Iceland

Coming in hot with a wildly and bumpy in run — I’d liken it to straight-lining a mogul field –our fine pilot lands the plane with little more than a sound.  I clap, like the Italians do when a RyanAir flight lands on a sunny, windless day, in Milan.

The storm clears and for the first time in the flight I see past the planes engine.  Iceland, living up to its name, is stretched out below: a white world graced in a moment of beautiful light.

Another flight takes us north from Reyjavik to Akureyri, to check out the Iceland Winter Games and, if we are lucky, to get some ski touring in. Another storm has just blown across the entire country, it’s been a bad winter, “there’s been a storm every 3 days” our driver tells us as he speeds away from the small but perfectly formed Akureyri airport. 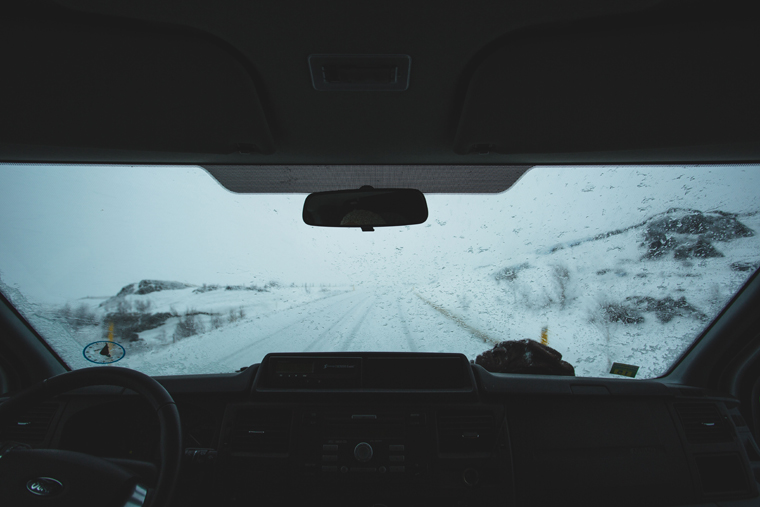 Backseat driving with the fastest driver in Iceland

Sat gripped in the back seat is Nate Abbott, former editor of Colorado-based Freeskier Magazine, and now their staff photographer. He’s one month post ACL surgery and has a large black knee brace over his black jeans.

To distract ourselves from our driver’s attempts to overtake every single car in Iceland while texting and dodging icy patches, we discuss living in Europe vs Stateside, football/soccer, scotch, the cost of beer and Peter Andre. 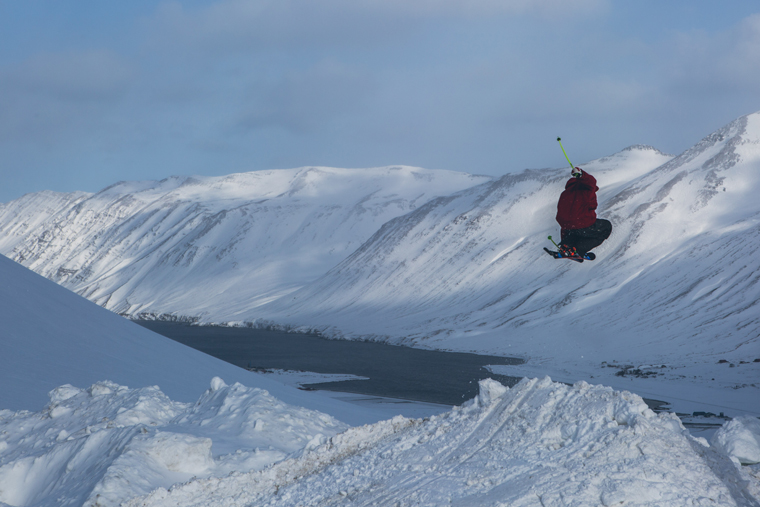 Deposited like a parcel in a small, red cafe in the even smaller fishing village of Siglufjörður we await the arrival of our group, a bus load of Iceland Winter Games competitors, members of parliament, dignitaries and tour operators, all on a jolly-day-out exploring the five ski areas of Northern Iceland.

Jumping aboard the party bus we are immediately given a cold beer and are whisked off to Siglufjörður ski area to have a quick taste of Icelandic two-plankin’. I chuck my boots on over my jeans and run after young American slopestyle stars Robbie Franco and Noah Wallace. 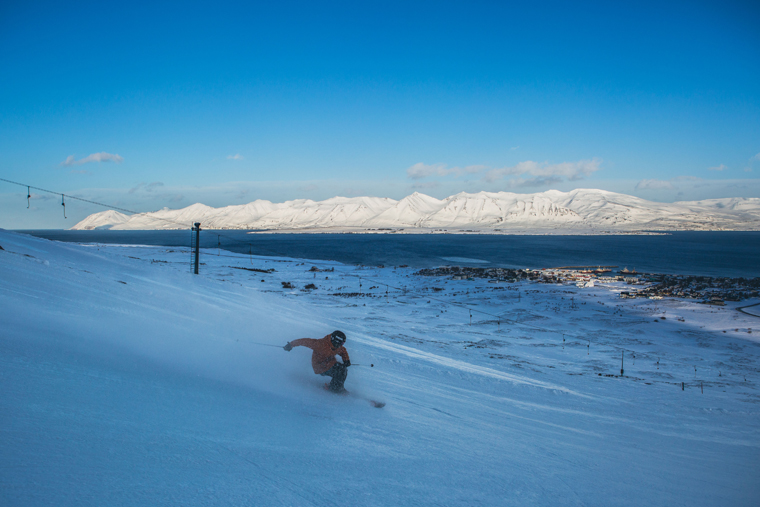 Noah Wallace sharpening his edges on the ice

After a quick lap and eye up of all the backcountry possibilities, of which there are many, we are back at the bus ready for the next stop, waiting for the bus driver to turn around. Before anyone knows it, Noah and Robbie let their jibbing minds run wild and they are flipping out the parking lot, above the fjord that stretched into the distance, before disappearing down the road.

We pick up the hitch-hiking stuntmen on our way back to Akureyri, stopping at a couple more resorts and a local brewery en route. Back at base Noah, Robbie and I slide away from the group to check out the Iceland Winter Games course. This year it features a rail section leading into three jumps ranging from 20 to 80ft; it’s impressive and the boys are excited by the prospect of trying it out at tomorrow’s comp. 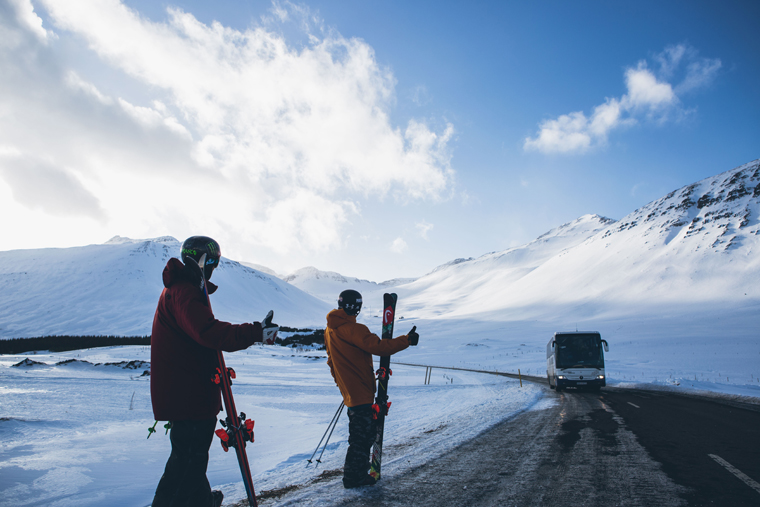 Noah and Robbie, getting hitched

Held at the Hlíðarfjall in Akureyri, the Iceland Winter Games feature a ski and snowboard slopestyle competition and, now in its second year, is attracting big-named riders from around the world. They aim to build it into a “small event with a big following”, Set in an incredible environment, with easy access from both the states and Europe, the Iceland Winter Games are poised to become a mainstay of the AFP circuit.

Morning breaks in streaming golden light, igniting the mountains across the fjord, plumes of snow blowing from the peaks. Sunny but windy, the competitors are going to have their work cut out. 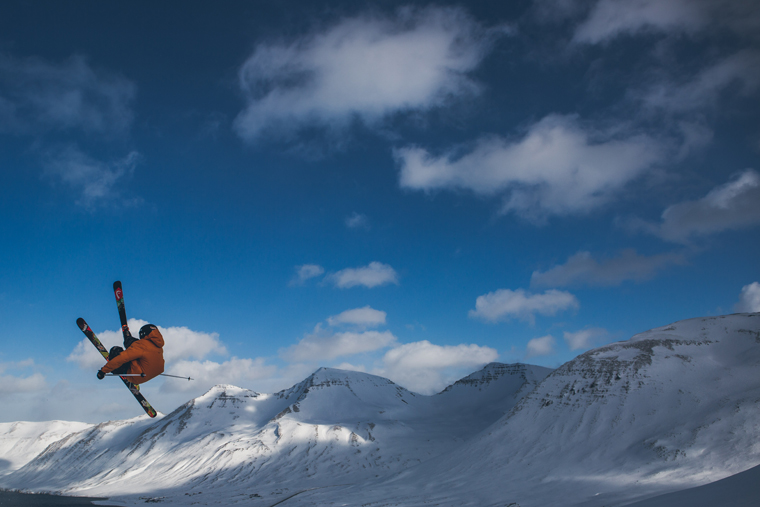 Time for practice and the sun is still shining, but the wind is gusting at over 30 knots and the competitors can’t make it past the 2nd jump — that much cross wind on an 80ft jump and they would likely get blown all the way into the fjord. Still, Norwegians Siver Voll and Klaus Finne along with  Robbie and Noah do their best to put on a show for the crowd, and our cameras. 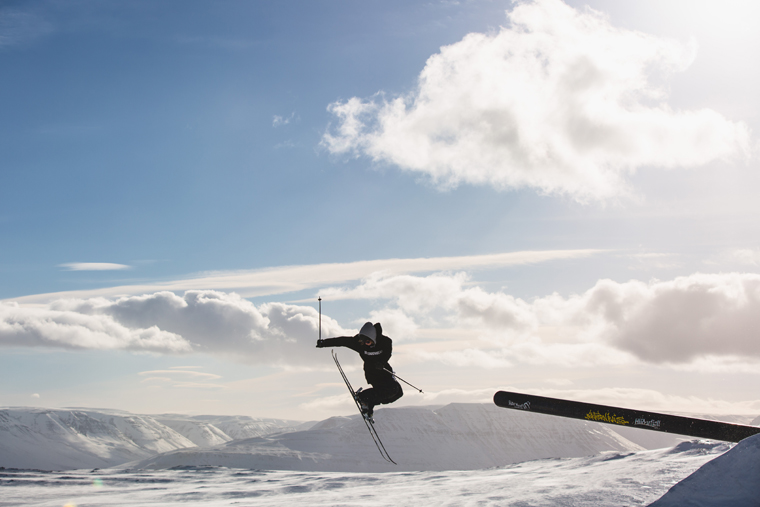 Eventual winner Siver Voll, on his way to victory

As the weather draws in and clouds cover the sun, the organisers decide to use just the three rails and first jump.  Buffeted by the increasing wind, all the competitors still throw down impressive runs before running away to the lodge and awaiting the results. 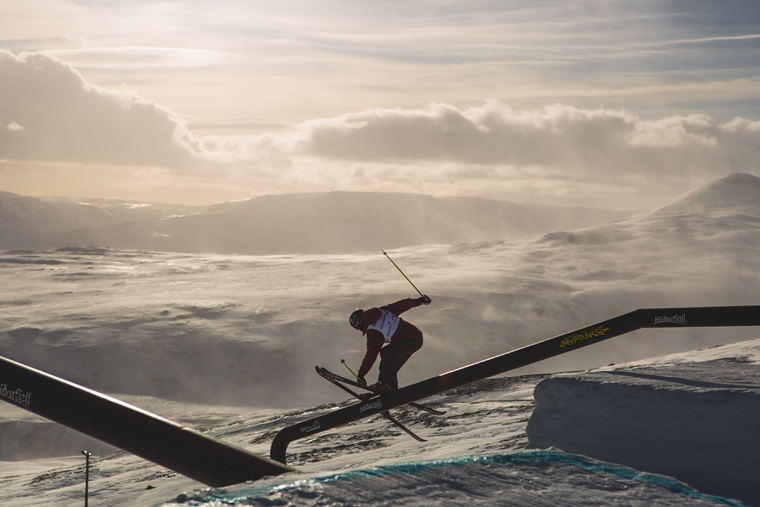 For the second year in a row, relative unknown Siver Voll of Norway takes the crown. Well, not just one crown, 1.8 million Icelandic Krona, which works out at about £8,800.  Robbie Franco took second and Noah Wallace third, both talking home big prize purses, “I’ve never won more than $700 before” beams Robbie, as his converts his prize money into over $5000 US dollars. 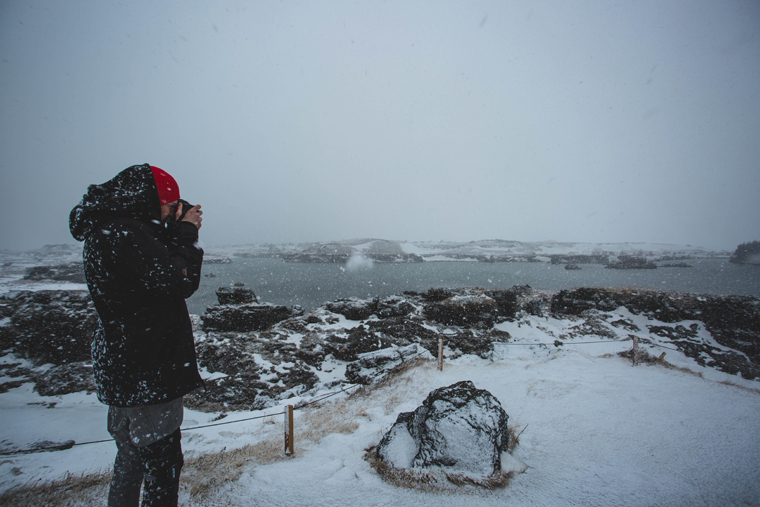 The next day the weather is worse still, winds blowing well over 50mph. Despite warnings not to go outside Nate and I venture around to snap some photos and experience an Icelandic storm. Perhaps we’ll get a ski tour in tomorrow?

Alas, on our final day the winds are still too high to ski so instead we are taken on a tour of the local geological features, old volcanic regions, boiling mud pools, geothermal baths and, once the sun sets, a hunt for the Northern Lights. 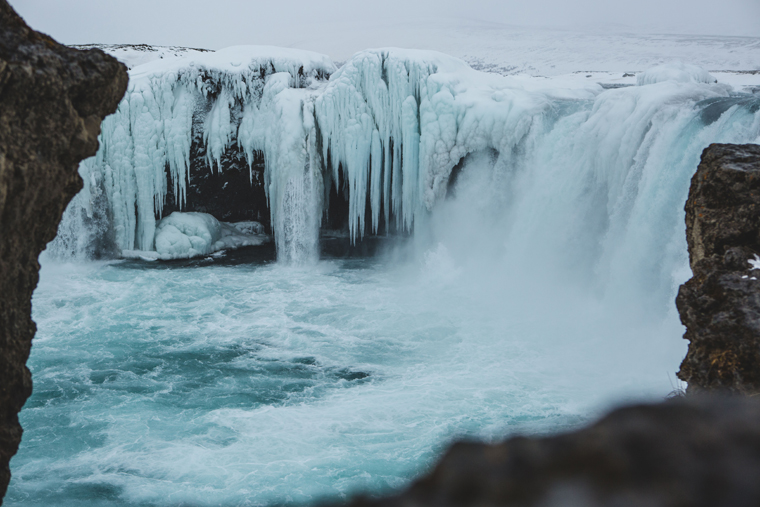 Iceland is a world of ice and fire and it’s incredible to see it up close and personal, snow drifts melt on sulphur steaming rock piles while waterfalls cascade through ice.  All the while the mountains loom around with lines that have never been touched by skis.  The potential is out of this world. 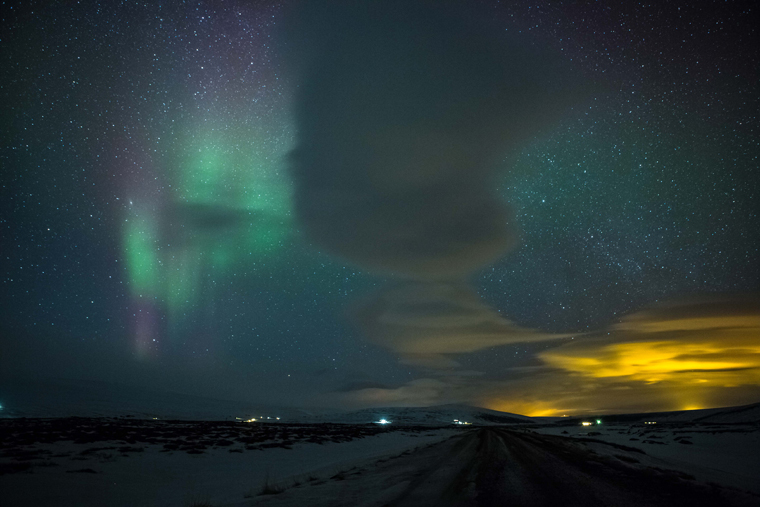 Lights in the north

The day falls into night, the clouds part and the Aurora Borealis put on a show for our cameras.  What a parting gift. The weather may have kept us from skiing but it gave us the chance to experience northern Iceland, it’s food, culture and spectacular geography.  We will certainly be back when the weather clears.