Got time and funds for a big adventure in late spring? Here’s Fall-Line’s backcountry editor Martin Chester with inspiration

When the sun creeps high above the horizon and the days get longer (and warmer, drier and brighter), if you insist on staying in the northern hemisphere, I reckon you have three choices to keep on skiing: go high, go north, or go where the biggest dumps of snow have been this season in the hope that enough of it lasts.

We are looking at high altitude and densely glaciated regions hat continue to deliver the goods long after the crocuses creep through the valley floor. Two great examples include:

The Bernese Oberland
Heading up from Grindelwald, the amazing Jungfraujoch railway will whisk you up to 3454m above sea level. Here you gain access to a magnificent area of wild expansive glaciers (a UNESCO world heritage site) that holds snow well into June in most years.

The area hosts a breathtaking vista of peaks at high altitude, which make it a ski mountaineer’s paradise, as well as an excellent network of mountain huts. Skiing through the Louwitor you can make the classic 2000m descent of the Lötschental to Blatten (at 1542m) in a single day. Or you can spend a week or more skiing hut to hut and going from summit to 4000m summit, with the satisfaction of beginning your tour a couple of thousand metres higher than you’ll finish.

How to do it
Several companies offer group guided trips: Jagged Globe; Mountain Tracks has advanced tours in  April and intermediate tours; and Alpine Guides has a late-April trip too. 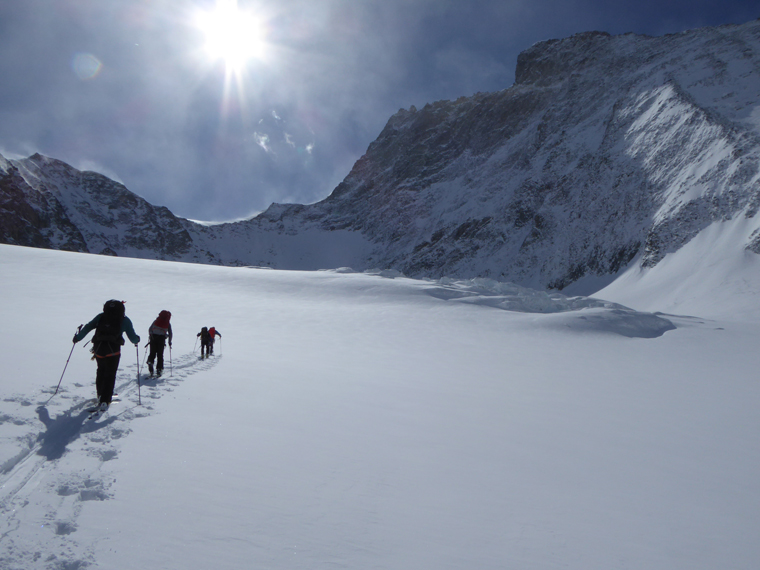 Paradise is… the Bernese Oberland, with glaciers that hold snow well into early summer

Mont Blanc
The season for ‘The Blanc’ kicks in just after other ski areas shut down. This is a big-mountain adventure that should be on everyone’s bucket list, but it’s high, hard and super-exposed. To reach the summit at 4810m, don’t expect to rock up unfit, without acclimatisation, or you’ll be disappointed (at best).

Pick a guide or company you trust and go for the one that offers an acclimatisation programme first. In fact, most guides won’t take you there until they know you and are sure you’re up to it. Much of the ascent (and often much of the way down) will be on crampons on icy terrain. See the altitude as an advantage, as it gives you an excuse to enjoy some great high-altitude skiing in the week leading up to summit day. By the way, if you have the cash (and the karma), it is possible to reach the Italian summit by heli-drop.

How to do it Mountain Tracks runs week-long trips and there’s inspiring info on its website. Jagged Globe offers a Mont Blanc ascent in early May as an add-on to its Bernese Oberland trip.

Satisfy your Boreal urges with a foray into the Arctic circle. If you’ve been doing your homework this season you’ll have a host of ideas in Norway, from boat to motorhome. But for something a little different, take a tour on the wild side in…

Iceland
The Troll Peninsula of Iceland is the new Norway. Folks have been ski touring here for years, but it’s a little wilder, a little less travelled and offers a little something more than the Norwegian experience. There are numerous ways to do it, such as exploring by motorhome or enjoying the superb sail and ski combo. Or you can blow your cash on heliskiing, which has been pioneered here by IFMGA guide Jökull Bergmann. Guests stay in comfy cabins at Klængshóll Lodge, a converted sheep farm on the site of a Viking settlement, and explore the fantastic surrounding terrain with guides from Iceland, Canada, France and Switzerland.

Quick tip: everyone I know who has skied in Iceland says they wish they had allowed as much time to explore this amazing land of ice and fire as for skiing – so build a few geysers and hot springs into your itinerary.

How to do it
Visit arcticheliskiing.com/en to find out more. Its season usually lasts until the end of June.

Greenland
This ‘is a barren land – a land that bares no green’ or so the song goes. If you like the idea of packing a gun with your shovel and probe, this could be the frontier for you.

This is the summit to sea experience on steroids, with wilderness and culture thrown in. Many of my colleagues have been sneaking off for Greenlandic heliskiing in May for some time now. In fact, one of them loves it so much, he bought the… Well he bought an amazing ski lodge, anyway!

Matt Spenceley is a British Mountain Guide who runs Pirhuk Greenland Mountain Guides in East Greenland. Most of the alternative trips in this area stay at his base, or use his services to plan their logistics. Check out this amazing 20-minute film by Ben Tibbetts to be inspired.

How to do it
April to the middle of May is prime time. See expeditiongreenland.com and eaheliskiing.com.

GO WITH THE SNOW

This winter has been all about that wacky southern jet-stream. At the time of writing, some of the southern resorts have had hi-uge dumps of snow and it looks set to stay that way. Some of the biggest can be found in…

The Pyrenees
This fabulous mountain range often gets overlooked as skiers favour its big Alpine sisters. Being so
far south the mountains earn a reputation for being hit and miss with the snow. But with the sea on both sides, when a southerly jet-stream dominates – the likes of which has shaped this winter – they are sure to be a hit.

Everyone has heard of the big Andorran resorts, but on the French side there are a collection of hidden gems (such as Les Angles and Font Romeu) with great terrain and a choice summit or two nearby. 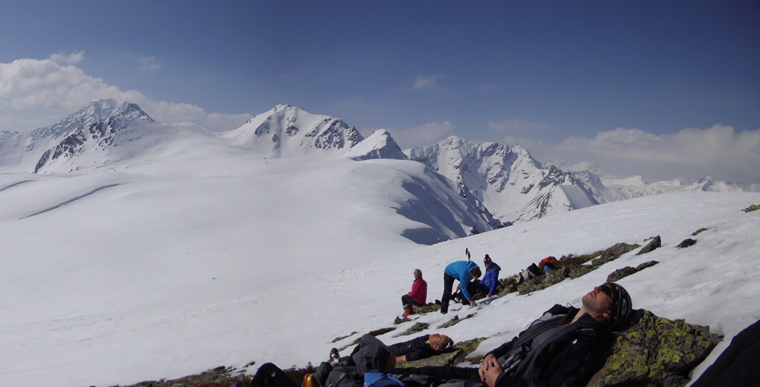 Taking a nap before taking on the Vallée du Galbe, the epic Pyrenean spring snow route

I like to sneak off the back of the resort of Formiguères and head to Refuge des Camporells. The hut guardian suggests a great circuit that looks all wrong until you realise this place is not about north faces but about spring snow, and hitting the southerly aspects with a lap of the ‘Perics’.

Finish the trip with an ascent of the Pic des Mortiers and descent via the Vallée du Galbe. The verb ‘Galbesque’ describes superlative spring snow conditions in these parts and, if you get the timing right, you’ll be amazed. Subtle changes of aspect guarantee creamy spring snow through March and April from 2600m to 1500m in a good year.

How to do it
See bmg.org.uk to find a British mountain guide to take you to the Pyrenees. I’ve always stayed with Ian and Ange Pendry of Altitude Adventure.