When the first freshies arrive, where to head for a swift powdery fix? Martin Chester, our backcountry editor, asks four seasoned snow-seekers to reveal their top spots for an early backcountry mini-break

Skiers love a secret stash, and where better to hide something than under their noses? So it is with the Val d’Hérens, tucked out of sight between Verbier  and Switzerland’s “worst-kept secret”, the Val d’Anniviers.

In fact the Val d’Hérens almost became Verbier’s fifth valley when plans were drawn up in the 1960s for a cable car up the Pigne d’Arolla and a mountain railway up from Sion. Instead the big money went west (and east) and only a few small lifts were built here. There’s a creaky two-man chair in Evolène, but otherwise it’s all drags. Riding the 600m vert of the Forclaz T-bar is an experience never to forget, while each 900m drop from the top of Arolla means a 900m button drag back up for a second go. Boarders beware!

So what about the good news? Well, straight off the lifts you get up to 1200m of descent, starting high above the tree-line on wide faces, dropping through forest clearings and down through Alpage hamlets into the valley bottom. This is skiing in chocolate-box scenery, with the 4000m giants of the Dent Blanche, Dent d’Hérens and Matterhorn providing the backdrop. Lots of it is shady and cold (Arolla is at 2000m) and lots of it is over rock-free, grassy hillside so it’s great in the early season. The trees in Evolène and La Forclaz are fun on bad-weather days.

Add in some touring and the possibilities are huge. An hour above the Evolène lifts the Pic d’Artsinol (2998m) has big descents on all aspects. From the Arolla lifts you’ll spot skin tracks heading through high cols where an hour of up wins 1500m down. More committed backcountry purists shun the lifts altogether, leaving from the car on the Arolla road, or even from the early bus.

For the fit, Pointe de Vouasson is a good challenge, a mere 1700m from the road… Luckily there’s the newly renovated Aiguilles Rouges hut on the way – Arolla to Evolène with an overnight in the hut makes a great two-day tour, finishing with a 2000m north-facing descent (this is a glacier so be prepared).

British skiers are as wary of public transport as they are of breakable crust, but if there’s one thing the Swiss do well it’s punctual trains and buses. This means the Val d’Hérens is easily reached from Geneva airport: two hours by train to Sion, then 40 minutes by bus to Evolène. Having said that, a car is handy – there are three separate areas in the valley, and a drive gets you to Nax or into the Thyon-Les Collons area (formerly the fourth Verbier valley). Shared car hire from Geneva can work out cheaper than public transport. 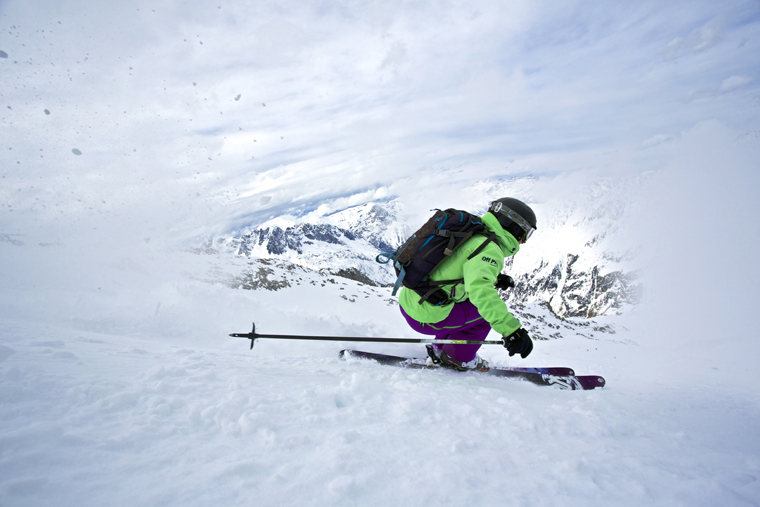 Chamonix Mont Blanc is renowned for being the ski mountaineering capital of the world, and skiers either love it or hate it. If it’s a short break off-piste skiing you’re looking for, it’s likely you’ll love it. It’s just over an hour from Geneva airport, early season weekend deals are plentiful and ski pass rates are reduced till mid-December. Being such a steep-sided valley it doesn’t get much sun in December and January, so the early snow stays cold and fluffy.

Chamonix is made up of four separate resorts: Les Houches, Brévent–Flégère, Les Grands Montets and Le Tour; five with the Aiguille du Midi. So there’s always somewhere to suit the prevailing weather conditions, and every aspect and altitude to choose from.

Les Houches and Brévent–Flégère are early season favourites, with trees for definition and shelter from the wind.

The valley would be very different without Les Houches, the gem to retreat to when visibility is poor or winds are high. As one client told me: “When we saw the weather conditions we thought we wouldn’t get any skiing this weekend, let alone off-piste. Then we were introduced to Les Houches, skied powder all weekend and ate in charming little restaurants.” My favourite early season descent here is to ski the trees and then the meadows of Le Pralet to St Gervais, then get the train back.

On sunny days after a snowfall, head to Brévent–Flégère, and here’s why. At the bus stop at Les Tines you’ll see people with fat skis and rucksacks on the right-hand side of the road waiting for the bus to Les Grands Montets. On the other side you’ll see people with carving skis. That’s the bus you want. Let the powder hounds go to Les Grands Montets, leaving plenty of space for fresh tracks for you at Brévent–Flégère.

Having said that, a visit to Chamonix wouldn’t be complete without a trip to Les Grands Montets. The Canadian Bowl and Italian Bowl are famous off-piste descents but, as a victim of their own success, turn into mogul fields in spring. In December, if you get on the first lift, fresh tracks are a distinct possibility. Being surrounded by the backdrop of Mont Blanc, the Chamonix Aiguilles and the Aiguille Rouge makes this a truly spectacular spot.

For a short ski tour, the Aiguillette des Houches (2285m) is ideal early season. From the top of the Brévent cable car descend to Lac du Brévent. Then climb 200m towards Col de Bel Lachat and on to the summit of Aiguillette des Houches. Descend the short steep slope on the south side, towards Les Houches, then continue left on easier slopes towards Chalets de Chailloux. Finally, pick up paths and clearings in the forest to head towards Le Bettey, where you could leave a car, or continue descending until the train station. If you want more exercise, this route can always be done in reverse! 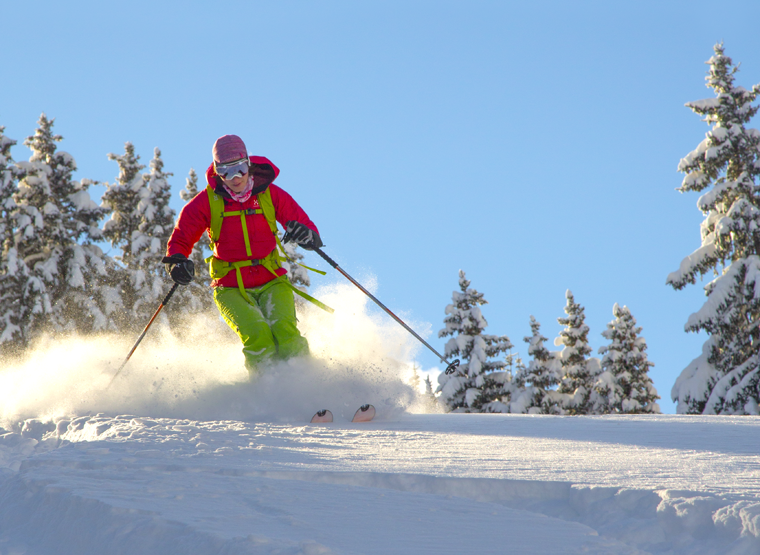 When the first snow falls, I ask myself where to ski before it even hits the ground. While many people look to high resorts for early season snow I usually look low. Many high resorts have boulders to cover with fresh whereas many lower resorts have a grass base. You don’t need nearly as much snow to cover the meadows – and it’s often possible to ski long before the lifts are open if you’re up for some skinning.

The areas of St Gervais, Megève and Les Contamines, where I’m lucky enough to live, offer between them over 400km of piste (covered by the Domaine Evasion lift pass) plus some great off piste and short tours.

St Gervais is best for off piste, with lots of tree skiing and hidden meadows: look at the map and Google Earth beforehand to spot some of the best glades. For steeper terrain head for Mont Joly, which has some great steep lines, but check the avi conditions first as they are pretty exposed.

At Megève my favourite area is reached from the Jaillet lift, as well as from Combloux. There is some superb skiing in the trees and glades. My favourite short ski tour, the Petit and Grand Croisse Baulet, starts at the top of the Pertus lift. You follow the Joulet piste a short way, then skin via the Col du Jaillet up the east ridge of the Petit Croisse Baulet, which should take just over an hour. From the top there are various descents. You can more or less follow the line of ascent, or you can ski down to Le Giettaz – off piste all the way – and ride the lifts back to the start. For
a longer day continue to the Grand Croisse Baulet, which is an out-and-back from the Petit. If there is plenty of snow you can link this with a descent to Praz-sur-Arly from the Torraz lift and the bus home.

Les Contamines has fantastic touring and long descents, but it’s all above the tree line so if visibility is poor, stick to St Gervais or Jaillet where there are plenty of trees. If the sun is out there is open off-piste skiing on all aspects and as steep (or not) as you like and the conditions dictate.

If you fancy skinning, the Col de la Fenêtre is a great starting point: an hour’s climb gives a couple of cool descents then a historic Roman road to follow back to the car. The Col de la Cicle is a two-hour skin, while the Col des Chasseurs is accessed from the Cicle. For a solid day out, cross the Fenêtre, skin up to the Cicle then ski down the Chasseurs, ticking all three in one day.

Well, there is some of that, but look beyond the pistes and fur-trimmed ski suits and there is fantastic early season touring potential. Out behind Courchevel Moriond (1650) the Les Avals valley is a day-touring paradise, with the chance for a cheeky hut night too. From the top of the Roc Merlet and Chanrossa chairs, a traverse under the Roc Merlet and a short walk or skin takes you to a shoulder, the gateway to this playground. Underfoot, the terrain is mostly grass, so shallow snowpacks won’t do too much harm to shiny new skis here.

The Col des Saulces is many tourers’ first port of call, an hour’s skin from the valley floor. An extra 45 minutes of effort will take you to the table d’orientation on top of the Petit Mont Blanc, with spectacular views over the Pralognan valley, Grande Casse and Glaciers de la Vanoise. A worthwhile diversion on the way back involves a short extra skin to the Plan des Baux from where the north-facing Combe des Roches will often give great powder back to the valley floor.

Around the head of the Les Avals valley, many lines grab the eye; Roche Nue and the Aiguille de Chanrossa have north-facing slopes and couloirs that are worth the climb. The Lacs Merlet hut – un-guardianed in winter – is a perfect base for a night or two, with great views of the couloirs on the Aiguille du Fruit’s east face.

The jewel in the crown here is the Brèche de la Portetta – a steep skin from the Combe des Roches (better practise those kick-turns) to a 40m deep sabre-cut corridor through the rock walls of the Dents de Portetta ridge, giving access to a stunning 45° couloir followed by great open skiing down to Pralognan (taxi or bus back).

B&Bs and apartments are available in Bozel, from where a bus takes you to the Courchevel lifts. Most years it is possible to ski back down to Bozel at the end of the day, too. Slightly further down the valley Brides-les-Bains has two- and three-star hotels at reasonable prices that take short bookings. A telecabine from there takes skiers to Méribel, from where a fast lift links to Courchevel.