Fitness for Alpine racers is getting ever more sophisticated, says Graham Bell

A television documentary about Franz Klammer produced in the late 1970s at the height of his success, focused on his brutally tough fitness training regime. One section that stuck in my mind, as a young racer growing up in Scotland, was the ‘Abfahrt training machine’ built by Innsbruck university. Wearing ski boots, Klammer would click onto the machine’s two metal girders that were then jolted aggressively by the set of camshafts that revolved randomly underneath. The machine made an awful racket and looked about as dangerous as racing the Hahnenkamm itself, but there was The Kaiser, legs pumping wildly, as he tried to hold a tuck position.

At the time, Innsbruck University was at the forefront of ski conditioning research, developing a set of fitness tests used as part of the entry qualifications for Stams Schigymnasium in Austria, which my brother Martin attended in the early 1980s. The tests, adopted by the British Ski Team, I remember well: the Hexagon and raised Hexagon jump test, measured plyometric speed and agility; standing jump and sergeant jump tested explosive strength; and the dreaded 90sec box jump measured anaerobic endurance. A few years later, when I was racing for the British junior ski team, we got to visit Innsbruck University for some fitness tests, luckily for us the ‘Abfahrt training machine’ was out of action. 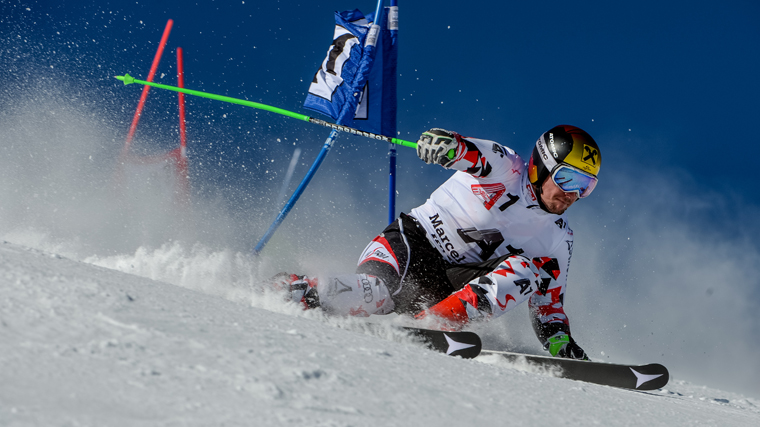 Sports science has come on leaps and bounds since then, but the level of athlete that alpine skiing produces has not diminished. It is not scientific, but it is no surprise that the TV show Superstars, was consistently won by alpine skiers: Ingemar Stenmark, Hermann Maier, Bode Miller, Alain Baxter. Alpine skiing is the ultimate open sport that requires an athlete to react to constantly changing conditions, performing extremely athletic powerful manoeuvres, while balancing on two sharp metal edges and have the endurance to keep that up for the entire length of the run.

Alpine skiing training programmes to produce the ‘complete athlete’ vary greatly, and often follow trends set by the sports current stars. Cycling has always been a skier’s favourite, but Hermann Maier took it to a whole new level, spending hours on a turbo trainer and even opening the prologue of the Tour de France. Bode Miller apparently liked to train rustic style in the woods and Marcel Hirscher credited CrossFit with his new power in GS last season.

Laboratory-based physiological testing replaced the Innsbruck University field tests in the early 1990s, with VO2 max (the maximum rate of oxygen consumption as measured during incremental exercise) considered the standard test for endurance, power was measured by a 30 second bike test and Cybex machine measured quads and hamstring strength. The British Ski Team ran three sets of tests over the summer period; most of the tests were run to exhaustion and it could take a few days to fully recover. Sports science was improving fast, but with some of the testing procedures it was hard to say who benefitted more – the athlete or the scientist. ‘No Pain No Gain’ was very much the motto for training programmes and, when we trained together, it always seemed to come down to who could squat or bench the heaviest weights.

In the two decades since I retired from competitive ski racing, sports science has moved on considerably. Ex-British Team skier and current British Team coach Noel Baxter sums it up: “the macho training methods are a thing of the past; the focus is now on training smart. We always look for perfect form when lifting weights rather than who can load the bar with the heaviest weight.”  Balance and co-ordination exercises are built into strength programmes and core strength is given much more priority.

The testing has improved too. VO2 max tests to exhaustion take too much time away from the actual training and are used less frequently, having been replaced by more regular lactate testing, which determines the optimum training level of each individual athlete. Tour de France winner Chris Froome only took a VO2 max test recently to ally doping allegations, as the VO2 max is not normally used by Team Sky because they use power meters to monitor each cyclists output in every training session and race.

That is not to say that life as a ski racer has got easier – far from it.  Modern sports science covers every aspect of an athlete’s lifestyle, diet and training programmes, all of which are constantly being monitored. The theory that small, incremental gains lead to big changes in performance, means that nothing is left to chance and athletes must remain professional and stick to the programme at all times. That is, if they want to compete with the likes of Marcel Hirscher or Lindsey Vonn.