With new innovations every season, airbags are getting more reliable, and more convenient too. Here’s our pick of the best out there

Hell, this was noisy when we saw it recently, but also exciting. And instead of a canister blowing up the airbag, you’ve got a battery-powered jet fan. So more weight to carry (thanks to all those cells) but it does mean you can practise (as it’s mains charged), get on any plane with it, and pull when you’re not even 100% sure of a slide starting (so you potentially deploy earlier – not a bad thing). Inflation time for the 200L volume is 3.5 seconds. Then it keeps topping up the bag with air blasts as needed.

Anyone who has owned a Deuter will know they’re comfortable and well engineered. (Fall-Line has one that’s on season four and still great.) Anyway, the idea behind the name is the integrated ABS twin-bag system will keep you ‘on top’ of any avalanche, while it’s packed with features including hip fins with pockets (think energy bars), reinforced safety gear front pocket for shovel etc, various mesh pockets and a key clip. Look out for the women’s specific version, the SL.

This day pack (also available in 30L) will easily eat up most of what you throw at it unless you’re really heading into the wilderness. And it comes with integrated ABS avy system, height adjustable control on the left shoulder strap, front panel padding to stop skis/shovel/probe chafing, plus ice axe attachment that you can easily grab one-handed and with the pack still on. Neat.

Is there anything Ortovox are not doing well at the moment? Clothes, beacons, shovels… and now airbags. And this 20L one is an addition to their strong entry into the ABS market. It comes with the first removable M.A.S.S. ABS unit (modular airbag safety system, in case you were wondering), which is a unique feature of all Ortovox airbags. Usefully, you can move the release grip attachment right or left side too, and alter the height/angle. The Polygiene finish aims to limit bad smells/odours too. 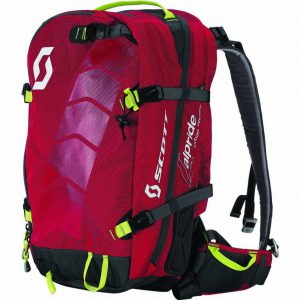 The big news here is a cartridge that you’re allowed to take on planes (as it complies with International Air Transport Association) so you avoid the carry-on chaos of most airbag systems. Very good. It’s not too bulky either at 1.46kg, and has a simple layout: one main compartment and another avalanche rescue equipment pocket.

Oh, it’s only money! And you do get built-in ABS, nylon that’s so tough its trademarked as Bombastic, and stuff like large avi tools pocket, reinforced high abrasion zones and proprietary metal hip-belt buckle for superior breaking resistance during an avalanche. Now where’s the heli? Bring on the spines!