The Grand Pre is a slow turner. But with mellow pistes, cliff bands and kickers, plus access to a steep and intense couloir and some of the best off-piste in Val d’Isère, it’s well worth the wait

Here it comes”… Whack! “Aaaaarrrrgggh, gets us every time doesn’t it?!” “Yeah, remember when all chairs were like this? Fast when they come round to crash into your calves and slow while they take you up?”

Val d’Isère’s Funival from La Daille, and Olympique gondola from town, ferry hoards of skiers at a remarkable rate onto Bellevarde’s slopes. Meanwhile, the slow and steady Grand Pre chairlift, set a little distance back from the main drag, remains sparsely populated even at the busy times of year, allowing for long-lasting fresh snow. I’ve been skiing in Val for over 20 years, and when Grand Pre is suggested by someone in our ski group, the answer is invariably: “Heck yes.” 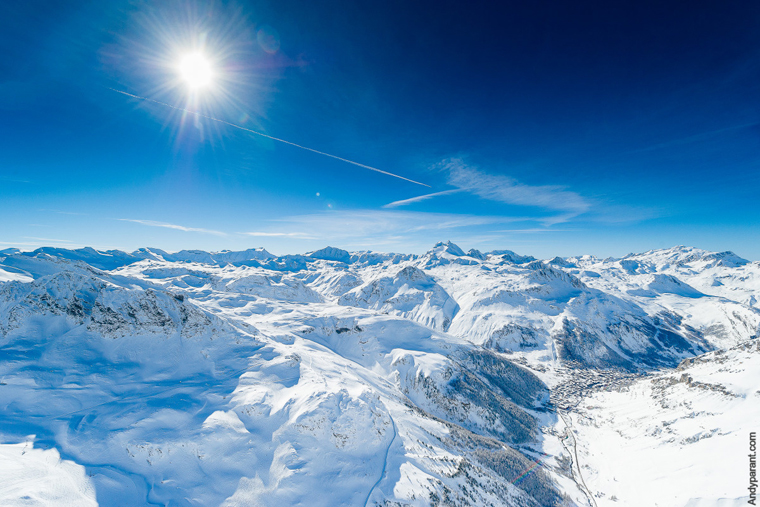 It’s hard not to have a fondness for the chairs that haven’t been ‘expressed’ yet; that haven’t been industrialised. In high-tech resorts like Val d’Isère these slow-turners are a dying breed. It’s a shame in a way because, well I find, when something moves at a slower pace and you have no other option available, you are forced to concede, to relinquish your pace for its. You give in. You can’t be hurried or frenetic. Which in turn means you find yourself with time to think.

Except there’s a catch. The Grand Pre chair lifts you up to some of the most thrilling descents in the Espace Killy, and on most occasions I find myself ascending this slow chair, I’m filled with excitement at what is to come when we reach the summit.

There is something for whatever ski mood you’re in. The descents fall into three distinct categories; four if you count the mellow pistes (I first learned to snowboard and telemark on these pistes, which are consistently gentle and relatively unclogged, they might as well be on Fornet).

Under the lift line there is a long series of mini-golf and kickers, which offer plenty of opportunities for steep practice – not to mention some airtime. This is the face with some of my most reliable (not too big) cliff drops, and the way the contours roll over into the bowl preceding the chair is always a fun place to experiment without much exposure.

If you’re after something more adventurous, head for the Couloir Pisteurs. Hike to the peak of the Rocher du Charvet from the top of the chair, then walk along the top until you reach the entrance of the couloir; it’s a good 45-minute slog and the entry is not easy to locate, so best to go with a guide.

It is also possible for slides to occur on runs this steep, so be sure to ski it when the snowpack is relatively stable (it faces north so the snow’s usually pretty good).

The couloir splits like an inverted ‘Y’, a dramatic channel through the rock visible from the opposing piste, Fontaine Froide. It’s a long way down so save this one for your best.

If that’s a little too hot to handle on a particular day, but you’re keen for some fresh tracks, head off the back of Grand Pre and round the Charvet peak down to the Manchet Valley: the Tour de Charvet. There are a myriad of options on this long, open bowl. Following the river down to the left brings you around to the Manchet chair, up to Solaise.

Whichever route you take, you’ll feel as if you’re in the middle of nowhere, with no lifts, buildings or other people in sight. For longer tours later in the season, there is the Refuge du Fond des Fours up across the other side.

So that’s it, a lift with options: where you can get freaky if you feel the need but, equally, where you can chill out and take things at your own pace. Good times!