The new leaseholder at La Grave, one of Fall-Line’s favourite places to ski, starts a 30-year contract to operate the resort’s lifts next week

SATA, the company that runs the nearby resort Alpe d’Huez, takes over operating the Telepherique des Glaciers de la Meije on 15 June. The previous lease was held since 1987 by Denis Creissels, the engineer who designed the colourful two-stage pulse gondola (1500m to 3200m) that carries skiers sedately into La Grave’s famously untamed terrain.

Fans of the French resort – an off-piste playground with minimal infrastructure and a small, uncommercial village – are pleased that the contract stipulates keeping the area’s sporty, wild and natural character. 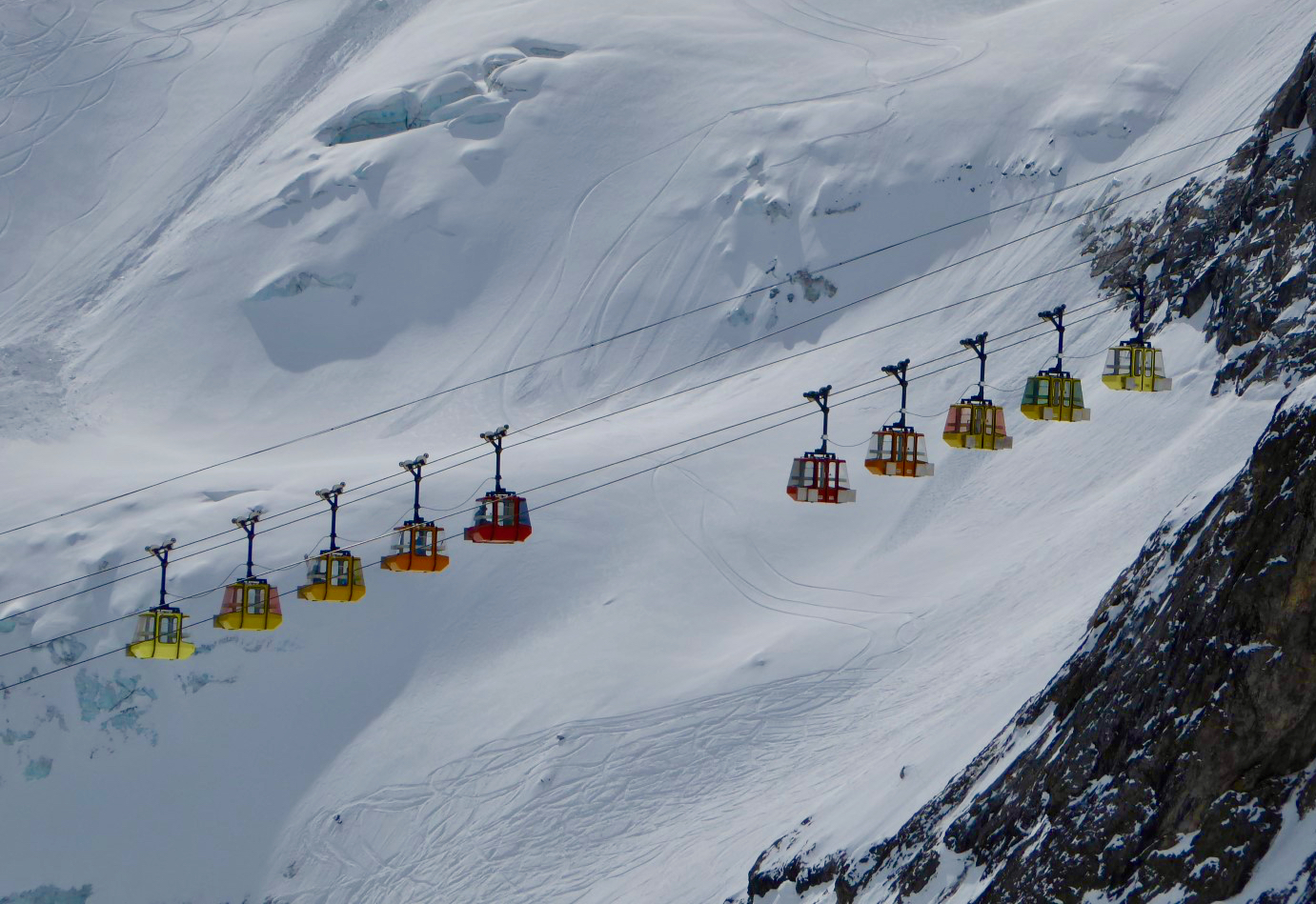 With just three lifts, almost no grooming, no snowmaking, no avalanche blasting, 2150m of vertical, and couloirs, cliffs and steeps aplenty, La Grave is an antidote to today’s vast interlinked mega-resorts. The mountain is free of markers and signs, and half of skiers there – who range from plucky advanced intermediates to extreme adventurers – are out with a mountain guide. Locals call it ‘ski sauvage’, and it has changed little over the decades.

“Five runs a day is what a fit, accomplished skier can expect to manage, and it has been known for novices to cry their way down,” wrote Swedish mountain guide Pelle Lang in Fall-Line in the early 1990s. He had migrated to La Grave from ‘too busy’ Chamonix to set up the Skiers’ Lodge, which remains at the heart of the village community today.

What does the contract say?

Last month the contract between SATA and the commune was made public, outlining aims and responsibilities.

SATA must invest in the lifts and bring them ‘up to standard’. It must renovate the base station and the two mountain restaurants – at the gondola mid-station and the top. It must keep on existing staff.

A question mark lies over the future of La Grave’s topmost 400 vertical metres. Its third lift is a T-bar on the Girose glacier, accessed by a snowcat tow from the top of the second gondola, and taking skiers to 3600m. Most people ride it to access awesome freeride and touring terrain, but it also serves the resort’s only pistes. 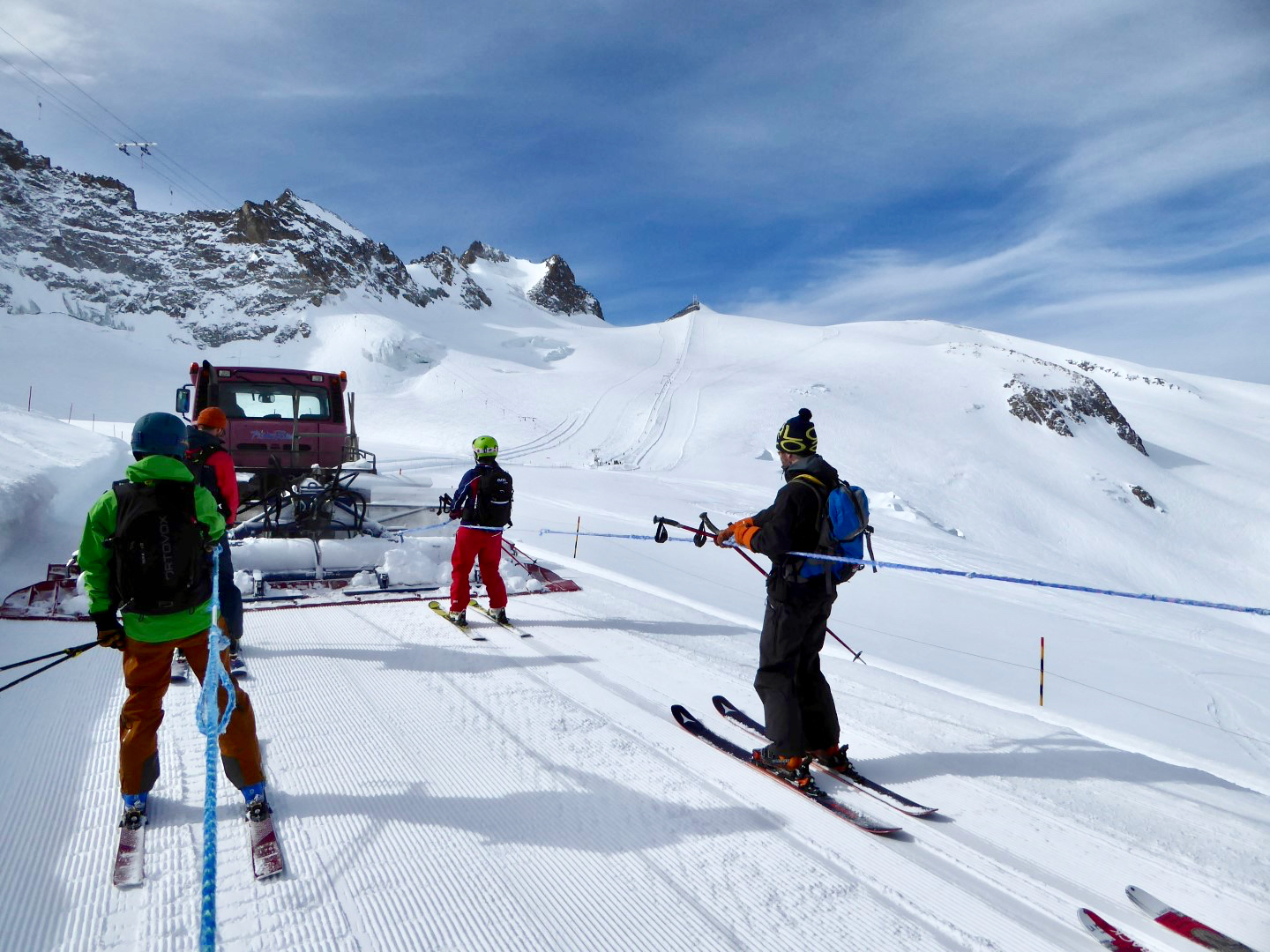 Getting towed by a snowcat to the T-bar (centre), flanked by La Grave’s two pistes with crevasses and seracs not far off to each side | Photo: Yolanda Carslaw

Flanking the T-bar, these amount to about 5km and are mostly used by occasional day trippers from Les Deux Alpes over the back (there is a way over but no ‘proper’ link), and local children doing race training. This scene is growing thanks to dynamic ESF instructors, so paradoxically for an off-piste resort, there has been concern locally about the future of its pistes, limited as they are.

Under the contract SATA must investigate building a third gondola to 3600m to replace the t-bar, with the aim that it would be used by pedestrians in summer too: the contract emphasises the need to attract more summer visitors. This would require external funding of at least 3.5 million euros, but could be postponed or abandoned if funding and authorisations aren’t secured. Whatever the case, a budget has been allotted to maintain the existing T-bar and piste until at least 2021.

Some locals are keen on the idea of a third gondola to 3600m, while others fear it would attract a greater volume of unguided skiers over from Les Deux Alpes, who often don’t have the skills and know-how to ski safely in La Grave’s glaciated freeride terrain.

The famed American Mountain Guide Joe Vallone, who has been guiding in La Grave for 15 years and living there for six, says: “A third gondola would be a complete waste of money. The glacier is receding at an alarming rate anyway and if this is to be primarily a pedestrian target audience then it is even more wasteful. People don’t come to La Grave to see the Meije like they go to Chamonix to see Mont Blanc. And when people come for the day from Les Deux Alpes they ski a little, spend no money in the village, then cross back home for the amenities we don’t have.

“I would take down the t-bar and leave the dying glacier alone in its natural state. From the 3200m gondola station there’s already some of the most amazing lift-accessed ski touring in the world.”

“La Grave was already saved by Denis Creissels when he signed the 30-year lease back in the 80s. Instead of being saved, La Grave needs to be managed; to evolve. That doesn’t neccessarily mean change, but modern management, marketing and upgrades.

“I would make La Grave an exclusive product, because it is. There is not much left in the ski industry that can provide that exclusive experience as we see more and more conglomerates swallowing up little guys. In five to 10 years people will be searching for the last of the La Graves as there are not many left, and the mega-resorts are getting more and more expensive and crowded.”

Vallone would like to see online ticketing, discounted early-purchased season passes and flexible opening hours, both in terms of in the mornings and later in spring, when, recently, many resorts have enjoyed great snow (often better than in the ‘main’ season). Under the Creissels’ management, the lift and ticket office opened at 9am, leading to long waits on powder days.

He points out that the contract throws up many unknowns. “We don’t know how mountain guides will be treated, what season pass rates will be and when the lift will open. We don’t know whether there will be a pass for locals who can prove residency or tax habitation. Without villagers turning the lights on, there is no lift. When the lift closes and the town shuts down, you can’t even buy a baguette in La Grave. Give locals an incentive to fuel the community and give them a reason to live there.”

He adds: “What we don’t need is rotting infrastructure that will never see a return on investment. We have seen it before in many places where the motto is ‘If we build it they will come’. I don’t think that works for La Grave.”

SATA’s management of Alpe d’Huez gives reason for optimism on some of Vallone’s points. Lift passes are available online, from day, half-day, multi-day, weekend and weekly passes to non-consecutive, undated 10-day passes. Early buyers can save up to 33 per cent off season passes. The Alpe d’Huez lifts open between 8 and 9am. Fall-Line has contacted SATA to ask about its plans for La Grave within the scope of the contract; no reply has come back but we will run a follow-up story when more details come to light.

Who else wanted to run La Grave’s Telepherique?

Initially there were six candidates in the running for the contract. When offers from potential leaseholders were invited last October by the commune, among the original bidders were SATA, Compagnie des Alpes (CdA, the owner of neighbouring Les Deux Alpes) and a crowdfunded group named Signal de la Grave (tagline: ‘Keep La Grave Wild’) set up by long-term La Grave resident Joost van Zundert, a Belgian. 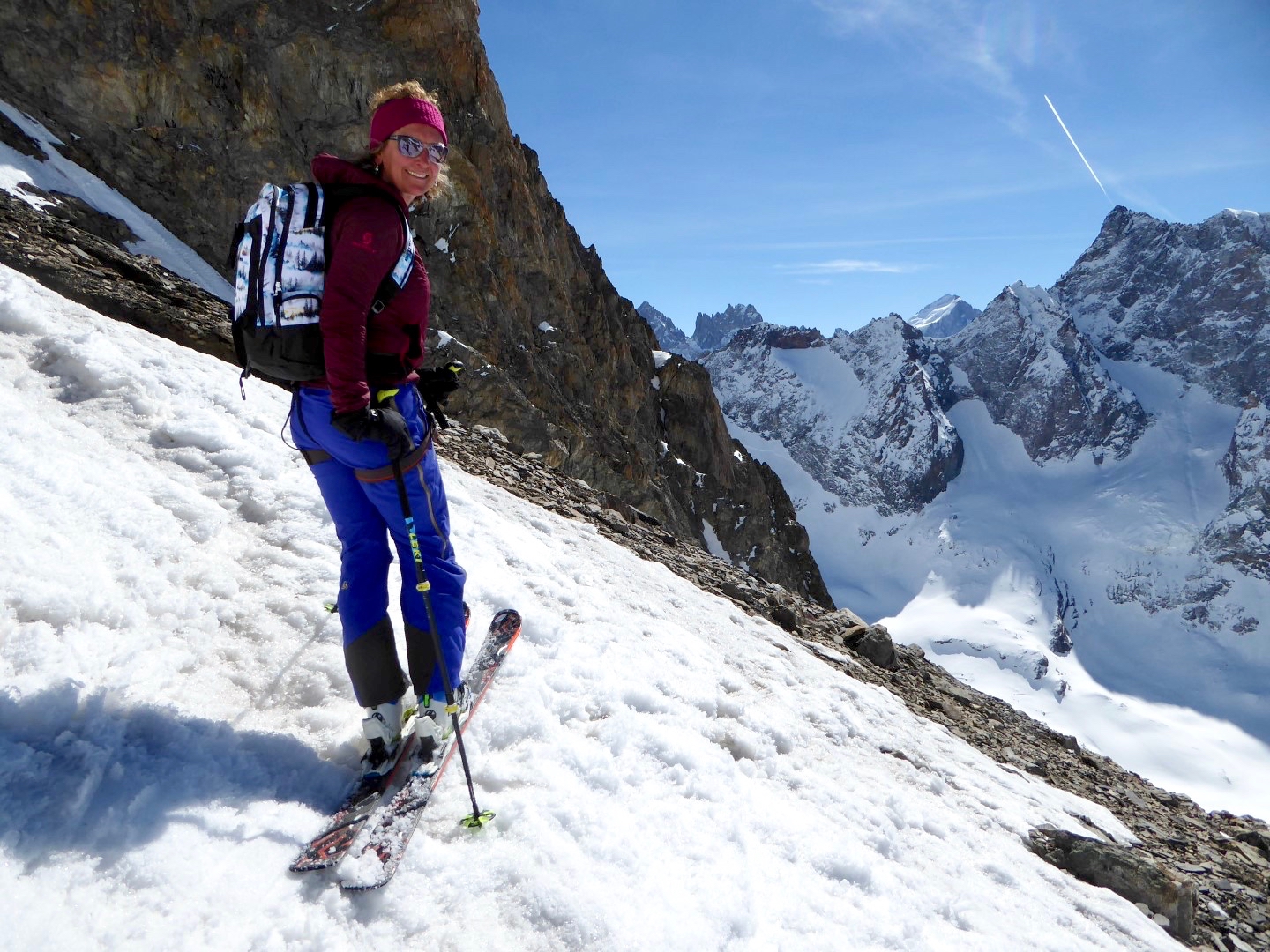 The commune rejected Signal’s proposal and three others, then CdA pulled out, reportedly after not finding a ‘calm collaboration’ possible with the commune, nor having access to certain technical documents. By decision time this spring, SATA was left as the sole candidate.

Despite not winning the contract, Signal de la Grave remains active. It aims to influence and help shape the future of La Grave by arranging discussions with SATA, over things like renewable energy, opening hours/season, provision of local goods and services and even helping raise the funds for a third gondola.

For more of Vallone’s perspective on La Grave, see his article on the website Style Altitude from February 2017 here: www.stylealtitude.com/what-is-the-future-for-la-grave-we-ask-mountain-guide-joe-vallone.html