I have to admit to not even being sure if Crested Butte (CB) was a town or resort (it’s both) until last summer when interviewing Murray Wais, one of the MSP crew. It was at the McConkey premiere, the sun was beating down and winter seemed a long, long way away.

But it was impossible not to catch some of his enthusiasm as the ski-movie producer went in to bat for his home town, claiming in the right conditions it was as good as anywhere he’d filmed. Interesting, I thought. Then a few months later Powder Magazine voted Crested Butte North America’s best ski town and I was sold.

The guts of the mountain is that it’s 1547 acres, and well south of most of the usual Colorado spots. Aspen is the nearest biggie, at around 40 miles as the crow flies, but driving between the two takes over three hours. While coming out from Denver and cutting down US-285, you’re looking at four-and-a-half hours; so not far short of triple the time it takes to get to the likes of Breckenridge, Keystone and Copper from what’s the gateway airport for most Brits.

Yes, you can take an extra flight into nearby Gunnison but, in short, you really have to want to get here, as it’s not obviously on the way anywhere (unlike all the aforementioned I-70 areas). The upside is that this inevitably thins the numbers. And I never queued for more than a couple of minutes for chairs, despite being in town during spring break.

The mountain may be small, but it’s also mighty thanks to all the advanced terrain, and I’m not sure I’ve ever been to a place where the split is so happily slanted towards good skiers (with over 500 acres of double diamond blacks). As a result, if you’re handy, and prepared to hike a little, you really could ski here for a week and be very happy.

Just exploring the North Face area took full two days, and that was with a guide moving me swiftly through all the goodies. The nearer stuff reminded me of the Jane side at Winter Park – packed with huge bumps and dense glade options – while the furthest face, Third Bowl (that hugs the ski area boundary), has a real hardcore, backcountry feel, all cliffs drops and serious steeps; a fantastic trade for what’s just a 20-minute traverse and hike from the top
of the North Face T-bar.

Teo (or Teocalli Bowl to give it the full name no locals use) is also mega. Higher up, it’s again packed with challenges, and double diamonds (15 this time), plus it gets plenty of wind blow from the front side, boosting it well past the resort’s usual 300ins of annual snow. 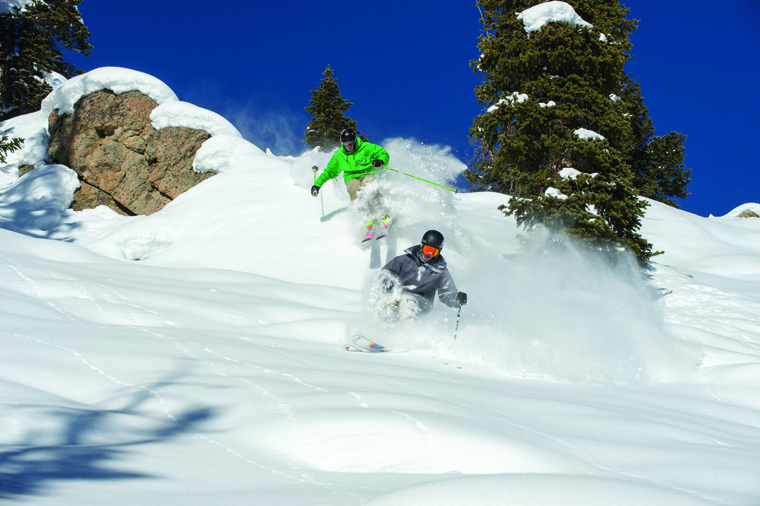 Over the ridge is The Headwall (steep, bumped and challenging, like so much here) and above that The Peak. At 12,162 feet, it’s a 30-minute knacker of a hike thanks to the altitude (even the base here’s close to 3000m) with a very steep, narrow final rise, that I found myself taking on all fours it was so icy. But you do get a juicy initial pitch to ski down, and show-your-Mum views towards Aspen and the town of Crested Butte (a 10-minute free bus from resort).

Powder Magazine is right: it’s good. So good you can actually imagine… living here! Odd for a ski town. It’s packed with indie, reasonable bars and restaurants, and above all, character. Want a weird local beer at 7%? They’ll serve you up something from Fort Collins or a hoppy Odell IPA. Want surfboards hanging from the ceiling in a 50-seat place with great music, tacos and quesadilla? The Last Steep it is. And surely you can’t resist Stash’s Poorboy Special that gets you the athlete’s dream refuel of pizza, tequila shot and pint of PBR for $6?

Pick of the choices back on the hill, and this time the West Side, is Funnel. Well, according to Pete who was showing me round anyway, as conditions were packed and bony as hell, so I needed full pow-imagination. Further down, there are some lovely mellow meadows to blast too. I hit these late one afternoon, just as the ice was finally turning to spring corn and it was glorious. Looking back up, you also get a great view of Hall of Fame. Not on the piste map, this is properly ferocious and apparently one of Seth Morrison’s favourite lines when he’s in town.

Rambo seemed a more realistic alternative to me, if no less absurd, as at over 50° it’s North America’s steepest cut run. I think I quite enjoyed it. Gnarly, but really rather fun. Just like Crested Butte.