Want a unique way to celebrate the summer solstice? Track down a tasty bit of midsummer snow… 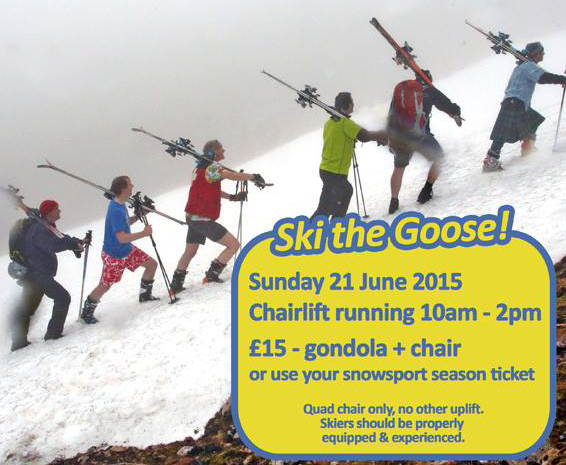 Nevis Range is opening the Quad chair from 10am-2pm so that skiers can celebrate the summer solstice on the infamous Goose run (yes, there’s still snow!). Tickets cost £15 (except season pass holders), but skiers must be experienced and properly equipped. Find out more on their Facebook page.

Meanwhile, Glencoe still has snow cover on Main Basin, Spring Run and Flypaper. Skiers are meeting at 9am for breakfast, before heading up the hill at 10am. The pistes will not be groomed and there is no ski patrol, but you’re welcome to bring a shovel to make your own kickers with. Full details here.

Riksgränsen, is so far north (68 degrees to be precise) that it keeps snow well into summer. Being 200km into the arctic circle, it also benefits from 24 hours of sunshine during midsummer, meaning you can ski under the midnight sun (they even keep the lifts running) during the summer solstice.

The lifts of Hintertux, in the Austrian Tyrol, are still transporting skiers to their lofty, snowsure slopes. And, as is tradition at midsummer throughout the region, local clubs illuminate the mountain tops by burning varying motifs and symbols on the evening of the 20th June, so you can combine your sneaky summer solstice ski with a bit of alpine culture.