It may only whisk you up a measly 305m of vert, but the Indren cable car opens up swathes of magnificent Monterosa backcountry – and not a single piste 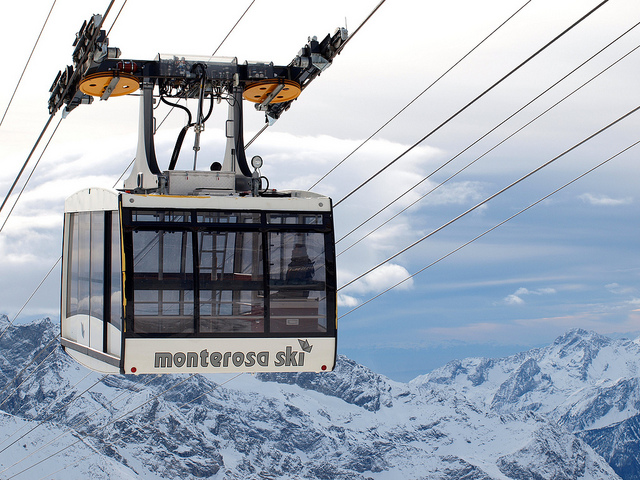 The shoulders of Monte Rosa are fast becoming the thinking skier’s do-anything destination. It has huts strewn up to the Margherita – the highest building in Europe, creaking alarmingly on its struts – and resorts of varying complexity dappled around the base. Resort or backpack-based skiers have huge numbers of options, so now’s the time to pick just the one…

For this trip, we stayed in Gressoney (at the Sciolata Hotel – a winner) and uplifted from Gressoney-la-Trinité. An amusingly shonky two-seater creaks you out of resort, then you zigzag down and up via a couple of reds before hitting the elevation proper. The Alagna side only has one main lift out, and the mid-point at Pianalunga can get pretty cluttered. So warm up before heading up to Gabiet, and then to Passo Salati.

The Indren lift only adds another 305m to Salati’s 2970m, but there are no pisted runs off it. Think Chamonix’s Grand Montets cable car and wind back 20 years when it was just Scandinavians clad in block colours and oversized skis renting apartments in the villages around the base for the season.

Passo Salati has a great restaurant full of serious types seeking serious lines, plus, on our visit, a group of nonogenarian Japanese skiers in sagging onsies led by a chap in a fluorescent outfit with a loud voice (however mad we are, the Japanese are always a crucial step ahead). We hoped they were there for the scenery rather than committing chilly harikiri by straightlining off the top, but if ever there was a view to die for, it’s here.

Our small (but perfectly formed) group were hijacked by the epic scale of the mountains girdling over 200 degrees of vision. Peak after 4000m peak scan left to nearly right around, and we were on the shoulders of the second biggest; Monte Rosa. The Matterhorn looks pointily forlorn in this company, a few kilometres over there. Might as well go for a ski.

The question is, where? Follow tracks to skier’s right and you’ll end up back at Gabiet via a sheltered wide couloir, which is all well and good to get a feel for the place. Maybe a short hike above where you skied before to the Mantova Hut and then down the next line which can get you all the way down to Stafal, the village above Gressoney? Or for the full 2000m descent, cut left and disappear into the vast bowl under Vittoria, where finding fresh lines back to Alagna should keep you busy for a season or two.

After exploring sidecountry the size of a small nation, backcountry big enough to lose several armies in and enough accommodation out in the yonder for said lost soldiers, it was time to head back down the pistes for some grub. Our guide gave us a proper lap of the place, with the route down to Gressoney-la-Trinité delivering a proper workout – relentless reds all the way. As we swung into the Ristorante Morgenrot above the bottom station and announced we’d like cheese on toast, said guide visibly crumbled. He hadn’t saved this treat to be a pit stop. After peering at the menu we decided to munch our way through the world on a stick, burped, had some sugar cubes in hooch, stumbled outside and fell off our skis.

That, friends, is the way to wind down, followed by a beer in the bar with Black Crows skis hanging from the ceiling, or the tiny place opposite the crumbling Grand Hotel for wine and sausage. FL

Crystal Ski does keen packages to the Sciolata and other hotels nearby, flying into Turin (hour and a half transfer). We don’t always go for a package but this is proper value. Early season half board is £689pp, plus lift passes. The food was excellent, as were the rooms and staff. A bit of a find…