According to local legend, Jackson Hole ski instructor Barry Corbet spotted the narrow ribbon of snow between the rock faces and said “one day that’s going to be skied…”, with the first descent by patroller Lonnie Ball in 1967. Today the Wyoming spot is a fixture on every must-do ski list. 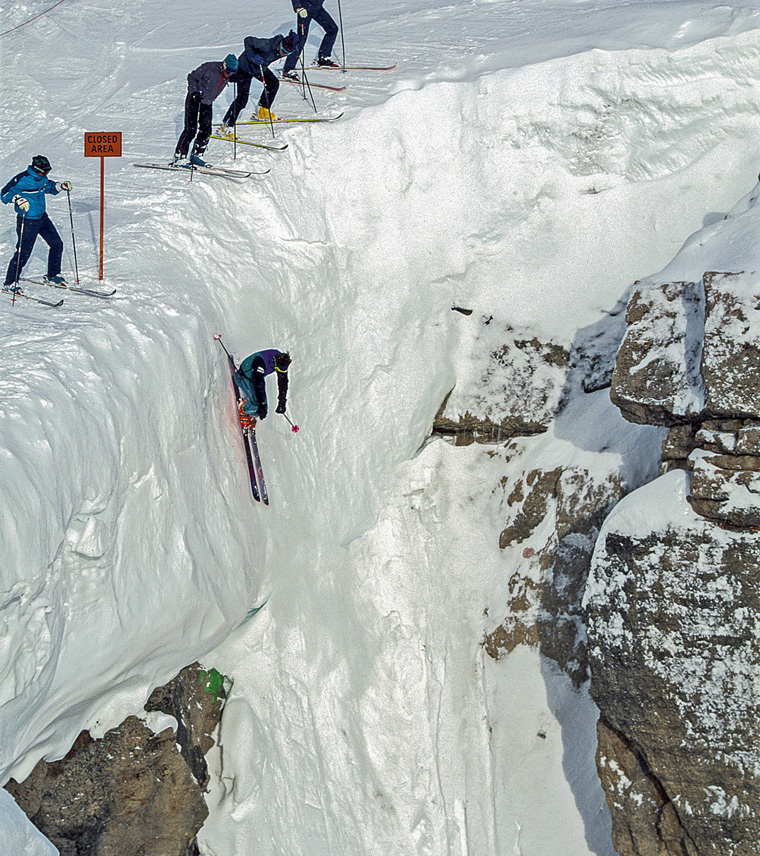 First up, embrace the counter-intuitive. And, when you’re going up the mountain in Jackson Hole’s famous tram, don’t stand to the left and definitely don’t look at America’s most celebrated chute. Why? Because you’re straight on, yet a good distance away; the drop-in looks bigger, the face steeper, the cliff bands more ferocious, and it’s impossible to get an accurate perspective of what you’re up against. In short, it will psyche you out.

I know. I’d been building up to Corbet’s for weeks, mentally preparing from the moment
I booked my Wyoming trip last year, and yet instantly turned to my two friends and said: “No bloody chance.”

Instead, have a good look at the slope from the entry cornice. It’s only a two-minute run down the ridge from the top tram station, and if you decide to pass (no disgrace given since the initial drop-in can be as much as 25ft) there’s an easy out via Rendezvous Bowl.

How big was the drop when we did it last season? Hard to say as there was a good three feet of almost vertical, packed-ice side-slipping available if you wanted it/had the skills, before gravity took hold. But I’d still say it was getting on for the height of a two-storey house. You never know, you might be luckier in a good snow year, but I’d say best be prepared for a jump (and one so big that I scoped the entry lying on my stomach, inching out head first over the abyss).

Another thing to consider, apart from dropping the cornice, is the rock face to skier’s left. Enter the couloir more centrally, away from this, and you have to get a huge amount more air. So the only realistic option for most of us, is: stay left, drop, instant hard right, and wrestle back control before the cliff face on the opposite side is fast upon you. Easy! Well, as easy as things can be on a super-tight, icy, 50° slope with a hellish start.

Yes, I was thrown so far back on landing I was more in the boot than the back seat, but I’m not sure I’ve ever let out such a joyous roar as when I popped back up, stuck in a decent turn and headed for the powder below. Definitely the biggest thrill I’ve had in 20 years of skiing, and made all the sweeter by only seeing four others from outside our group doing it during my three days in resort. Come on, you know you want to!

“Like most things in skiing, this is about building up to it and being mentally strong. So get comfortable on steeps and maybe even try dropping a few smaller things. There’s lots of both in Jackson! If you think you’re going to do it, you probably will.

What’s out of control is what condition Corbet’s is in. In bad snow I usually stay clear of it as it’s just plain nasty; icy… a hard landing. But if you are only here for a short time you can’t be picky and go home having not done it, eh? So be positive, weight forward and stick to a plan.

I like to face into the cliff (to skier’s left), then airplane turn (so that you’re turning in the air to speed everything up). Get it right and it’ll look easy!”