Downhill racers use camber, gravity and conditions to create the most speed from the terrain ahead in a safe(ish) way. Copying them can liven up your pace

In downhill racing any mistake could mean serious injury, so reading the terrain correctly is crucial. What a racer looks for during course inspection you can look for too. First, think about how you will adapt your skiing to the physical shape of the hill: 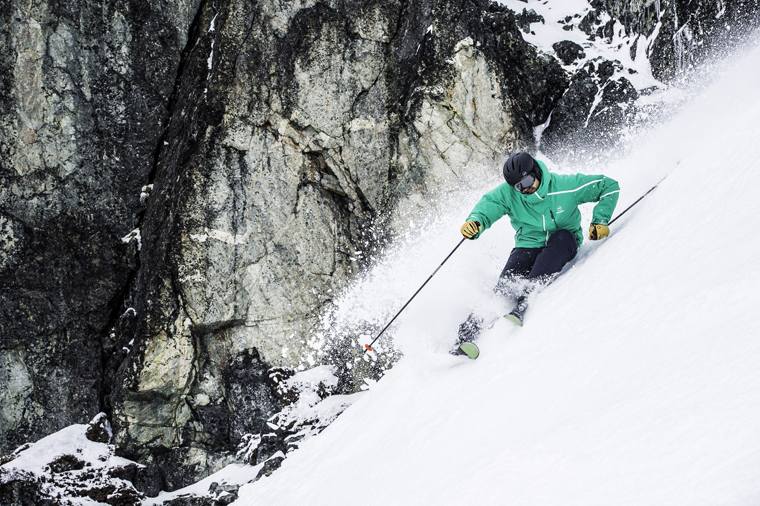 Use the mountain’s terrain to charge faster | Courtesy of Rossignol

Pre-empt changes in gradient by driving your hands forwards and down as you travel over the crest of a bump in order to keep contact with the ground. Coming onto a flatter section, channel your speed by letting the skis run freely. Your speed will only increase on steeper terrain, so don’t waste it by over-turning approaching flats.

Applying more force on the turn that makes you dive down the mountain, and going softly on the ‘up’ turn allows you to fight gravity as little as possible, avoiding a build-up of pressure which will slow you down.

Look for a ‘swimming ski’ sensation and try to stay off the edges. A really flat ski will wave around a little under your foot. This can be unnerving at first but it’s fast!

Reading the terrain is one thing. Better still, use it to your advantage: world-class skiers shape their turns to make the most of gravity. They apply as much force as possible to the ski in the first half of the turn. The second half is a release movement similar to skating, but keeping the feet on the ground. This allows you to start the next turn by moving off the inside ski. It’s a skill that requires practice, but work on it and you’ll create more power and speed around the mountain.

Next, look out for environmental factors:

A glance at the clouds can help you decide when best to time your run for speed. Thick cloud or the dreaded ‘flat light’ is disorientating as it makes it very hard to see the definition of the terrain.

When first practising skiing faster, pick a slope lined with trees or netting as the contrast makes it much easier to see the terrain.

Sometimes snow in the shadows is quicker; sometimes it’s the snow that has been in the sun that’s fastest. Consistency and speed of the snow change throughout the day and being able to gauge what lies ahead comes mainly from experience. (So get that next trip booked!)

Ice is fast but you have to be sure you can get your edges to grip by keeping your weight over the outside ski. Softer snow calls for softer movements and greater touch. Try not to edge too hard or make harsh moves – let the skis do the work for you. In new snow, following tracks is quicker than making your own.

In rough conditions, however, keeping the skis on the deck is the main thing as this will allow for more control. It is always quicker to have your skis on the ground than in the air!

Last but not least, if you’re skiing with other people, use slip-streaming to gain some speed (think Tour de France). Tuck in behind someone and you’ll soon be catching them up, then shoot by as the wind resistance is lowered!

More from our speed series: