Like many of us, my wife and I believe we will never ski as well as we’d like to – despite skiing in each of these last 36 of our 63 years.

We blame it on our late start. So when our children came along we resolved to introduce them to snow as early as possible.

Getting my family on skis

For our son this meant a walk around our snow-covered garden on plastic skis one day before his first birthday, followed one year later by a short run at Cairngorm skiing with him between my legs, and finally ski school in France as soon as he was three.

By the time we purchased our first Cairngorm season ticket he was aged five and had already experienced four weeks’ instruction at the Village des Enfants in Avoriaz. He had few problems skiing most of the ’Gorm’s runs alongside us.

Unsurprisingly, after only one week at ski school, our three-year-old daughter was not quite up to the same speed that winter of 1990-91.

Although she did manage to ski down gentler Coire Cas in a wide snowplough, she was only able to make turns in one direction. Unfortunately, after several days of our futile attempts at instruction and endless encouragement, she seemed ‘stuck’ and understandably apprehensive.

We had however just bought her first and only new set of K2 children’s skis that Christmas (every other pair thereafter were her brother’s cast-offs). 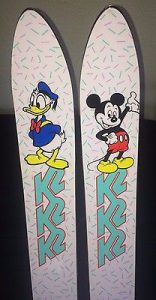 Fortunately, Walt Disney had a hand in their design, with Mickey Mouse on one top-sheet and Donald Duck on the other. Mickey was clearly the favoured character – or perhaps it was because he was on her dominant right foot that she could only make turns to the left.

It was then we had the lightbulb moment of switching the skis over and exhorting her to stand on the preferred Mickey, as she usually did. Eureka! Perfect right-turns followed. Soon afterwards she made her first descent of the signature White Lady run; just in time for her fourth birthday.

Although early instruction from their annual week in Avoriaz provided the sound base to their skiing, it was miles at Cairngorm every weekend (staying in our touring caravan), and subsequent race coaching by Cairngorm Ski Club’s great coaches and ex-national team racers, that led them both to Scottish Schools’ team selection and, for our son, Scottish and British Youth Alpine team selection.

Double University Blues followed for both, but had our daughter Cheryl not made the breakthrough that first winter, the subsequent seasons in Scotland and the family immersion in snowsports might never have followed. Thank you K2 and Walt Disney for all these years of fun.

P.S. The technique also worked for a succession of their young pals who came at weekends to try skiing.