God knows how many image submissions we’ve had over the last 10 years. But by my reckoning it’s well north of 250,000. Which breaks down as 50 regular photo contributors, on average sending us 300 to 400 shots per year, plus staff bits and pieces, product images, interview portraits… I could go on here!

Some of the images I would forget almost as soon as I’d seen them. But these are the cherries that somehow stayed with me, to such an extent that I know the skier, author, spot and story without even a glance. In turns they make me smile, swear, scratch my head in disbelief – but most of all really want to go skiing. 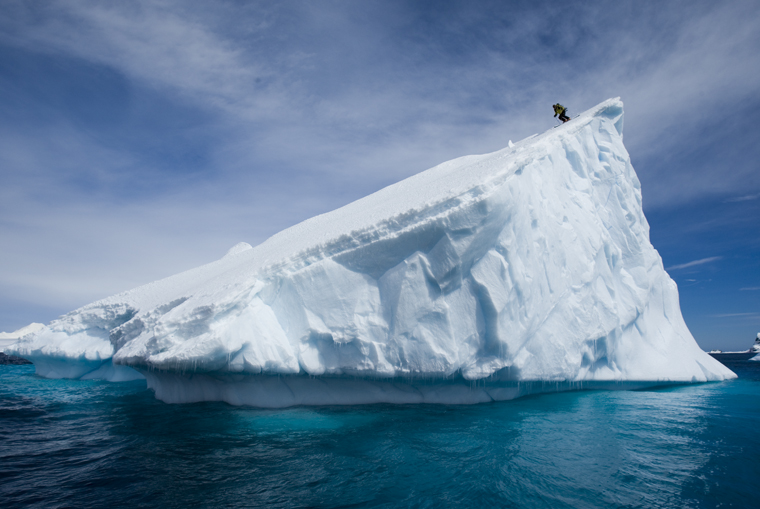 It’s naughty to have favourites when you’re on the desk sifting ski shots. Every submission should be judged on its own merits, as you never know where you’ll unearth a banger. But let’s just say AC’s seams are richer than most. He frequently sends in an absolutely cracking Alaska selection: no photographer is better at crazy spine shots (via helicopter and very long lens), and there are usually one or two mega expeditions too.

This one was to Antarctica; to me the shot stood out thanks to the perfect size of the iceberg and the ever-so-clear water. I’d not seen anything like it before, nor have I since. There was quite a story behind the image, what with the danger of the thing rolling/pitching (think of an ice cube in a glass of Coke) and Andrew McLean – widely considered America’s greatest living ski mountaineer – struggling just to get on the thing from the boat, never mind shred it, with the scale deceptive. 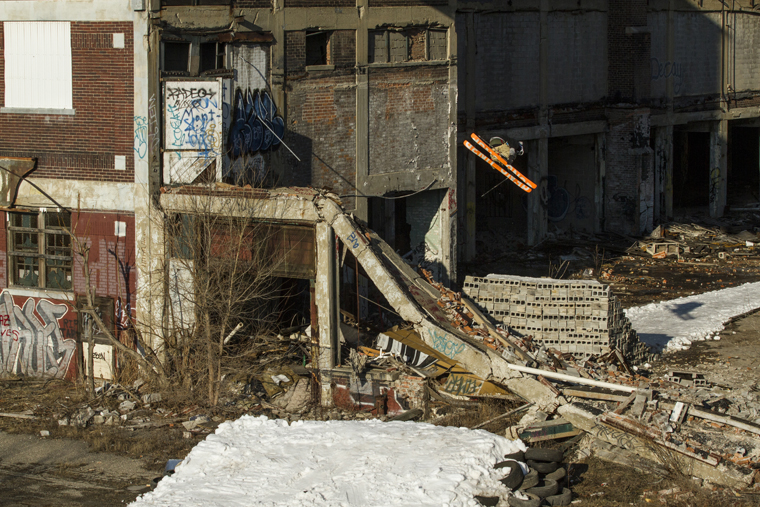 We don’t feature a great deal of urban in Fall-Line. But this was a rare exception as the story was so good, and unusual, with Karl Fostvedt (the skier in this image) and the Poor Boyz crew descending on the world’s largest abandoned factory, in Detroit. The hope was for some February snow, but rain rain rain meant they had to truck a load in (from the local ice-rink) and manage with just a narrow ribbon of white.

For me, that just makes the shot stronger, with such a contrast between the industrial decay and the winch-aided ski track. The scene is so perfectly lit in soft winter sunshine that photographer Tim Sorenson almost makes it beautiful. Behind the scenes, according to Crazy Karl (who’s something of a specialist when you need big air from miniscule amounts of snow, having been involved in Valhalla’s incredible rainforest ski sequence), was nothing like that, with various junkies and chancers intent on stealing anything of value during the two-day set-up/shoot. 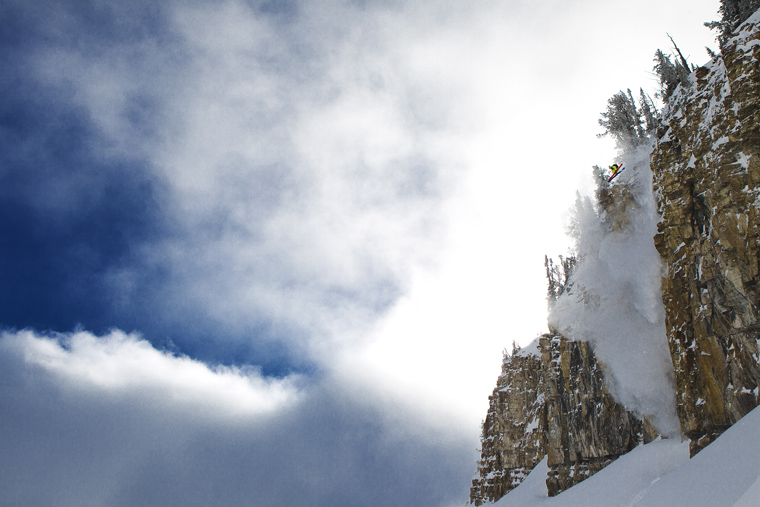 This is such a pure, classic image. The angle, the feature, what the skier is doing. But the scale of it gets me every time. It’s… nightmarishly huge. But Jamie Pierre somehow makes it look very laid back, and ‘oh what’s all the fuss about?’ It’s four years since his death in an avalanche (while snowboarding, ironically), and this photo makes me glad we can still remember him and raise a smile.

No other pro skier used to call the office to tell us about his fishing trips, or when asked what sponsors he wanted listing at the bottom of some interview, say something silly like “I enjoy PBR beer!” He really was a one-off. And to me anyway, just a little of his off-the-wall character comes through in his ski shots. In this case we’re talking, oh, at least a 100-foot huck in Jackson Hole sidecountry. And while we get plenty of submissions from this spot – Fat Bastard – none ever touch this for scale. I do like the ethereal, brooding cloud too, much more atmospheric than a bluebird day – nice one, Oskar. 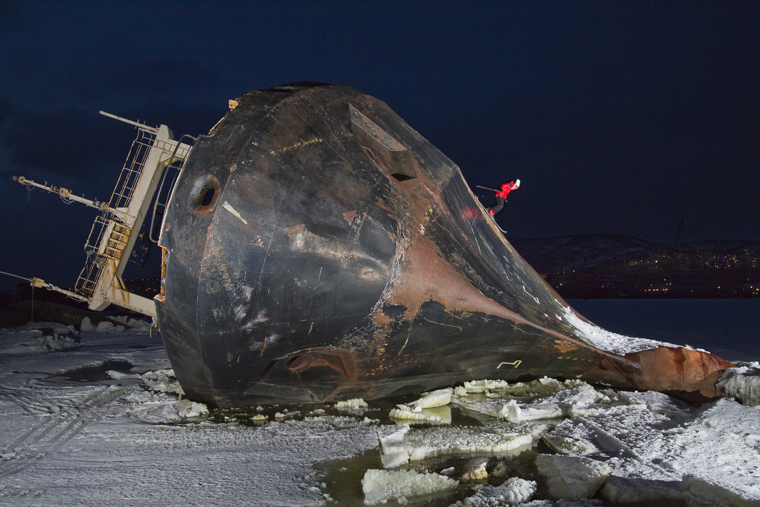 Crazy and so unusual, yet I remember at the time there was debate whether this should even run. I had no doubt, but art director Steve Herbert was much less keen due to the poor image quality and what we call ‘noise’ on the frame (photographer Tristan and skier Guerlain Chicherit were clearly in a race to get it done before the light totally went).

As a result, it’s no great shakes in technical terms (either skiing or photographic). But I just love the fact that Shu, as everyone calls him (thanks to his real name of Lebeschu being a right mouthful), saw potential where most of us would have simply spied a half-sunken Russian trawler. A big strength of the Frenchman’s is also knowing the talent to make these outlandish visions happen, in this case a former four-time Freeride World Tour champ. The fact no one in the office had ever heard of Kamchatka, so far east in the former USSR that it’s almost above Hokkaido, only added to the intrigue. 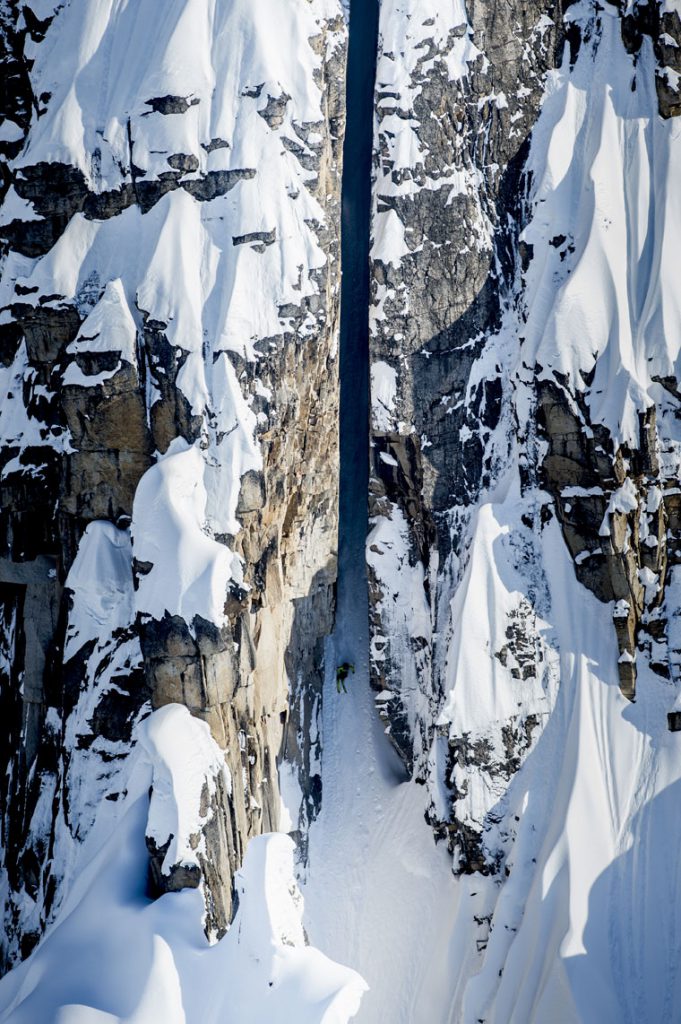 This image gave me sleepless nights. And not for the reasons you may imagine. We saw it early, but decided to hold until the Backcountry issue (our fourth magazine of the season), which was not published until late December. I was terrified that other ski titles, or worse still the mainsteam media, would seize on it before then.

Thankfully – God knows how – it got missed, or ignored. FL was first to show it in the UK, and as soon as we went on sale the whole thing seemed to grow and grow (including the row between Cody Townsend, pictured here, and Travis Rice about who rode it first).

We can’t take credit for the way it went huge, but it was very nice timing. As to the image, it has it all. Amazing couloir that looks as if it’s been created with a laser it’s so tight and precise; entry that requires shimmying over a 500ft drop; a 60° face that means speeds of up to 60mph by the exit, as the chute’s sheer rock walls are too tight for anything but straight-lining. Incredible, even for Alaska.

Taken from our Photo Annual, out now