It’s the ultimate ski city with resorts visible in every direction. Here are our favourites…

Name all the ski cities you know. OK, now name all those with 30+ ski areas within 50 minutes’ drive and a lift out of the city centre. At this point your list is reducing down to, let’s see… Innsbruck.

The city is tightly woven, enjoyable, quirky and classical, and full of students bolstering the vibrant feel of the place. Nearby villages all seem to have a set of ski lifts, decent hotels and buses to spin you round to the next resort. It’s very possible to ski almost every resort without hiring a car, but we’d suggest making a ski safari of it and book into, say, three different places including the city centre.

As far as we can tell, the only downside to the place is that it doesn’t have enough flights going there. The flying is a tad tricky, and pilots have to have a special qualification and it’s an added complication and expense. Something to do with all those mountains…

Why go? Varied pistes, good value, super-accessible, outstanding day touring opportunities. Kühtai is probably the most complete of the Innsbruck region resorts, and it’s one of the highest too, with the ski village situated at 2020m. The Graf Ferdinand House does excellent on-piste grub, or you could roll 400 metres downhill to the terrace of the Alpenrose Hotel and watch the halfpipe and park antics. 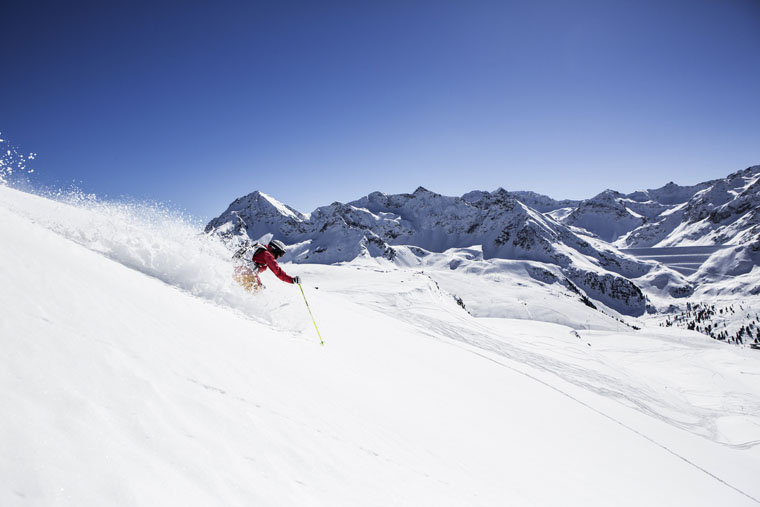 A small resort with a healthy dose of sidecountry | Daniel Zangerl

The other side of the hill is sunny and sports the longest run around, if you string Piste 1 into Piste 5. The runs off the Hochalterbahn on the sunny side can be extended to skier’s left and run down to the road, which would give you a short walk back up to the first lift (the Gaiskogellift) and then back into the system. There is essentially endless off-piste in this area.

Don’t miss: That sidecountry valley run, plus a quick frightener through the halfpipe – even if you just ski down the middle…

Why go? Nordkette has intoxicatingly good steep terrain: take the funicular from the city centre and 30 minutes later you’ll be staring down the twin gun barrels of the avalanche protected couloirs Karinne and Seilbahnrinne. A short traverse left accesses the Diretissima, a big open face with plenty of room to slash and huck. 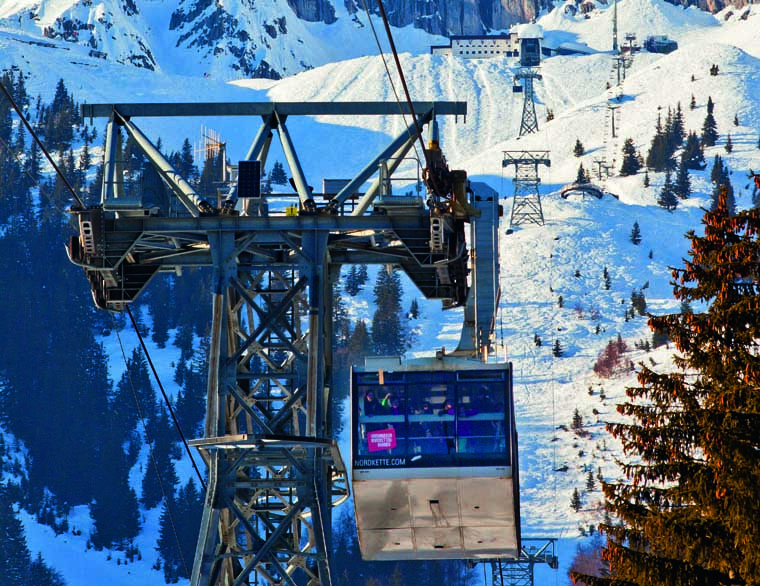 From city to mountains in a matter of minutes | Christof Lackner

Nordkette is on the northern side of Innsbruck, and during a good nordstau (northerly) can get 20-30% more snow than nearby resorts, meaning lots of powder. The valley runs maintain a good gradient through the forests too, with hundreds of secret stashes to discover, while the park boasts a halfpipe and kickers overlooking the city below.

Don’t miss: Skiing top to bottom: from Hafelekar (2256m) the Seilbahnrinne couloir gets the heart pumping and leads to the mellow powder fields of Langes Tal, before dropping down through playful trees to Hungerburg (860m); there aren’t many places that can match such variety and quality of terrain in just one descent.

Why go? Muttereralm is not the place for big lines or fresh powder, but easily reached by bus, tram or car from Innsbruck, it’s a great place to bring the brood. The resort is built around two long runs (served by equally long gondolas) the steeper of which has a vertical drop of over 1000m. 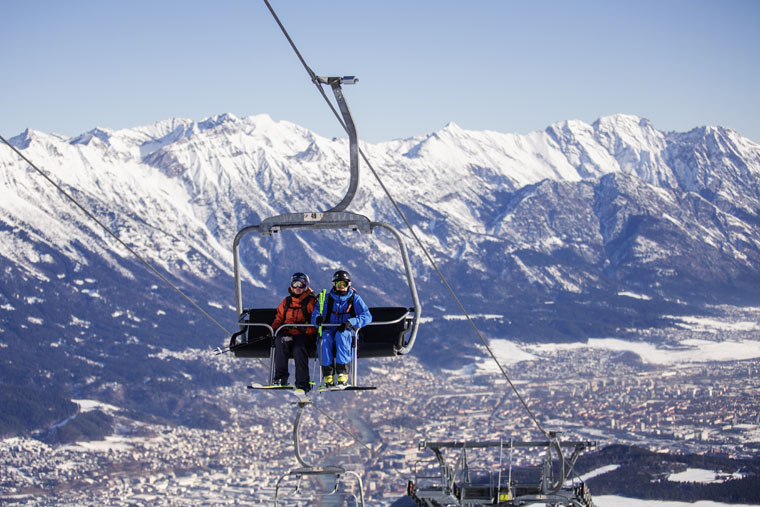 There are several nursery slopes and a top-notch ski school, plus the long blue run is perfect for intermediates to build their confidence on. Connected to bigger, bolder, Axamer Lizum in one direction, it’s also worth skiing down to for the final hours of the day; if you’re travelling by bus, it’ll cut your journey time back to Innsbruck in half.

Don’t miss: The park. Launched last year, it starts with a few gentle kickers and boxes aimed at young ‘uns (or, in our case, the weak-kneed), before progressing into a fully-fledged forest run with rails and jumps.

Why go? If the snow is pounding down then Schlick 2000 is the spot to shred. The one gondola lifts you from Stubai valley to Kreuzjoch at 2136m, revealing a hidden bowl that shelters you from howling winds, yet holds the snow far better than most resorts of its height. 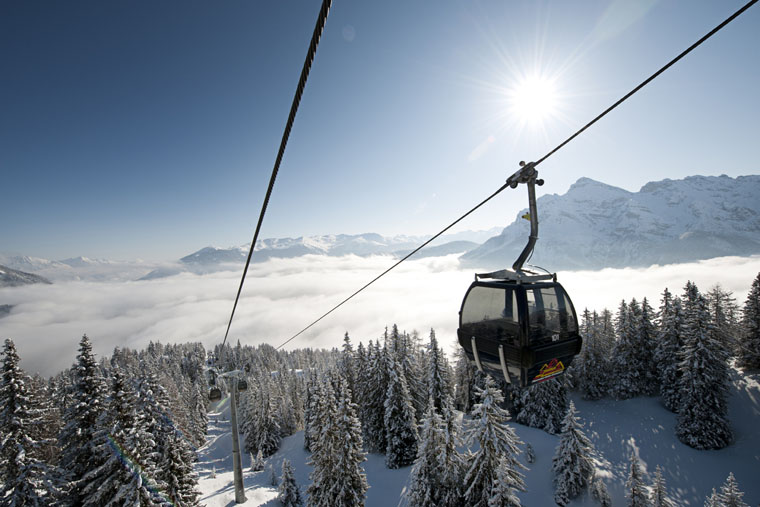 The trees, we reckon, are the best in the Innsbruck area; easily accessed from the lifts and just the right density to challenge your reaction speeds without getting a branch to the face. And when the sun does shine, the jagged limestone peaks of the Kalkkögel make the perfect backdrop for your hero shots.

Don’t miss: Skiing from Sennjoch (2240m) down the valley (1000m). The main route might be marked blue, but don’t let that fool you. Head into the trees on either side for fun and reflex-testings runs through the trees, riddled with twists and jumps.

Why go? Stubai is Innsbruck’s snow-covered back-up plan. Typically open from September through to June, it’s the home of pre- and post-season freshies with 43km of piste, 19km of ski routes and acres of off-piste to play on (though be wary of crevasses). 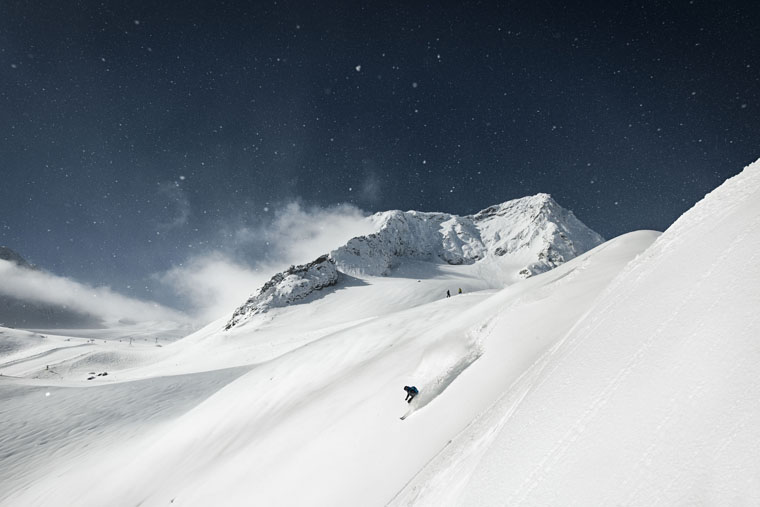 It’s also a blessing in bad-snow years, though expect it to get busy at weekends and during peak weeks. With most of its skiing above 2500m, it’s not a fun place to be during a blizzard, but check the webcams before you rule it out: it’s often sitting above the clouds in bright sunshine.

Don’t miss: Star spotting! The Stubai Zoo park draws in big-named skiers and snowboarders from all over the world, especially in the early season. So don’t be surprised if you find yourself sharing a T-bar with Jamie Nicholls or end up with one of Henrik Harlaut’s dreadlocks dangling into your goulash soup in the restaurant queue…

Taken from our Explore Europe issue, out now