Its top half is a five-man cabin smaller than a phone box, leading to guide-only steeps, while the lower part opens up a gigantic freeride playground

If, like me, you admire a nice bit of engineering, without really understanding it, have a gawp at the clever machinery of the Galzig lift in St Anton am Arlberg as you shuffle towards the gondola that takes you into the awesome terrain of one of Austria’s finest resorts.

Galzig mountain opens up a world of freeriding options, not least our chosen lift, Valluga I, and its ‘with guide only’ vertiginous extension called, crazily, Valluga II, which tops out at 2811m. 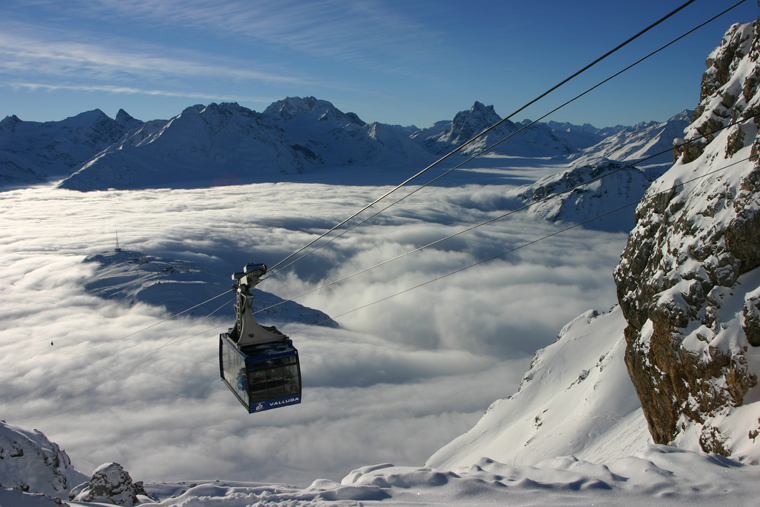 St Anton is well-known for its variety of terrain – 94 lifts, 340km of piste, yadda-yadda… but it also has a knack of giving you fine riding, even when snow and viz are not so fine.

Valluga on a bluebird day is hard to beat and its bottom station is but a short stair climb as you exit Galzig. With a ‘where eagles dare’ lack of visible support, it whisks you up to Vallugagrat at 2650m. Have a quick heisse Schokolade in the restaurant if you must, but if you’ve a guide you’ll be taking the Valluga II five-man cable car on up to the observation platform at 2811m. There, the first thing to observe is that while 2811m doesn’t look that high on paper, there’s nothing higher in the vicinity and the only way – in every direction – is down, steeply.

Valluga Nord is the ‘classic’ route. Heeding your guide’s thoughtful direction, put in some tight turns down the far left of the steep pitch, then traverse right across a decidedly no-fall zone. Once at the col between the Valluga and Roggsptize summits, things open out into multiple rolling powder fields all the way to Zürs.

Gnarlier is the Valluga Bridge Couloir route, involving ladders and then ducking troll-like under a bridge to access a couloir a mere 2m wide at the top. It eventually joins the wide-open runs to Zürs, where you can start to unclench parts you didn’t realise were clenched.

Not that Valluga forces you to hire a guide to have some fun. Yes, Valluga II is exposed and served by a lift smaller than a telephone box. But when high winds, poor visibility or excessive snow make Valluga II a non-starter, Valluga I comes into its own.

Any freerider knows that more often than not you make your own ‘classic’ runs, and most don’t appear on some Alpine bucket list. Luck and timing are crucial, and Valluga I puts you in a position to make your own luck.

At the top of Valluga I, head back and down a short pitch (red 19) that runs to the T-bar below and to the east of the Valluga peak. From there, traverse left on the dotted red itinerary route 16 below the Mattunjoch and onto the wide open Mattun valley that brings you back to the Zammermoos chair, which takes you back above the Valluga I station.

A steeper option is to pole it forward from the T-bar and head down route 15, the Schindler Kar. If the snow is good, come skier’s right around and below the Schindler Spitz and drop into some of the couloirs and red route 15a into Steißbachtal.

A word of caution: this isn’t the best way to hammer homewards. Your run out from the face brings you into ‘Happy Valley’, or blue 4, where everyone funnels into a narrowing gun barrel, with snowploughing novices turning like supertankers in the middle, and speedsters taking the high line along the edge. Not everyone likes human slaloms and split-second judgment calls at the end of long day’s riding.

From the T-bar below Valluga I you can also head west and join those screaming down past the top of the Schindlergrat chair. Red 14 can get busy, but if the snow’s good and your left leg is strong, take an epic traverse to the right and find some side-country lines, rejoining the piste in time to hang a left back to the Tanzboden T-bar, which takes you back to Valluga I again.

When it’s time to call it a day, and you’ve negotiated Happy Valley or wisely worked out another way down, you enter the world of St Anton après-ski.

This starts early for some at haunts like the Mooserwirt, while in town there’s an Aussie singing Garfunkel in the Piccadilly bar and a chalet load more of trendy and traditional bars. FL