We’re all guilty of judging a book by its cover at times, but when it comes to Crêtes drag in La Plagne, don’t let the piste map fool you – it is a goldmine of powdery chutes and spines if you know where to go. This is some of Europe’s best off-piste.

La Plagne is renowned as a ski intermediate’s paradise. Miles and miles of cruisey blues and reds. Ideal to keep Sid and Doris Bonkers from Basildon or Brussels busy for their biannual week skiing, but precious little of interest to the hardcore skier, right?

Wrong it turns out, as I discovered for myself over a couple of days in March visiting a mate now based there.

I met his initial claim that La Plagne was a legit freeride paradise with scepticism, which became outright derision and contempt when he pointed triumphantly at the piste map at the lift he considered to be the key that unlocks La Plagne’s crown jewels. I was prepared to humour him had he been pointing at the left edge of the piste map in the direction of Bellecôte, about whose mighty north face I’d heard promising murmurs over the years. But instead his pen was hovering on the opposite side of the A3 map over a lift so small that the lid of his pen obscured its entirety. 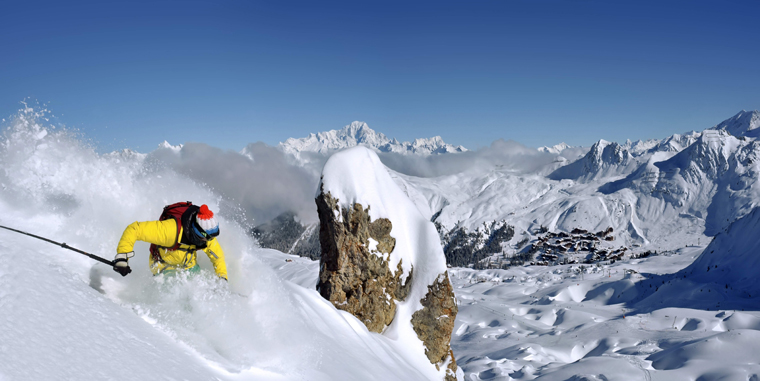 Crêtes. A drag lift not much more than 500m in length, it only rises 60m or so from start to finish. Something you’d expect to find on a nursery slope or inside a snowdome then. But to my amazement, this exceedingly inconspicuous-looking affair did indeed open a Pandora’s box of fabulous opportunities.

That I’d timed my visit impeccably with regard to snow conditions certainly helped. It’d been snowing on and off for several days prior to my arrival, which coincided with two picture-perfect bluebird days. First on the menu were “a couple of swift laps of the short, sharp, rolling reds and blues to the bottom of the Becoin chair”. Perfect warmer-uppers while we waited for Crêtes, just above Becoin, to open. This is a sleepy corner of the Paradiski area – not on the way to anywhere – which seemed to attract very little passing trade, on-piste or off.

The pisteurs soon opened the drag with a minimum of ceremony and up we went. Groomed options include the swooping Gavotte red and Grande Pente black pistes towards Plagne Centre or the Etroits black that plunges down the picturesque valley to the right.

But with the promise of powder we had loftier ambitions and began with a 40-minute bootpack to looker’s left up the ridge to the 2,594m summit of Becoin, a highly visible spiny sentinel standing guard over the Plagne Centre and Aime La Plagne sectors.

Here was as close an approximation of a Haines-style Alaskan spine wall as I’d ever seen in Europe, hiding in plain sight in the midst of one of the world’s most visited ‘intermediate’ ski resorts. What the F?! And where the F was everyone? If this was Tignes, Chamonix or Verbier it would be a dog show by now. There was 30cm of pow, a cloudless sky and not another soul interested in this white goldmine of spines and chutes! Don’t mind if I do said I, and we managed three unchallenged hero laps, pretending we were in the movies all the while –

before our legs were shot, our lungs exhausted and our goggle-tans strong. 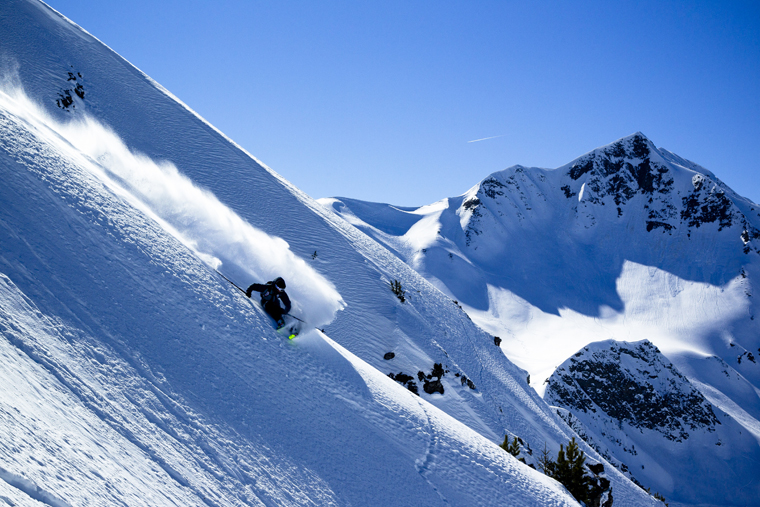 The following day we ticked off a face that was begging to be defaced but, to my amazement, was still untouched. This was Mont Jovet, an equally picturesque peak reached by way of an obvious 70-minute approach on skins, skirting the huge bowl to lookers’ right of the Crêtes arrival point. \

We passed plenty of fun-looking, north-facing mini-golf terrain on our way up. The face we’d spotted across the bowl bang opposite the lift, and duly deflowered, was Mont Jovet’s north-east face, which was a series of plunging pitches feeding back onto the black Etroits piste. This quiet valley eventually spits you out at the glorious terrace of the Chalet de La Roche at the converging ends of the Cornegidouille blue and the Olympic bobsleigh track in the hamlet of La Roche. A terrific spot to reward yourself for a morning’s exertion pillaging La Plagne’s crown jewels with a cold beer and a pizza.

Don’t judge a book by its cover, so the saying goes. I spent my lunch trying in vain to think of a fitting ski adaption. How many other areas are as misunderstood as La Plagne’s, I wondered. Maybe Courchevel has opened a string of Poundland stores and didn’t think to tell anyone? Perhaps La Grave is in fact a top-secret beginner ski facility, its freeride reputation all an elaborate cover-up?

More on the most misunderstood ski area in Europe:

The secret (powdery) side to La Plagne

Battle of the ski resort: Paradiski