January 22nd was a monumental day in British ski history. Four months on and we’re still celebrating as first-ever British ski World Cup winner Dave Ryding is honoured in Kitzbühel with a gondola named after him.

“This is undoubtedly the best year of my life,” says Dave Ryding looking back at just the first five months of 2022. Not only did he bring it home to the UK after a long 85 years, but he’s also just married and is set to become a father.

After 13 years on the circuit, Ryding claimed victory in slalom at the Hahnenkamm Races, arguably the most prestigious of the FIS Alpine Ski World Cup. It’s the first gold in alpine skiing for Great Britain since the World Cup was established in ’67. The last British win on the Hahnenkamm was in 1937 with Evelyn Pinching clinching the women’s downhill and before that during its very first races in 1931 (Gordon Cleaver).

As is custom, Ryding’s name has been added to the list of legends that have triumphed on the Hahnenkamm as he goes down in Kitzbühel history. Fans, locals, visitors can now travel up the Hahnenkamm lift in his winning gondola to top station at 1,670 meters above sea level.

“Since the beginning of the Hahnenkamm races, Kitzbühel and the United Kingdom have been connected in a special way,” says MD Viktoria Veider-Walser of Kitzbühel Tourism. “The first Hahnenkamm World Cup victory by Dave Ryding strengthens this bond even further, which we are very happy about! The British market has always been of great importance to Kitzbühel Tourism, which is why we are celebrating this victory in particular.”

From dry ski slopes to a World Cup win, it’s been a long journey for Dave Ryding:

You know, I’m 35 now, but I never stopped believing, I never stopped trying, and to bring the first victory for Great Britain in a World Cup, in Kitzbuhel, I mean, I don’t know if dreams are made better.

Rarely has a victory by an athlete received such undivided approval among ski fans over the world. It seemed a very British celebration on 27th May with fish & chips at the Hahnenkamm-Starthaus and an afterparty for all fans in Kitzbühel’s The London Pub.

Watch his winning run below:

DAVE RYDING – HOW TO SKI SUPER-FAST 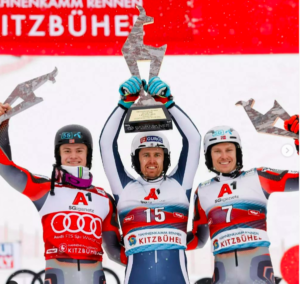 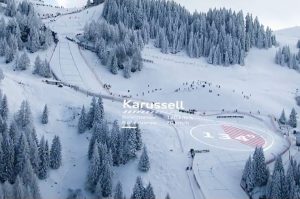