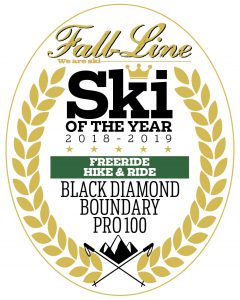 The tech specs of the all-new Black Diamond Boundary Pro 100 and the limited-edition colour option may give you a clue as to this ski’s preferred terrain. Based on the Boundary 100 which has been around for several years, the Pro has increased and beefed up torsional rigidity and really does feel much more powerful underfoot.

We loved the Black Diamond Boundary Pro 107 last year, and dropping the width a touch makes it more appealing to the growing mid-fat hike’n’ride crew who want improved piste performance for true versatility. With traditional camber underfoot and a medium rockered tip and tail these really do grip like limpets on the piste, the sidewall damping system helping to keep chatter to a minimum.

“A properly versatile ski – and the pick of the very good Boundary series for me. These give loads of energy off-piste and great on-piste reactions for a freeride ski. They’re a pretty beefy build for a Black Diamond, who love their carbon, but this proves they know how to lay up a punchy number. I’d class it as hike and ride rather than any sort of touring, so fit a sturdy binding to make the most of it.”

Ian Davis stepped away from hammering piste skis to give the Pro 100 a few runs:

“Exceptionally versatile, light and manoeuvrable;a great ski if you want something for short tours as well for all over the mountain. A one-stop shop.”

“Partner this with Salomon’s new Switch binding and you’ll have a formidable tool to take on the whole mountain. OK, if you want even better off-piste performance go for the Pro 107, but the 100 doesn’t lose much in terms of freeride fun and on piste it really lets you crank those turns.”