High, snowy and party-filled Ischgl battles it out in our Ski Resort of the Year awards

There are plenty of transfer options from Innsbruck (1hr 15m), though it can work out cheaper to hire a car. If you’re driving from the UK, expect it to take at least 10 hours from Calais, longer if you want to avoid French toll roads.

Sense of scale and epicness 6/10

On a clear day you can see the lofty Swiss/Austrian border peak of Fluchthorn, and (if you really squint) beyond to Italy. The skiing goes up to 2864m, impressively high for Austria, but nothing to shout about compared to the high French/Italian/Swiss beasts.

Variety and quality of the pistes 9/10

It’s the quality of the lift system and the terrain it supports that sets Ischgl apart. They’ve invested some serious money into making it one of the world’s best, with high-speed chairlifts on every inch of the mountain. The 238km of piste offers ample cruising terrain and freeride offerings. Tree runs are limited, but there’s a sprinkling above the village for low-vis days.

It might not have the reputation of nearby St Anton, but the terrain is just as good and there’s far less people fighting for freshies here. As well as plenty of goodies between the pistes and short bootpacks, there’s also a dedicated freeride area opening up 700 vertical metres of powder-filled terrain. 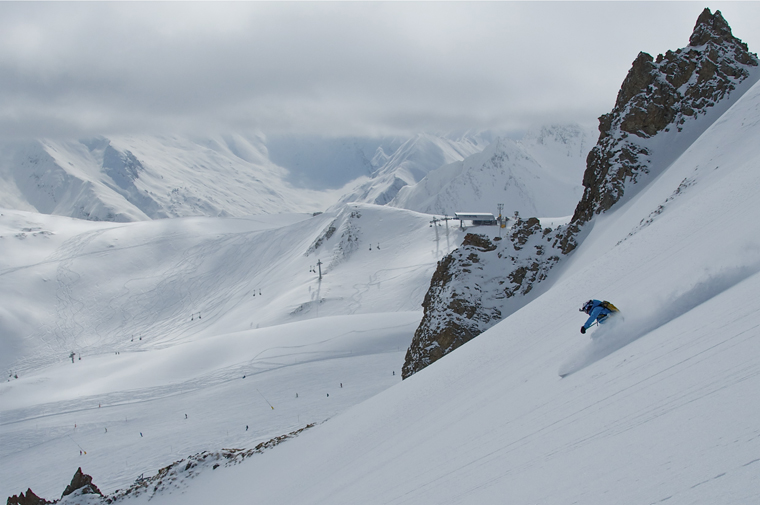 The temptation to explore the whole area will stop you from lapping one run, at least for a day or two. But once you’ve found your way around there’s plenty of lifts worth riding a few times, notably Palinkopf, with its challenging network of blacks.

Pricey for Austria, especially if you cross into the Swiss part by mistake. That being said, Schmuggleralm in the Swiss village of Samnuan is well worth splurging on. On the Austrian side, many of the restaurants are a bit samey, but self-catering Pardorama is a good choice for the panoramic views.

Table dancing and half-naked girls are not to everyone’s taste, but I challenge you to walk down the main street at 5pm and not get drawn in by the pumping music and rowdy German crowds. It’s like the Folie Douce took over an entire town.

A good base for exploring the rest of the Paznaun Valley. Kappl and See are especially worth visiting, with dedicated freeride areas and near-empty slopes. Touring opportunities are ample, with the classic Silvretta ski tour starting in Ischgl.

Beginners have to ride up to the mid-mountain for the nursery slopes, which isn’t ideal. Better to stay up the valley in Galtür if you’re with nippers, home to many family-friendly hotels and away from the debauchery of Ischgl’s bars. There’s a good kindergarten at the base station, which takes kids from age two.