It’s the small-town resort that’s played host to a whole plethora of freestyle events, including The BRITS (until this year) and the Burton European Open. The park is a rider’s paradise of gargantuan proportions, packed with features including a 140m monster pipe and 20-odd rails to grind your way down on. Oh, and then there’s the Freestyle Academy – the first of its kind in Europe – an indoor playground of trampolines, kickers and foam pits, used by beginners and pros alike.

Based on all this, it’s tempting to write Laax off as a Mecca for freestylers, best stayed away from if you don’t own at least one pair of twin-tips. But if you take into account the 220km of pistes, which vary from wide sunny bowls to winding leafy runs and some nice steep pitches, then it’s clear there’s more to Laax than parks and posing. Two new chairs this season have added to the already extensive freeride options. Just make sure you get up early if you want to nab the first tracks.

Yep, Laax and little brother Flims have a lot to be proud of. They’ve transformed what was an understated local gem into an internationally-renowned mega-resort attracting all, from big-name skiers to families, to their turf. Purpose-built, Laax Murtschetg has shifted the focus of the area – especially since opening the uber-trendy Rocksresort, and the not-so-aptly-but-amusingly-named Crap Bar. If you prefer a more local feel, stay down in Flims, which has its own links to the hills.

All in all, this is a resort easy to fall in love with whether you get your kicks from kickers or not. Just ask local ski instructor Ben Scott.

FOR A DAY AWAY FROM THE PISTES

There’s so much freeride terrain to be explored. The new Lavadinas chair has opened new zones both sides of the ridge, offering up lots of challenging but fun terrain. It almost seems as though they built it just for freeride. When the snow’s not so good I’ll ride the park at Curnius – they’ve spent a lot of time and effort on this and it’s packed with features and natural jibs that work for all abilities.

Visiting the Freestyle Academy (freestyleacademy.laax.com). It was built a few years ago and is the only freestyle indoor training facility in Europe. Everyone wanting to train in the hall (even world-class athletes) have to take a mandatory introduction course lasting from one to two-and-a-half hours. Whatever your ability, you’ll develop your park skills and improve your riding.

If you want to take it easy in the morning, head up high to La Siala where the snow is always better. There’s plenty of options up there, but give the number 10 down to Nagens a blast. From there you can carry on all the way down to Flims on the number 18. It’s roughly 7km long and dotted with hits and jumps – a great way to find your ski legs.

Everywhere, so long as you get there first! Like any resort on a powder day, it’s a bit of a scramble for first tracks, but there’s always snow to be found. Cassons is a good bet, but they usually close it off immediately after a dump until it’s safe. The Flims side of the resort tends to get missed because everyone heads up high. Of course there are a few stashes that only the locals know about, but I’m afraid I’ll have to keep it that way… 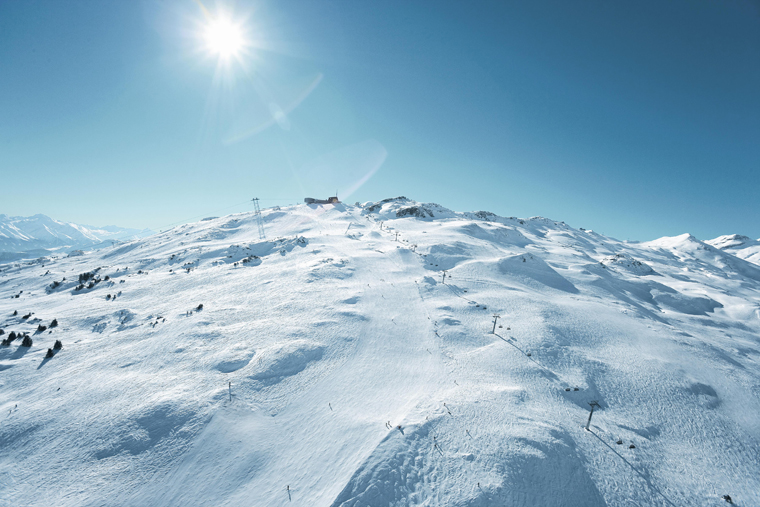 THE BIGGEST MISCONCEPTION ABOUT LAAX…

…is that it’s just full of freestylers decked out in all the gear. Yes, the park is pretty big now but, except for the Spring Sessions (a massive, end of season ‘let’s get drunk and ride park’ event in mid-April), it doesn’t get too busy, and actually Laax has got a really mellow vibe with a great mix of everything. Most of the time there’s racing going on as well as freeride and family skiing.

TELL US SOMETHING WE DON’T KNOW ABOUT LAAX

There are three cafes that make exceptionally good coffee: Piazza in Laax Muschetg, Cafe NoName at Crap Sogn Gion, and the place where you will find me every morning, Borderworld Cafe. That guy knows how to make a cracking cup of coffee.

Curnius (+41 81 927 9930), below Crap Sogn Gion, is one of the best. It serves hearty mountain food like rösti and schnitzel. If you’re looking for something cheap you’ll struggle (this is Switzerland after all), but some of the self-service joints will do good dishes for around CHF20 (£13.50).

FOR CHEAP EATS IN TOWN

Head to Nooba (nooba.ch) in the Rockresort. It does good, reasonably-priced, Thai curries, noodles and stir-fries. Or head to Burgers (+41 81 927 9599) which, you guessed it, serves burgers  – and very good ones too.

FOR A SLAP-UP MEAL

Startgels (startgels.ch). No question about it. You have to take a chairlift up to it but it’s well worth the journey: mountain views, gemütlich feel and mind-blowingly good local wines. The food is really special too; cauldrons of creamy polenta and grilled meats are cooked on a roaring open fire. To finish the night off, you can sled back down to the resort.

FOR AN APRÈS-SKI TIPPLE

Lanargs is the place to be, especially on Fridays. The party gets going around 3.30pm, with cringey-but-great après music and table-stomping aplenty. We usually share pitchers of beer, but others go for Jägertee or glühwein. Or, head to Rock Bar at Crap Sogn Gion and watch the sun go down from a deckchair.

Rider’s Palace has some mega parties and attracts big-name DJs. For something a bit different go there on a Thursday – they hold a big relay ping-pong tournament which loads of people gather round for, including local pro-snowboarder Nicholas Müller.

Ski area: 225km of pistes, including the connected resorts of Flims and Falera.