Nobody knows Colorado’s 13ers and 14ers as well as Christy Mahon and her buddies. Last spring she became the first woman to hike and ski the state’s 100 highest peaks, together with Chris Davenport and her husband, Ted

We always had a list of peaks going on, and went wherever the conditions were best. It was easier when we had a whole list in front of us, but it got much harder when we had just three or four peaks left, because we had to wait for those peaks to be in the best condition at the right time. Once we had decided where we were going, the day rolled out like any of our usual ski adventures… 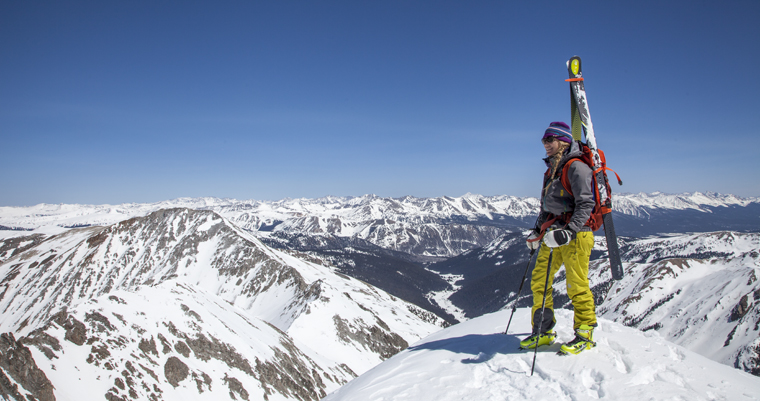 I work full time, so we’ll often get in the car on Friday night at 5pm and drive to another Colorado mountain town. One of my favourites is Ouray, which they call the ‘Switzerland of America’, an amazing community nestled in a vast valley of mountains with colourful blue and purple roofs. The town is at the start of the San Juans, and it takes three hours to get there from Aspen, where we live.

We’ll arrive and set up camp – in Ouray we pitch at Angel Campground, which is used by the more experienced ice climbers. We’ll pitch a tent – me and Ted, and another friend, maybe Chris Davenport or Joey Giampaolo, who is the trails manager for Aspen Mountain.

Ted and I do a lot of skiing together, just the two of us, but it’s fun to have a third person along and a lot safer if something happens – someone can go for help, someone can stay.

We’ll get in our sleeping bags and try to get as much sleep as we can before waking up around 5.30am – or maybe as early as 3.45am if the weather is good – because for capturing the sunny and east-facing peaks in springtime we need to be skiing around 7 or 8am.

Spring is the best time for us in Colorado, as the spring snow sticks to the mountains. In the winter it’s lighter and the wind blows it off the top of the peaks, so the avalanche danger is higher. For big objectives, like summiting the 14ers and 13ers, April and May are the better months. It’s sometimes hard – you want to go out in January but you can’t.

I train hard for my weekends. I work as development director of ACES [Aspen Centre for Environmental Studies], and in winter I often get up at 6am to skin up Aspen Mountain, get back, shower, get to work, work until 1pm, take a couple of runs during my lunch hour, work until six, catch a yoga class, come home, make dinner and hey presto it’s 10.30pm.

It takes a lot more muscle memory and practice to stay on form than when I was younger. We’ll try to ice climb during winter to get comfortable on steep slopes with crampons and ice axes. I also do weight training and cross training – I’ve had to incorporate yoga and strength training for cross-country ski racing.

I work with a bunch of donors, partners and members on different events, trying to find ways to connect people to our organisation. I’m in the office a lot but I get a chance to go out to the nature reserve with visitors. I always take the time to go out and have a moment with nature – five or 10 minutes can make a huge difference. Being able to combine my passion for the backcountry with my profession and work to protect the places that I love so much makes me feel good about working 40-50 hours a week, and knowing I’m working to protect the places that give me so much pleasure.

Before we set out to summit a peak on a Saturday morning we’ll have oatmeal with blueberries, granola and coffee on a little jet-boil. We’ll have been planning the route and weather all week, looking at photos if we can find them, or print photos if we have them from other summits. We’ll also read guidebooks. We might have to walk or skin for miles before getting to the trail junction at the base of the peak. You always have to keep an open mind about what lies ahead, know it’s going to be a long day and deal with whatever’s coming your way.

These peaks don’t necessarily have trails, and might be hard to climb during the summer too. We might climb for about 2,000ft up to a saddle, using skins and ski crampons to help if it’s icy, particularly on south-facing peaks. Eventually it usually gets to a point that we need boot crampons and an ice axe.

We’ll go up a couloir, and this is the point where I feel utter humility. It’s important to have this self-awareness – you never feel completely ‘on top of it’ and are always at the mercy of the mountain. You need certain skills for these adventures and challenges to be successful, and it’s hard. I’ve been doing this for 15 years and it’s still so humbling. Your adrenalin is going, you get to the summit and feel this amazing sense of achievement – you achieve something externally by summiting a mountain, but you also achieve something inside.

Getting to the top of a peak is such a metaphor. At the same time I’m working through those unstructured places deep within myself. It hurts sometimes; you feel you should be better. It’s always a struggle: I never think, ‘Oh, that was easy’, and the struggle is part of that, an instrument to building character and commitment. You don’t necessarily have to be the best, you just have to do your best. We do our hardest to plan things and be really aware of the conditions, but I think a lot about things going wrong.

While we’re climbing, I snack on salty things – roasted sunflower seeds are my go-to, they’re easier to digest than cashews and almonds, which I also carry, along with some salami or sausage with crackers; I struggle with all the energy bars, goos and chews you can buy these days – they’re all really sweet. This winter I carried my own homemade sports drink of tea with agave.

My love of ski mountaineering has grown since I moved to Aspen 17 years ago and discovered this whole new world. People don’t push themselves like that in Denver. People in Aspen have made a conscious decision to live their life, getting out to explore the backcountry where we live and feel alive. First I got hooked on skinning, then going to huts, then hiking the 14ers, then skiing the 14ers… it kind of just builds!

When we get to the summit, we’ll ski off as carefully as possible – that’s the best part – and head back to the car. We might have been gone seven or eight hours, or maybe 12. We always have drinks and salty potato chips in the car as a treat to eat as we drive into town and find a hot tub, dinner and go to bed early. 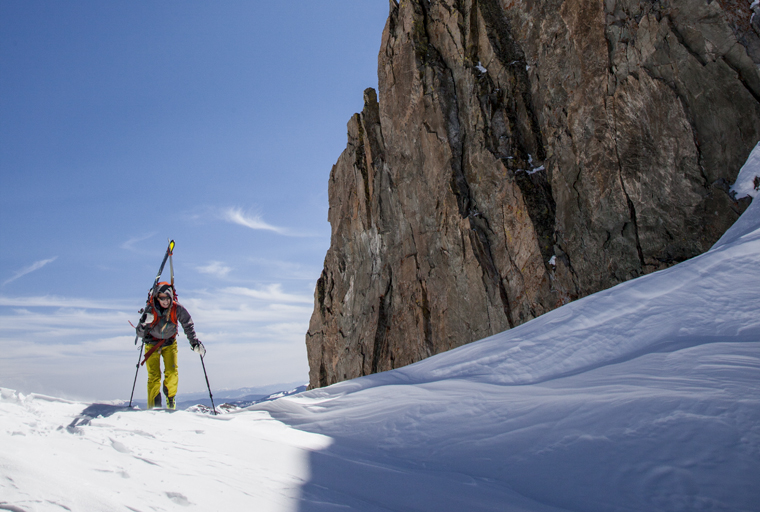 We started the Centennial project in 2012. We’d all skied all 53 of the 14ers years before, so it built on that project. It’s brilliant to build on projects. I think women bring a really interesting and different dynamic to the group. It’s something that everybody appreciates – I might ask different questions, present another option and look at things differently to men. I think as women we underestimate what we bring to the table, and it’s awesome to have partners who respect and appreciate that. It’s hard to put your finger on exactly what that is – just a different perspective.

On Sunday night we’ll usually stop somewhere fun – Ouray has a place called Mouse’s Chocolates with delicious scrap cookies made with everything in their shop, and we’ll get a coffee or shake to get us through the drive home, then we’ll get home late, unpack, get ourselves ready for the next day of work in the morning.

It’s a big weekend but instead of being tiring it’s really invigorating, and I can go back to work on Monday and say, ‘OK, I don’t mind being in the office’. FL