The French freeskier is following in the footsteps of many before him, from his hometown of Chamonix. He claimed his first Freeride World Tour title in 2017, when he was just 23. We caught up with him, back home, after he’d cemented third-place on the 2019 FWT

FL: We’re at the final stop of the FWT 2019 in Verbier, you came third overall, congrats! How would you sum up your season?

Leo Slemett: For me, it was a winter of highs and lows. I was injured for two of the stops of the tour, so I didn’t ski as much as in previous years. On the other hand, since December, when I had to train to do the Eurotest in giant slalom, I’ve had a lot of joy skiing. I’ve been able to do a lot of things that, until then, had just been thoughts in my head, even though I was injured a lot! So it was a rollercoaster of a season, but with some incredible moments. Like everyone, there are days when I feel tired or just don’t feel 100%. On those days I just focus on the basics and then go home to get ready for the next day.

FL: What was your favourite stop on the tour this year?

LS: I have wanted to be on the tour ever since I watched the stop in Verbier a decade ago – I watched Aurelién Ducroz win there in 2009 and 2011, when he won the tour. Since then it’s been my dream, not only to win the FWT, but to ski the Bec des Rosses, Verbier’s mythical 3223m peak. That final face holds a special place in my heart. I ski the whole season to have the opportunity to show my riding there in Verbier.

FL: You were FWT champion in 2017 and have competed in many more, would you say the variation of locations, and freedom to choose your line, make it even harder to defend a title?

LS: We often ski on the same faces, but every year they are different. The snow conditions, the effect of wind, and the level of skiing that also evolves… Every year we put on a different show, even on the same mountains. That’s something I like about the FWT; I don’t think of myself as one of the best skiers, I’m just one of a group of skiers that push forward together. Since I’ve been on the FWT, I’ve never repeated any of my runs. That’s not always easy, but it’s helped me to improve as a skier.

FL: Are you a competitive person or do you just enjoy skiing around the world with friends on the tour?

LS: I’m competitive with myself! I love skiing with my friends and I love to travel, so I love what I’m doing at the moment. I also like to do things properly; I’m quite demanding, that’s why I like competitions – it means I have to ski well.

FL: Coming from Chamonix, home to some of the best freeride terrain in the world, were you essentially training for the FWT since you first clipped into a pair of skis?

LS: No, when I was younger I did only alpine skiing, then I was in the ‘Candide Thovex generation’, with all the videos and the X Games competitions. So when I was younger, I wanted to be a pro freestyler, freeride came much later. Obviously the playground we have in Chamonix, the epic mountains, and the fact that it is home to people like Aurelién Ducroz, this all inspired me. At the age of 16, I entered my first junior freeride competition and since that day my goal was to be an athlete on the FWT.

FL: Were you disappointed the tour didn’t stop in Cham this year?

LS: No, not really. Chamonix’s great, but I prefer to just have fun with my friends when I’m here. I’d love there to be another FWT stage in the Alps: Italy, Switzerland or somewhere else in France, but it doesn’t matter if it’s in Chamonix.

FL: What has been the highlight of your ski career outside of the FWT? You’ve skied in some pretty exotic places, any stories?

LS: I hope I still have some highlights to come! Last year I was in Pakistan for five weeks. That was one of the best trips I’ve had. We didn’t have any specific idea of where we should go, we just walked a lot and used Google Maps and different apps to find mountains where we could ski.

On trips like that, I’m just grateful that skiing has taken me to these places. I’m going to Alaska in a few weeks’ time and I hope I still have even better adventures. I love travelling, but I’d say that Pakistan has been my favourite trip so far.

FL: Do you ever have a relaxed day of cruising the pistes anywhere?

LS: Totally. Yesterday I was at Flégère with a group of friends. We were hitting jumps by the side of the pistes, messing around all day and it was one of my favourite days of the season. I just love skiing, it doesn’t matter where, it could be down a steep couloir or it could be with friends on pistes. I have no favourites, as long as I’m on skis.

FL: Do you have dreams in skiing?

LS: Yes, I still have dreams in terms of competing – there are things I want to show and I have dreams for myself. I think it’s important to have dreams: winning is good, to win again is even better. Climbing is good too, and climbing new mountains is a special type of freedom.

FL: Who are your ski idols? Who do you turn to for inspiration?

LS: I watch and learn from many skiers, but I think Candide Thovex has to be my main inspiration. I don’t know him personally, but I’ve met him a few times. I have a big respect for him, the skier he is and the person he is. I take inspiration from many athletes and the perseverance it takes to get to the top.

FL: What are your interests outside of skiing?

LS: I love surfing, I go every summer to the south-west of France. I’m really getting into parapenting too. I love to try new sports, I think it’s interesting to be rubbish at a sport, because you can always improve. In skiing it’s hard, because I always need to be on form, that’s why it’s so fun being a beginner. I love playing golf but I am so bad at it!

FL: What are your plans for next season and beyond?

LS: I will be back on the tour, I want to improve in the mountains, be a better climber and a better steep skier. My main ambition is just to be versatile in the mountains. People think I’m old, because I’ve been on the FWT for a while, but I’m still only 25! 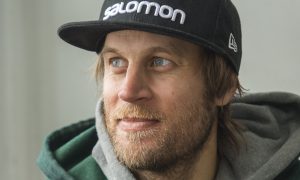 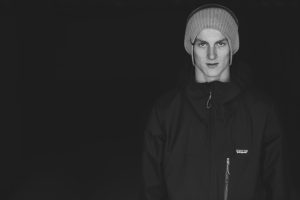 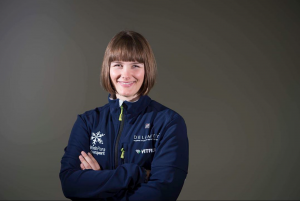