Alf Alderson enjoys four adrenaline-packed days in the Three Valleys, with the first day being a guided tour of the world’s biggest ski area with local freeride legend Jérémy Prévost.

09:00 I’m standing outside Goitschel Sports 2 in Val Thorens with four other journos/PRs/general hangers-on, feeling slightly trepidatious as we’re about to meet and ride with one of the world’s best freeriders, local legend Jérémy Prévost.

Jérémy has scored several top 10 placings on the Freeride World Tour, including a third overall in 2010/11 when he was also the youngest rider on the tour; I suspect that skiing with five mildly hungover, middle-aged journos from the UK may not be his idea of the best way to spend a Saturday.

09:05 We’re wondering where Jérémy is when one of our number, Tom, looks behind us to see some bearded bloke kitted out in some pretty snazzy Black Diamond kit hanging about looking a bit bored – turns out it’s our man.

09:11 This being France we start the day with espressos all-round, which gives us a chance to introduce ourselves. First impressions are favourable – well, on my side anyway. Jérémy comes across as an affable, easy-going guy and the only time words like ‘couloir’, ‘steep’, ‘air’, and ‘fall’ are mentioned is when he’s describing his own experiences of plunging down scarily steep slopes as opposed to describing what we might be doing with him later today. Phew…

09:20 We’re riding up on the Cascades lift, and there’s a slight feeling of frustration in the air; here we are with the best guide you could have for discovering the Three Valleys’ world-class freeride terrain and we’re not going to be accessing any of it. Jérémy has quite reasonably pointed out that the combination of recent warm weather and high winds has made the off-piste terrain pretty unpleasant and not much fun at all, so he’s going to give us a tour of the area on-piste.

Despite the disappointment it’s also quite reassuring to know that even someone who can smash it in any conditions sees the sense in not heading on to crusty, hard off-piste just for the sake of it.

09:22 On the way up Jérémy points out the Bee dual zip line – on Monday we’ll be giving this a shot. You actually ‘race’ against a fellow ‘bee’ flying alongside and apparently it’s an absolute… buzz (sorry).

11:00 By now no one is in the least frustrated. Jérémy has used his immense local knowledge to hit each piste just as the spring sun is softening it up into what I call ‘Goldilocks conditions’ i.e. just right. We’ve had a blast around VT before heading up to the Col de la Chambre and over to Méribel, where we hoon down into Méribel Mottaret like men possessed on sunny, virtually skier-free slopes.

11:09 On the way we pass DC Area 43 Snowpark, where tomorrow I will find myself hitting the boardercross course as part of Team 199 in the Three Valleys Enduro along with fellow journos Seb and Ian. (Like many of the 10 events we take part in during the course of the Enduro, our performance is pretty farcical; Seb gets his ski pole caught around the start gate and Ian and I fly off the course part way down to avoid a skier who went before us and wiped out and ends up lying across the course like an upside down beetle. Needless to say, our time is not up amongst those of the leaders.)

11:20 “Good, hey?” says Jérémy with a grin. He’s taken us up to the top of the Olympic chair from where we hit the Roc de Fer piste and absolutely cane it back down in sublime, grippy spring snow. By now quads are beginning to ache just a tad, although needless to say Jérémy looks like he’s hardly trying. Perhaps sensing that our puny legs are no match for his, he suggests we head up to Mont Vallon for one last, long descent before lunch at the Plan des Main restaurant.

12:30 The wind is howling at the top of 2952m Mont Vallon as Jérémy points out the vast areas of freeride terrain immediately beneath us and, for those prepared to hike, across on the slopes beneath 3153m Mont du Borgine. If only…

12:35 Reluctantly but perhaps wisely turning our backs on all this potential off-piste joy, we set off down the Combe du Vallon piste and are tempted to head off the side into choppy but still relatively powdery snow. The skiing is tricky but there’s the odd patch of ‘proper’ pow, and needless to say where we struggle Jérémy floats, skips and bounces with ease.

It’s fun, but not great, so we eventually surrender to the inevitable and hit the piste again. We go full gas all the way to the bottom, knowing that our legs can have a break as we wolf down huge salads and yummy raclette in the Plan des Mains restaurant located at the bottom of the Mont du Vallon gondola.

13:30 After lunch we continue our tour, heading over to Courchevel; we’ll be here again tomorrow, slip-sliding our way down a tricky little gully off the top of the Saulire on the ‘freeride’ section of the Three Valleys Enduro. (Visibility for the event will be virtually zero, unlike today, and I reckon even Jérémy would have struggled (a bit) – I certainly did.)

Today however, the sun is shining and the pistes remain marvellously uncrowded as we zoom down to Courchevel 1850 to hop aboard a series of lifts that take us up to 2305m Col de la Loze above La Tania.

14:30 The Col de la Loze is going to become a major venue for us over the next couple of days; tomorrow we take part in the ‘biathlon’ leg of the Enduro here (something we actually get right) and on Tuesday we’re paragliding off the col for some of the most exhilarating alpine views available.

Today, however, it becomes a focal point for a series of laps back down into Méribel as the snow becomes increasingly soft and my legs becoming increasingly spaghetti-like.

15:30 Jérémy suggests a beer might be good idea. Top bloke. After a final blast down from Col de la Loze into Méribel centre we stagger across to the Hotel Eterlou, our base for the next two days, and flop down in the sun with a cold one, knackered and content. Which just goes to show that you can enjoy a great day out with an ace freerider without going anywhere near the backcountry. Local knowledge, see…

A local’s guide to Meribel

A local’s guide to Val Thorens 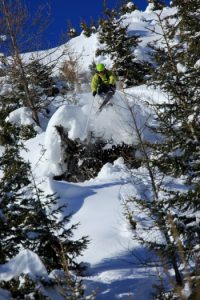 5 giant area season passes to save you money this winter