Today Salomon announced something we at Fall-Line have been waiting for for a long time: a pin tech touring binding that skis like an alpine binding.

We’ve been waiting for this since the Marker Duke first burst onto the scene. It was too heavy and inefficient for real touring, but it brought the first tantalising glimpse of real ‘freeride touring’.

The Kingpin and the Beast came next – much better than the Duke going uphill, and much better than older tech bindings going down, especially in powder. But still not quite the same as an alpine binding skiing fast in inconsistent snow. Strong and durable certainly, but there’s still just something lacking about the actual feel on snow.

And that’s what the S/LAB Shift promises to bring to the table: the smooth confident feel of an alpine binding for the descent, married to the efficiency of pin tech for the ascent. 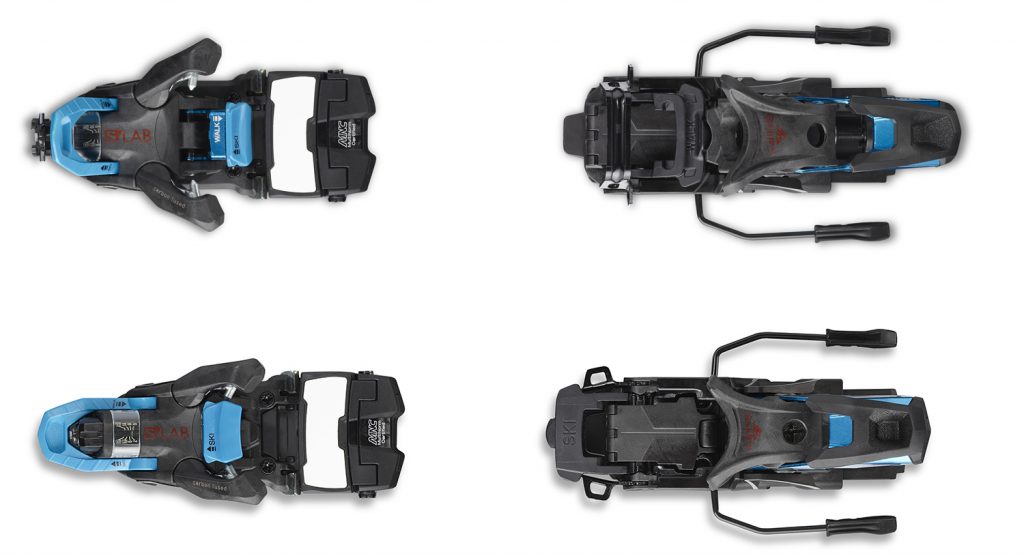 Top: Shift in touring mode with the pins exposed
Bottom: Shift with pins tucked away for the descent

It will work with every adult norm boot, including alpine, hybrid WTR/Grip Walk or norm certified rockered sole, and is fully certified to full alpine release and safety norms – unlike any other tech touring binding (including the Tecton).

According to Salomon, the Shift should be available on sale in September 2018, though we hope to be able to test them at our annual ski test this winter.

What you need to know about the Salomon S/LAB Shift binding: 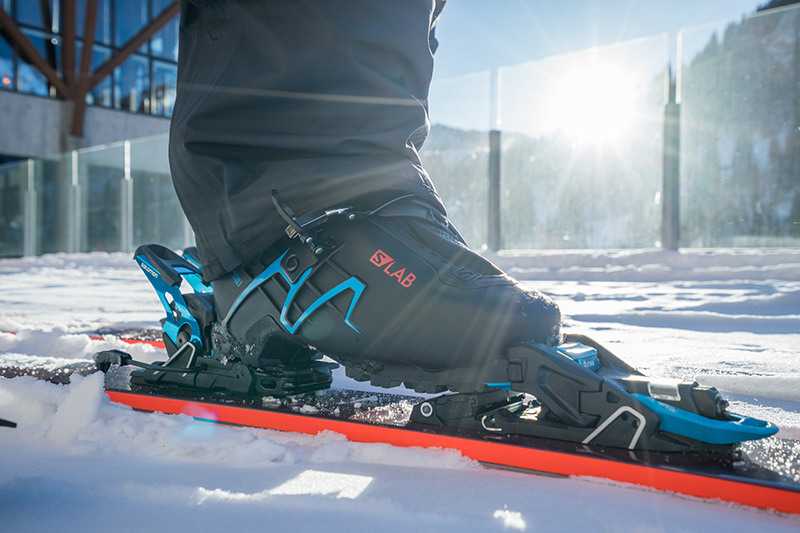 What the athletes say about the Salomon Shift

“When it comes to the toe piece of a tech and this toe piece there is a drastic difference in feel. Tech bindings have little to no elasticity, meaning every shock and vibration from the ski goes straight into your body. But when in comes to MX, the power transfer capabilities are similar. So essentially to me, it feels like it has the edge to edge power of an Alpine binder or a locked out tech binder, but without the jarring shocks of a pin.

Otherwise yes, to me it crushes the frame binding…but ultimately it provides a level of downhill consistent releasability not seen in something like the Tecton, Kingpin or any other tech binding. It’s a true and true alpine binding for the down but doesn’t pick up the heel and pivots on the toe like a tech binding.”

“The Shift allows people to climb and ski at their top level in the backcountry with no compromises.”

The Shift binding in Action

Photos and videos are starting to emerge of the S/LAB Shift in action, released via Salomon and Atomic athletes.

Here’s Sage Cattabriga-Alosa putting them through their paces uphill:

#pinsareforclimbing #shiftyourperspective 7+years of collaborative efforts are bringing a new weapon to the table. Stay tuned for the reveal tomorrow from @atomicski and innovation partner @salomon.

Oh, Ullr has been kind so far this season. More dreamy turns from the past few days. The most revolutionary ski product of the past decade (IMO) may, or may not, make an appearance in this clip. Tune in to the @salomon channels tomorrow to see what all the hype is about. #holyshift #timetoplay #skiing #salomon

ANNECY, FRANCE — After nearly a decade of in-depth research and development in close collaboration with some of the best freeskiers on the planet, Salomon will unveil the new S/LAB SHIFT MNC binding for backcountry ski touring for the 2018-2019 season.

The Shift ushers in a new generation of freeride capability by delivering downhill performance, touring capability and lightness so skiers can earn their turns by touring uphill, then confidently charge big lines and stomp big air on the descent. It is the first ever truly compromise-free solution for skiers looking to push the boundaries of the mountain and their skiing, blending the freedom and touring efficiency of a pin binding with the power and transmission of a Salomon Alpine binding.

With MultiNorm Certification (MNC), Shift is the only hybrid binding that is compatible with all norm boots on the market (from traditional alpine boots to touring boots). The Shift is also TUV-certified, delivering the safety a skier needs regardless of the type of ski boot he/she uses.

The S/LAB Shift binding was created to meet the needs of a core group of freeriders who are evolving the sport in a new direction by placing an emphasis on earning their turns by touring uphill. Longtime Salomon freeski athletes Cody Townsend, Chris Rubens and countless others who spend the bulk of their time in the backcountry have worked closely with the company’s Alpine R&D team for a number of years to develop the Shift.

In fact, the idea was first broached by the athletes at a team meeting in 2012, when they told engineers that there were no bindings on the market that truly met their needs. Since then, the company’s Alpine R&D team has developed countless prototypes based on athlete feedback to arrive at a finished product that meets their substantial demands and breaks new ground in the binding category.

“There was no blueprint that made you think something like this could be achieved,” says Townsend, who has been involved in the testing and development process of Shift since the beginning. “We said to the R&D guys, ‘If you could make a pin binding that tours like a pin binding but skis like a normal binding, that’s the holy grail, that’s the dream.’ I’ve been really impressed with the design, test, feedback and approval process. It was an engineering feat to get it done. The very first prototypes were so different than the final product, and in the last three years we have seen rapid improvement in the technology and the performance. All of a sudden, the power transfer was there.”

An adjustable pedal toe is what allows the Shift’s compatibility with all norm boots on the market. Based on the boot you’re using (alpine or touring model), you can adapt the binding to suit your boot via an easy-to-use screw. Then the real innovation begins.

By creating an alpine toe piece that integrates pins, the company created the first hybrid binding that delivers ultimate versatility. On the uphill, the pin enables the skier to move efficiently and conveniently by placing the rotation point close to the metatarsal area of the foot and offering a 90-degree range of motion. In addition, a variety of simple manipulations can be used to adapt to terrain changes as the skier climbs. 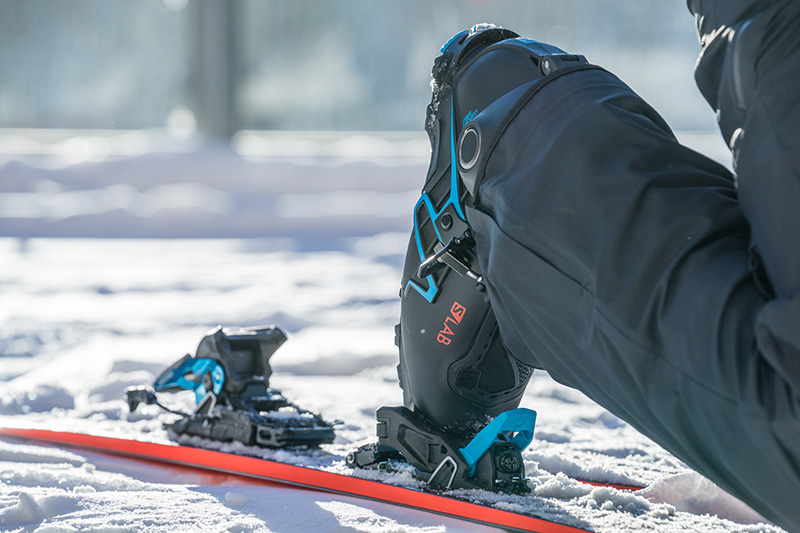 For the downhill, the binding can be switched in seconds from touring mode to ski mode. A lever in the toe is the key to allowing the toe piece to transform from a touring setup to alpine. By lifting the lever up into ski mode, the wings close into a traditional alpine binding shape. Then the skier steps into the binding the same way he/she would to a traditional alpine binding, and with the same confident feeling.

The Shift delivers pure freeride performance with regard to power transmission and safety due to the elasticity in the wings that absorbs shock. In fact, the Shift has the same level of shock absorption as the highly regarded STH2 Binding.

On the heel piece, a lever switches from touring mode to ski mode in one movement. Even at just 1.7 kg per pair (3.7 lbs), the Shift’s strong combination of carbon-infused PA, steel and aluminum delivers a reliable construction. This is the first time carbon-infused PA has been used in alpine bindings, which helped achieve the strength-to-weight ratio needed in the Shift for both touring and descending. The DIN setting on the S/LAB Shift ranges from 6-13.

“You don’t realize how much technology goes into a ski binding because you just click into it, but they release in ways that protect your knees, your bones and your other ligaments,” Townsend says. “They release when you need them to, and stay on when you need them to. That was the ultimate goal with the Shift; to have a binding that tours easily but lets you ski how you want to ski—with no compromises.”

According to Solene Chappaz, Product Line Manager for Alpine Bindings, the fact that the binding was athlete-driven has led to a product that has been tested to the limits.

“For our freeride athletes, the binding is very important because it delivers the safety they need,” Chappaz says. “Our global athlete team is very demanding, and there has been a lot of feedback from them during the development years trying to challenge the product. It’s a good thing that they are demanding because we know that when they are happy with a product, it means the product delivers what we set out to do. And, of course, having their endorsement is likely to have a huge impact on the success in the marketplace.”