82 days. 1075km skied. 473 hours on the move. We follow British Mountain guide Tania Noakes’ quest to ski across the Alps during one winter 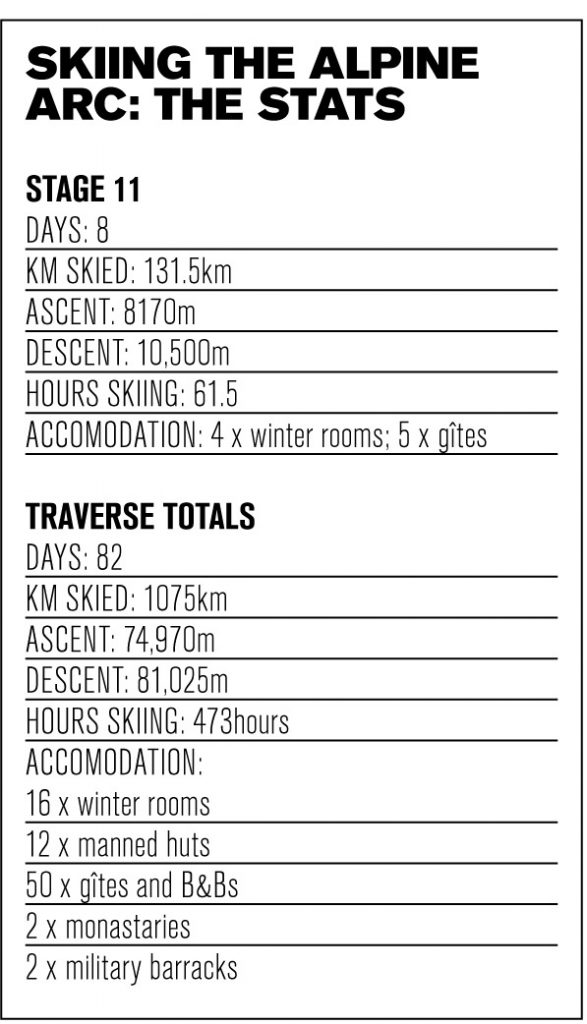 The idea of skiing across the Alps during one winter had been brewing for years. It fermented slowly in my subconscious. I began to read accounts from others; researched ways to link key sections and lost myself in endless maps; and eventually started plotting down on paper. Qualifying as a mountain guide helped me realise that we must commit to our dreams if we are ever to realise them. From that moment I knew that my path to traverse the Alps on skis had already begun.

Before working as a mountain and ski guide in Chamonix I was in the British Army. I left in 2002 to train for my IFMGA qualification, but continued serving as a Reservist.

I now balance my guiding work with leading adventurous training for the British Services. So when I committed to the idea of traversing the Alps on skis, I also knew that I wanted to generate opportunities for other Service skiers to join me. That, in essence, formed the kernel that grew to be Exercise Alpine Arc 2015 – a series of 11 consecutive, linked ski journeys through the Alps, from Puchberg am Schneeburg in Austria to Menton on the Mediterranean coast of France. Each stage creating an opportunity for six more skiers to share this great adventure. A journey accumulating well over 1000kms, almost 80,000ms of ascent and descent and taking 82 days to complete.

The three months of Exercise Alpine Arc 2015 now form such a rich and varied collection of memories that it’s hard to know where to begin sharing with you what happened. Memories interwoven into such a vast fabric of experiences, and so completely, that it’s difficult to identify a single thread on its own.

But, to offer you a taste of what’s out there I’d like to tell you about the final leg – stage 11 – of our journey. The eight days that took us from the Col de Larche in France, which forms the border between the Cottian Alps and the Maritime Alps, to Menton near Nice.

The final stage of our traverse passed through a quiet yet unforgettable mountain range in the Southern French Alps called the Mercantour. The most logical line closely follows the frontier between Italy and France due south to the Mediterranean sea.

I had mixed emotions meeting my team for the final stage at the Col de Larche. The majority of the journey was already behind us. An adventure so long yearned for, with so much invested in it, and so many powerful and emotional memories formed already… a suppressed awareness was growing inside me that this unique project was almost over. 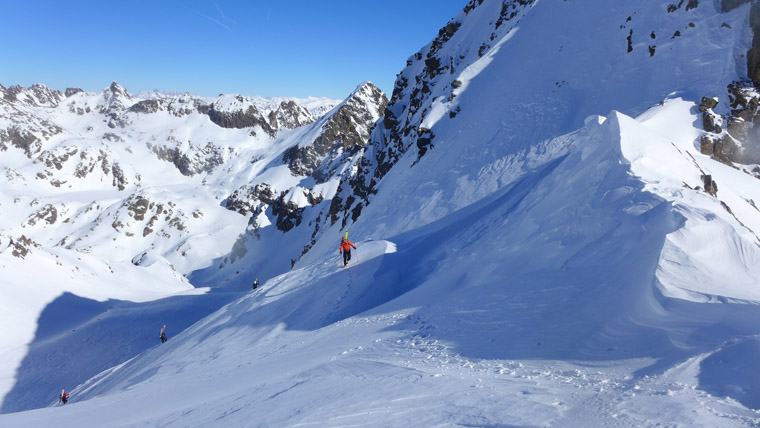 Yet for the five new skiers joining me for this final stage (a mix of old friends and new faces – all of them solid skiers and most skilled using crampons and ice axes), it was the start of their adventure. We would need to focus on each day as it came.

I was already familiar with the route, having crossed the Mercantour before with a friend in 2009. I knew it to be one of the most rewarding ski tours of the Alps. Although non-glacial, it covers a variety of interesting terrain with some challenging steeper sections in ascent and descent. The key section traverses the mighty summit of Mont Ténibre at 3031m. To sum it up, it’s a tour that rarely disappoints.

Over dinner in the gîte we discussed the route, options if we needed to make changes, the current conditions and avalanche risk close to the steep crests. Everyone was excited and eager for the coming adventure…

The morning dawned bright and cold as snowploughs cleared the road through the col. Fresh, untracked slopes extended southwards, sparkling in the sun with invitation and promise. Further north, Chamonix was being battered by much worse weather comprising high winds, heavy snowfall and an avalanche hazard rising to Cat 4. The weather charts suggested we couldn’t be better positioned.

The first day of stage 11 (day 75 of my whole  journey) would take us over four cols, covering 17km to reach a winter room at Refuge de Vens, an unmanned mountain hut with basic sleeping facilities where the terrain is uninhabited and remote.

Skinning in the fresh snow was laborious but steady. There were two long valleys to ascend, a short steep drop and some soft sweeping turns linking the two. Then a narrow ridge crest on foot until it broadened. Then fast, clipped turns switching flanks to keep height and line until we gained safe passage over the final col to our first winter room. 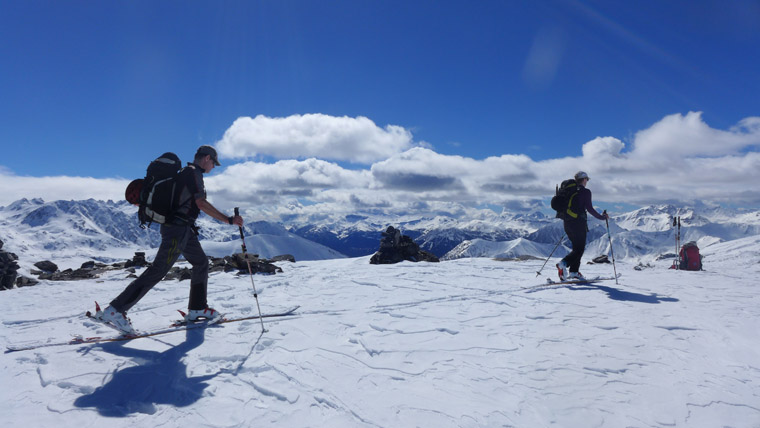 Skinning in the fresh snow was laborious but steady

It was a tired but satisfied group that arrived at the refuge in the early afternoon after seven hours of continuous effort. The beauty of this remote spot more than made up for any missing creature comforts. Before long, Dave and Ruth had the wood-burning stove coaxed to life and we were enjoying the last of the sun’s rays and easing tired muscles before dinner.

Evening meals in remote winter rooms comprised rehydrated packet meal supplemented with salami, cheese and other little luxuries, the weight of which was divided up and carried by all group members. At no stage on the traverse did we have to carry more than three days’ food thanks to the tireless work of our support team, who met us where road access allowed). By candlelight we studied the maps for the next two days, made up of one short day traversing Mont Ténibre, followed by one linking several long remote valleys to Isola 2000.

We left the refuge just before 7am, with time to spare, but when fingers are cold and communication made difficult by the wind, time slows down. The sky, though crystal clear, had enough snow streaming from the ridges to send shivers down your spine.

Approaching Mont Ténibre requires the crossing of a subsidiary ridge at the Brèche Borgonio, a short steep section exposed to the fierce northerly winds. Hoods up, googles and mitts on, transitions in cold snow, fiddling crampon straps in place, lashing skis to rucksacks… trying to move steadily, rhythmically, safely, clutched at roughly by invisible hands… bitter cold. What should have taken minutes seemed to take forever.

Finally we regrouped on the other side, sheltered below Mont Ténibre, madly swirling snow devils at its summit. We wriggled fingers and toes to restore blood circulation, making the most of the warm sunshine and temporary reprieve. Looking up, I knew it was going to be a battle up there on the main ridge. And it was!

That day we covered 8kms in nine hours, overcoming wind-blown hard-pack, ice, and man-eating sastrugi (wave-like hard ridges of snow) interspaced with pockets of soft corn, rewarded with a few effortless floating turns and then… ankle-grabbing breakable crust. The winds had blown any fresh powder to another valley that day! Sometimes skiing off-piste offers only the satisfaction of a job well done.

Battered by the wind, drained of energy by the cold and frustrated by difficult skiing conditions we finally reached the shelter of the Rabuons winter room.

We rose early and chose to reach Isola via a descent into Italy through the beautiful Vallone di San Bernolfo towards Callieri and then the Passo Tesina. Though 22km long and taking 11.5 hours, the day included a memorable 1500m descent from the Pas de Corborant with fresh tracks in deep powder, a quiet untracked ascent of Vallone Tesina and a true sense of satisfaction and a stunning sunset on gaining the Col de la Lombarde above Isola, as we passed back into France. 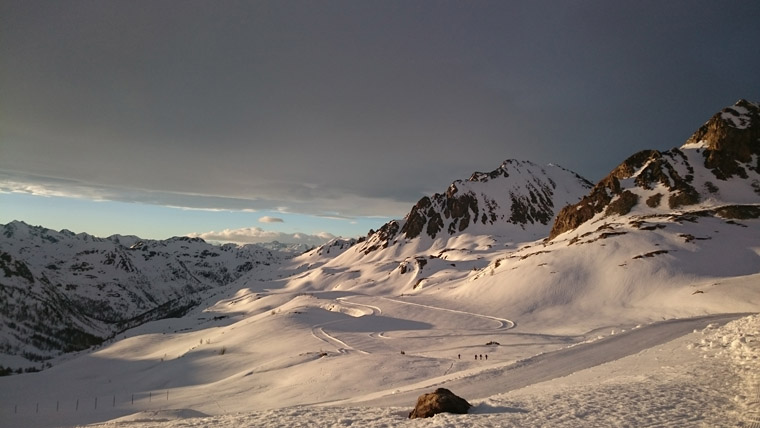 Not too shabby: ascending the Col de la Lombarde on day three

Our legs so tired that racing down the fresh corduroy at dusk had never felt so good, nor been so welcome!

DAYS 4-7
From Isola, the touring terrain mellows and is less committing. We were able to make some shorter days and enjoy our remaining time in this wonderful area at a more leisurely pace. As we continued south we seamlessly passed from winter snowpack to spring corn snow. The snowline began to creep up the hillsides and we all started to wonder at what point the snow might actually run out. 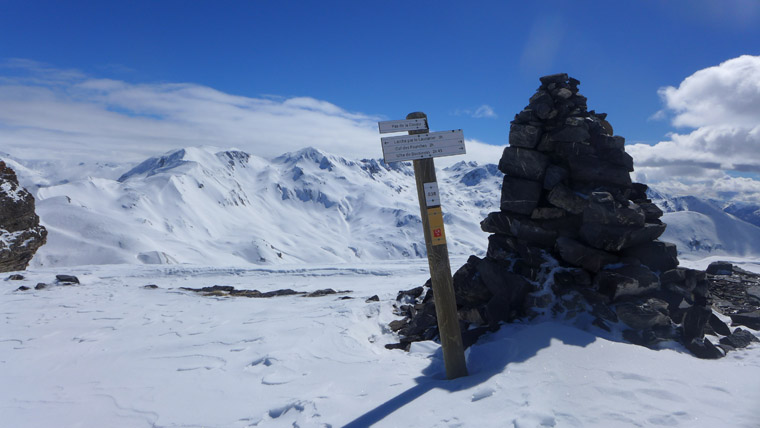 After descending the Col de Salèse to the road-head just above Boréon, I encountered a very memorable marker. My first signpost which mentioned our ultimate destination: Nice was only 72km away.

From Boréon we made a few short hops linking the Refuge de Nice and Refuge des Merveilles before our final day on skis arrived.

DAY 8
We left the Mercantour at the 2400m Pas du Diable col. Looking north the mountains stretched out to the horizon, still firmly locked in winter, but south of the col the landscape abruptly changed. A long sinuous ridge of russet browns and greens dropped gradually to the sea. Standing on that col was a profound and moving moment for me. It was the first time I could allow myself to believe that my adventure was almost over.

We embarked on linking, ever-diminishing, patches of melting snow, crossing slopes littered with budding crocuses. Tomorrow we would dive into that sea and celebrate our success buoyed by the fizz of champagne.

But on that final col I needed a few minutes to catch my breath and rationalise the deep sense of relief that washed over me. A heavy burden of responsibility born continuously over the preceding months began to lift, and a kaleidoscope of wonderful memories suffused me. Moments of great beauty, the mountains in the half-light of dawn; the flickering of the wood burner in the winter refuge; a smile shared with friends in recognition of a challenge overcome; the clean line of our skinning track left behind as evidence of our passage through a vast white ocean. The knowledge that not a single trace of our passage across the Alps now remains.

Every day I learnt something new; about the mountains or those around me with whom I shared this unique journey, and also at times about myself. This stands out in my mind as the best part of the experience.

Although there were many enthusiastic supporters who backed the project, there were also those who saw the idea as overly ambitious and destined to fail. If I had listened to those detractors and been unwilling to take the risk, one thing at least is certain in that I would have had to accept immediate defeat by not trying. I for my part am very glad that we tried, and even more satisfied that we succeeded. FL

Words and photos by Tania Noakes, a IFMGA Mountain Guide and BASI Nordic ski teacher. Based in Chamonix, she has been leading ski tours in the European Alps and overseas for over 10 years. She is sponsored by Salewa and   can be contacted either through classicclimbs.com or via her Facebook page.